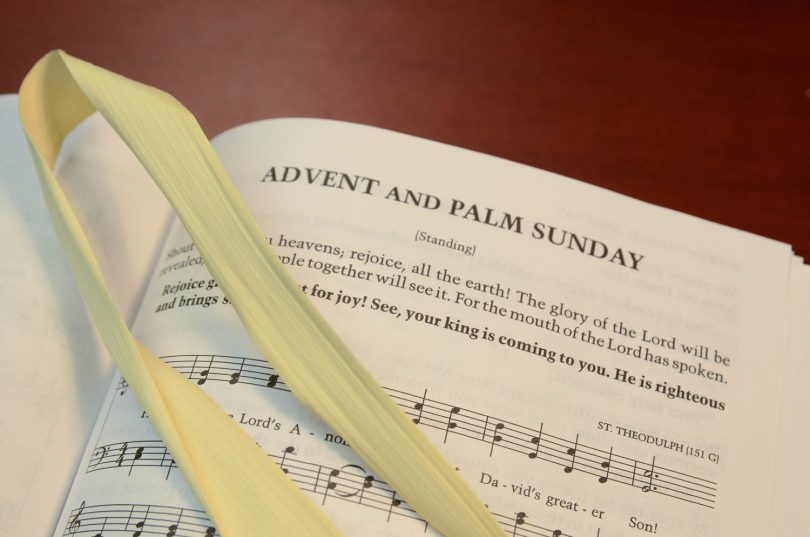 This month, we share writings based on Mark 11:1-11. This Bible text is for “Palm Sunday” in Lectionary Cycle B of the Revised Common Lectionary used by the Moravian Church.

While visiting Duluth, Minnesota, last year, I had to take the city bus to get to my destination downtown. I encountered all kinds of people while waiting at the bus stop in this poor, working-class neighborhood. . .One man with a learning disability told me which bus I needed to take for my destination. . .One man talked to himself, answered his own questions, and paced back and forth but never rode the bus. . .One youth listened intently to her music flowing out of her earbuds off of her iPhone, oblivious to her surroundings. . .One man sat next to me speaking on his cell phone to the friend he would meet really soon. . .One man shuffled by us in his flannel PJ pants, pushing his cart, toting his ZZ Top beard and donning a dirty ball cap.

We all waited for the bus, looking down the street with a tired sadness hovering in the air over the bus stop.

When the #3 bus arrived, we all lined up, swiping the metro cards—except for me. I dropped my three quarters into the slot for my fare. Off we went.

The bus buzz of triumphant victory parade faded rather quickly for Jesus by the end of the week, when Jesus’ disciples had abandoned him and tossed him under the bus, for fear of their own lives. Sadness and regret flare up throughout the sharing of this week’s Passion Week readings.

Prayer: Heavenly Comforter, come along beside us as we seek your healing in our lives for the sadness in life that we harbor. Amen.

With one week to go before Easter, I suspect you already have some plans in place. Maybe you already know for what time you’ll need to set your alarm in order to make it to sunrise service…or that you will not be going to sleep at all on Saturday night because you’ll be playing the trombone or the clarinet in the Easter band…or that you’ll be having eleven people to dinner at your house and have ordered a ham, shopped for carrot-cake ingredients, and decided which tablecloth and napkins you’ll use…or that there will be dyed eggs to hunt down, round up, and collect in baskets.

Chances are, you have already been quite deliberate in preparing for the special day. After all, you can’t just throw these things together at the last minute if you want them to leave an impression, can you?

Jesus was purposeful in arranging details for the demonstration we would come to call Palm Sunday. He designed the effect he wanted to evoke. He thought ahead and reserved an economy-model colt (not a showy warhorse). He set it all up, premeditated. He put things in motion when he sent two disciples to fetch his ride.

Jesus was profoundly deliberate, wanting to make a provocative statement. He meant to deliver the message that his God-branded leadership was very different in nature from the leadership of others with power—warriors, kings and politicians. He meant to leave an indelible impression as he kicked off what would become a turning point in all of history.

Be deliberate through this Holy Week, not only when it comes to the details of getting ready for Easter, but in contemplating the reasons Jesus both orchestrated and submitted to the events that make Easter even possible.

A “triumphal” entry? Not unless one appreciates the irony of the prophet’s oracle: “Rejoice greatly, O daughter of Zion! Shout aloud, O daughter Jerusalem! Lo, your king comes to you; triumphant and victorious is he, humble and riding on a donkey, on a colt, the foal of a donkey” (Zechariah 9:9).

A king on a donkey, triumphant and victorious in his humility! Not exactly the image of a conquering messiah of the line of David, is it?

The evangelist knew this prophecy. For him, it was compelling evidence that Jesus was the Messiah—though not the conquering military hero anticipated by so many. Ched Myers, in Binding the Strong Man: A Political Reading of Mark’s Story of Jesus, calls this scene “political street theater” and concludes that “the theatrics of the procession may have been meant by Mark as a kind of parody, contrasting Jesus’ destiny of the cross with the popular messianic expectations of the disciples/crowds/readers.”

One of the hardest things about Christianity is getting one’s head around these contrary images of power and glory: a king on a donkey, a throne that’s a cross, eternal life coming from ignominious death. It’s easier to ignore these images and join parades for “King Jesus,” belt out hymns filled with militaristic metaphors, and skip the passion narrative of Holy Week. It’s so much easier to go straight from “Hosanna” to “Alleluia,” ignoring the turn to Golgotha and the cries of “Crucify him!”

Yet these images are at the heart of Christianity, finding their expression in the earliest of Christian hymns (like Philippians 2:6-11). They are the essence of the gospel, especially for Moravians: “The Unitas Fratum recognizes the Word of the Cross as the center of Holy Scripture and of all preaching of the Gospel and it sees its primary mission, and its reason for being, to consist of bearing witness to this joyful message” (The Ground of the Unity).

So, sing “Hosanna” today and “Alleluia” next Sunday. But remember, “Christ, and him crucified, remain our confession of faith.”

When they were approaching Jerusalem, at Bethphage and Bethany, near the Mount of Olives, he sent two of his disciples and said to them, “Go into the village ahead of you, and immediately as you enter it, you will find tied there a colt that has never been ridden; untie it and bring it. If anyone says to you, ‘Why are you doing this?’ just say this, ‘The Lord needs it and will send it back here immediately.’” They went away and found a colt tied near a door, outside in the street. As they were untying it, some of the bystanders said to them, “What are you doing, untying the colt?” They told them what Jesus had said; and they allowed them to take it. Then they brought the colt to Jesus and threw their cloaks on it; and he sat on it. Many people spread their cloaks on the road, and others spread leafy branches that they had cut in the fields. Then those who went ahead and those who followed were shouting, “Hosanna! Blessed is the one who comes in the name of the Lord! Blessed is the coming kingdom of our ancestor, David! Hosanna in the highest heaven!”

Then he entered Jerusalem and went into the temple; and when he had looked around at everything, as it was already late, he went out to Bethany with the twelve.

From the New Revised Standard Version of the Bible, © 1989 by the Division of Christian Education of the National Council of Churches of Christ in the USA. Used by permission.