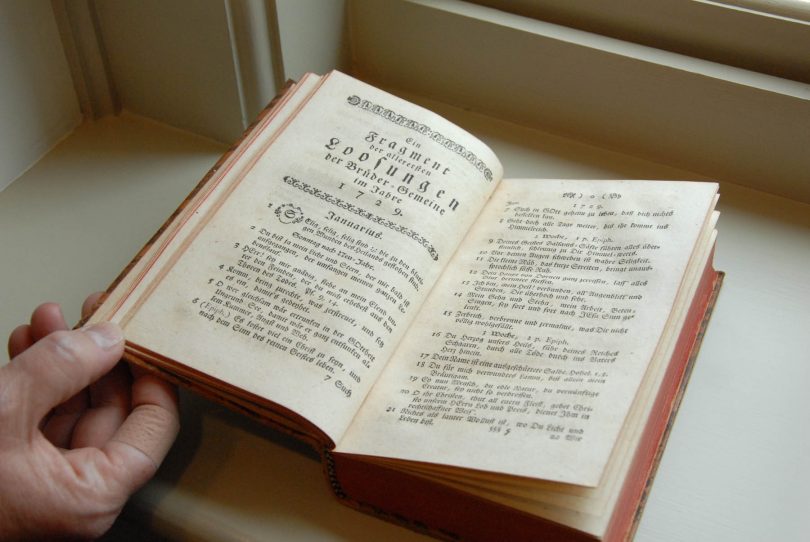 “The steadfast love of the Lord never ceases, his mercies never come to an end; they are new every morning.” Lamentations 3:22,23

The first printed edition of the Daily Texts (Losungen) was published in Herrnhut, Saxony, in 1731. The title page of that edition quoted the passage from Lamentations and promised a daily message from God that would be new every morning. It was an outgrowth of a spiritual renewal of the Moravian Church (Unitas Fratrum) that dated from August 13, 1727.

In 1722 refugees from Bohemia and Moravia began arriving at the estate of Count Nicholas Ludwig von Zinzendorf (1700-1760), where he gave them a welcome and land on which to establish the settlement of Herrnhut (“Watch of the Lord”).

Each day the settlers came together for morning and evening devotions, consciously placing their lives in the context of God’s Word. On May 3, 1728, during the evening service, Count Zinzendorf gave the congregation a “watchword” for the next day. It was to be a “Losung” (watchword) to accompany them through the whole day.

Thereafter one or more persons of the congregation went daily to each of the 32 houses in Herrnhut to bring them the watchword for the day, and engage the families in pastoral conversations about the text.

From this oral tradition, the Daily Texts soon became fixed in printed form. Zinzendorf compiled 365 watchwords for the year and the first edition of the Losungen was published for 1731.

Even in the first editions there appeared the characteristic coupling of a Bible verse and hymn stanza. Zinzendorf called the hymns “collects” and considered them to be the answer of the congregation to the Word of God. The Daily Texts would be a great deal poorer without the mixture of God’s Word and our human response.

The watchword soon became accompanied by a “doctrinal” text. The idea of an additional text grew out of a number of collections of texts from the Bible that were put together by Zinzendorf. Such additional lists (some of them for children) were used for special study within the groups in the community, and they came to be referred to as doctrinal texts.

For the Daily Texts, as for the whole Moravian Church, Count Zinzendorf’s death (May 9, 1760), was a turning point. His co-workers sensed the uniqueness of Zinzendorf’s watchwords, textbooks, and lessons and had them published at Barby-on-the-Elbe in a four-volume collection 1762.

By 1812 it was established that all watchwords would be drawn by lot from a selection of Old Testament texts, and the doctrinal texts would be selected from the New Testament. By the end of the nineteenth century, the custom was established to relate the two texts in theme or thought.

The printing of the Daily Texts  in North America dates back at least to 1767, when the Losungen was printed “at Bethlehem on the Forks of the Delaware by Johan Brandmuller.” The printer’s imprint bears the date of 1767 as well and may have been an extra printing for the German version done at Barby-on-the-Elbe in Germany, where most of the printing was done for the Moravian Church those days.

During the crucial days of the Revolution, the German-language edition was printed in Philadelphia by Heinrich Miller, who had worked for Benjamin Franklin when he first came to America. The daily text for July 4, 1776, was from Isaiah 55:5-“Behold, you shall call nations that you know not, and nations that knew you not shall run to you” (RSV).

English versions were printed in London as early as 1746, and the title page bears the imprint of “James Hutton near the Golden Lion in Fetter Lane.” Hutton was the well-known London printer associated with the Moravian Church who was a friend of John and Charles Wesley in the formative years of their ministry.

The biblical texts for each day are chosen in Herrnhut, Germany, and then sent around the world to those who prepare the different language editions. Since 1959 the edition published in the United States has included a prayer for each day. For this North American edition, the hymns are chosen or written, and the prayers are written by Moravian clergy and laypersons from the United States and Canada. Each month is prepared by a different individual or couple, of a variety of ages, so that the prayers reflect the great diversity of devotion in the Moravian Church.

The physical form of the Daily Texts varies considerably from country to country. Some, like this North American edition, have a separate page for the verses, hymns, and prayers of each day. Others have several days’ texts printed on one page, which makes a thin, pocket-size volume. Some are beautiful examples of the printing and bookbinding arts. Others are simply mimeographed and stapled together.

These external nonessentials pale beside the fact that this little book is probably the most widely read devotional guide in the world, next to the Bible. It forms an invisible bond between Christians on all continents, transcending barriers of confession, race, language, and politics. In its quiet way it performs a truly ecumenical service for the whole of Christendom.

Related Articles:
How to Use The Daily Texts