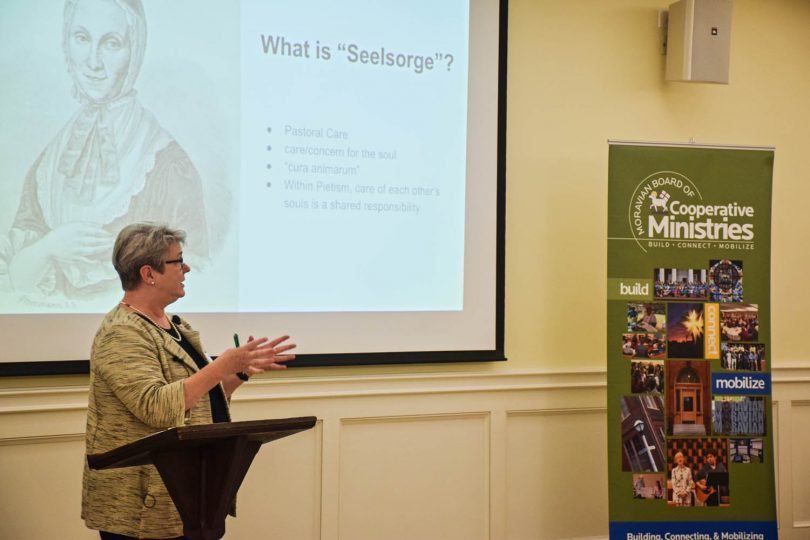 In November, more than 40 Moravians gathered at Calvary Moravian Church in Winston-Salem to hear Dr. Katherine Faull of Bucknell University share her insights into women’s leadership roles in the 18th century Moravian Church. Dr. Faull’s lecture, entitled “Leading the Way: Women in the Moravian Church Through the Centuries” is part of the Board of Cooperative Ministries’ ongoing  Comenius Learning Series.

For more than 20 years, Dr. Faull translated and studied original documents from Moravian archives in Europe and North America relating to the roles of Choir Helpers in developing an awareness of spiritual growth. She found that the Moravian Church has a “remarkable tradition of caring for all members at all stages of life.”

Early Moravian congregations were organized under what was called the Choir System. Realizing the value of group activities and interests, Moravians divided their congregations into groups called “choirs,” usually by gender, age and stage of life.

The Choir Helpers’ instructions convey an amazingly holistic view of an individual’s soul as part of their body and vice versa. They display an unusual awareness of the importance of women’s bodies and concern for self-care. They also highlight a care for and positive view of women outside of childbearing and childrearing roles, uncommon in the 18th century. 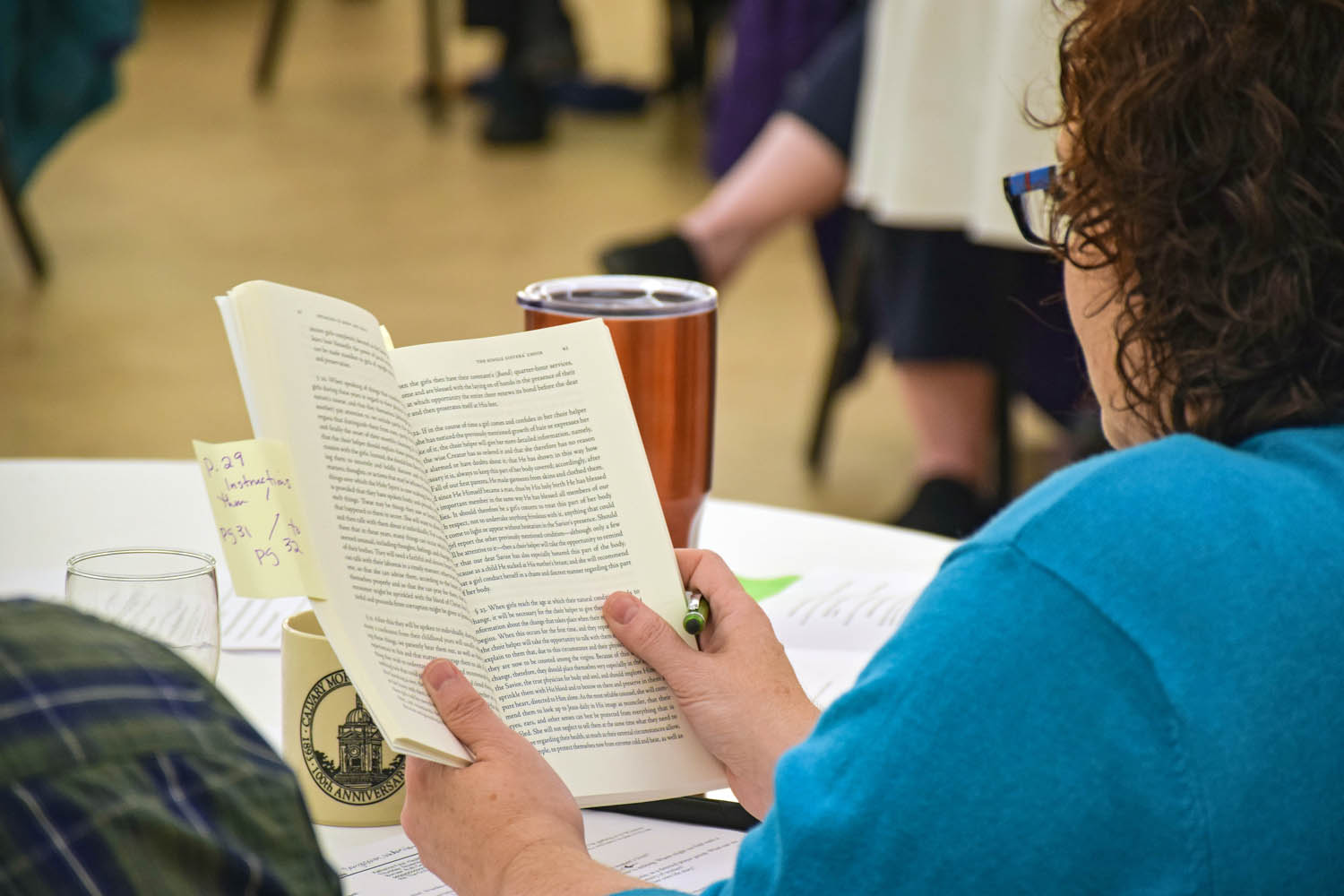 Dr. Faull also discussed her research on the vast collection of Lebensläufe, or memoirs, held in Moravian archives worldwide. This is an incredible historical resource due to its inclusiveness. The memoirs record everyone’s life story across cultures, classes and races, and represented an opportunity for individuals to say goodbye to their church. Count Zinzendorf saw the Lebensläufe as the history of the invisible church. Contained within them are realizations that people can have a direct impact on—and the ability to change their world, their community and their church. The monthly Speakings trained church members to see themselves as agents of change.

Dr. Faull also mentioned an effort now in progress to create a digital resource at MoravianLives.org. This website includes mapping functions as well as transcriptions of Lebensläufe. The mapping function creates a map of all of the places mentioned in an individual Lebenslauf to better visualize all of the places an individual travelled in their lifetime.

A view of Anna Nitschmann

The group took a break to enjoy a delightful luncheon provided by Calvary Moravian Church, then reconvened to hear previously unknown details about the life of one female Moravian Leader, Anna Nitschmann.

According to Dr. Faull, many details of Anna Nitschmann’s life were scrubbed from our Moravian history in the years following her and Zinzendorf’s deaths in an effort to dispel criticism of the leadership roles held by women within the Moravian church. During this  Comenius Learning Series session, Dr. Faull helped shed new light on Nitschmann’s life.

In her lecture, Dr. Faull discussed how Nitschmann served as a religious leader in her own right and was thought of by her contemporaries as a theologian. Because of her particular skills and personality, Nitschmann was sent to America to speak to groups of Lutherans, Separatists, Quakers and others. She was commended for showing great bravery in the mission field and corresponded with leading pietist and mystcist theologians.

Anna Nitschmann’s memoir did not appear in print until 80 years after her death. The handwritten copies in the Archives have been heavily marked out to erase her leadership role in the Moravian church of her day. But many letters still survive which document her role and influence. One of the hymns written by Nitschmann reflects her view on the place of women in the Moravian Church.

“Like a Lamb in the home like a Lion when you roam.” 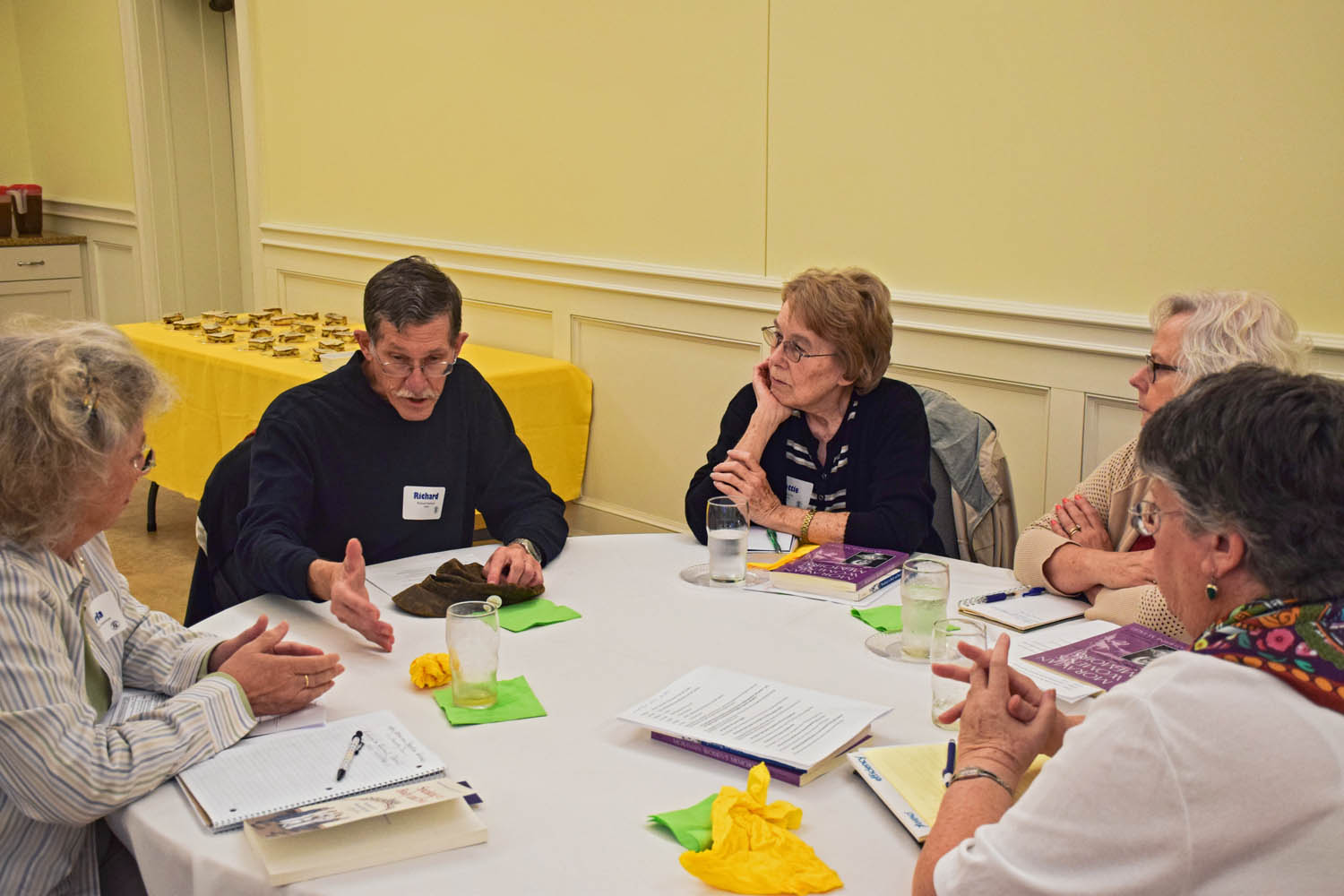 This Comenius Learning Series session helped participants recognize that sharing research about the instructions for Choir Helpers and memoirs of Moravian women from the past help us to not only understand our history, but also reflect on how that past has shaped our present—and how our understanding of the past can affect and change our future. By encouraging self-reflection and sharing, we help to build spiritual awareness in the church today. By recognizing and honoring the contributions of past Moravians, we teach our current and future members that they too have importance, no matter their age, stage of life or economic status. We too can change the world, our communities, and our church.