As part of our ongoing series to share information about key Moravian theology and doctrine, we will be excerpting the Rev. Dr. C. Daniel Crews’ study, Confessing Our Unity in Christ: Historical and Theological Background to The Ground of the Unity. Originally written in 2000 and updated twice, this study looks at the theological and historical underpinnings of The Ground of the Unity, one of the Moravian Church’s core doctrinal statements.

In this installment, we cover the General Synod of 1957 and the writing of the Ground of the Unity. 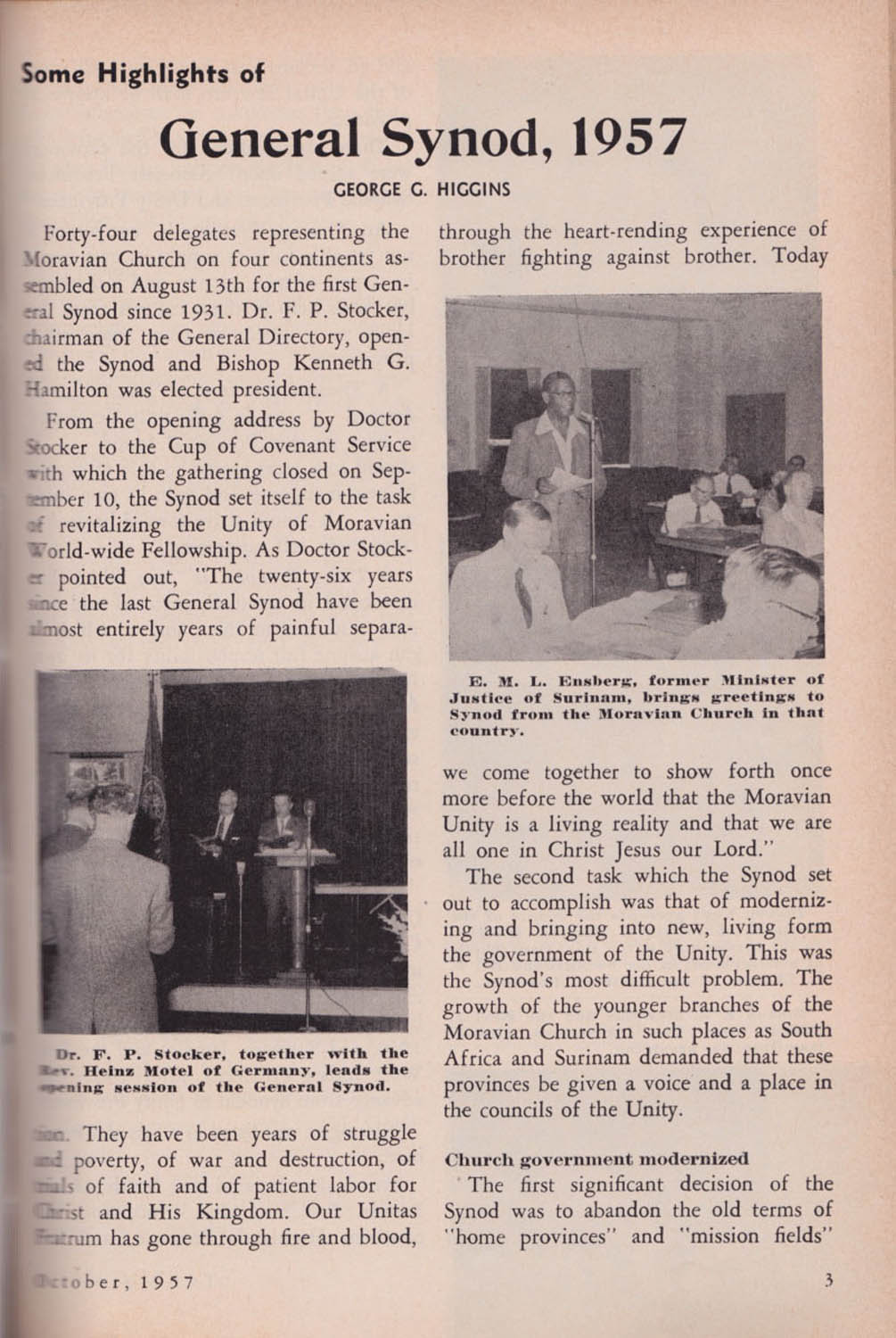 As the delegates to the General Synod gathered in Bethlehem on August 13, 1957, many challenges lay before them. A General Synod had not met for more than a quarter century, and delegates came from countries that had been on opposing sides in another horrible World War. Would the lingering effects spill over onto the floor of Synod itself?1 Furthermore, this Synod faced the potentially difficult task of restructuring the governing system of the worldwide Unity to allow former mission fields to assume their rightful equal place alongside the old “Home Provinces.” It is evidence of the changing character of the Unity that English, rather than German, was declared to be the official language of Synod. In addition, other potentially divisive issues, which some could consider Scripture to have settled clearly, were slated to come before it. These were the ordination of women and the re-marriage of divorced persons. Besides all this, proposals for revising the official doctrinal statements of the church had to be dealt with.2

In fact, a spirit of harmony prevailed from the opening of Synod. The Czech Province was recognized as a full Unity Province, provision was made for several provinces in Africa and the Caribbean to attain that status before the next Unity Synod (as General Synods were to be called in the future), and a process was begun for still other Provinces to move closer to full equality in Unity Synods and in managing their own Provincial affairs. On some issues, specifically the re-marriage of divorced persons, an absolute consensus could not be reached, and the matter was left for the individual Provinces to decide according to their own particular circumstances.3 The ordination of women was approved “in principle,” but here also the decision of whether to do so was left to the Provinces.4 Interestingly enough, much of the opposition to ordaining women came from the American delegates, and a prominent Northern Province leader was quoted in the Allentown, Pa., Morning Call as saying that women ministers “would not be accepted here.”5

It is, of course, with the formulation of a doctrinal statement at the 1957 Synod that we are most concerned. Bishop Hermann G. Steinberg of Zeist in the Netherlands provides a helpful summary of how the document to be known as “The Ground of the Unity” came to be laid before the Synod: The impetus for this:

. . .arose in a large measure from the storm, earthquake, and fire through which some of the Provinces of the Unity, particularly Germany, had passed since 1931. The ‘still small voice’ was speaking to those with ears to hear. Attempts were made to express in words what the Spirit was saying to the Church at the Provincial Synods at Bad Boll in 1949 and 1951. The nearer the Quincentenary and the General Synod grew and the more loudly the Unity of tomorrow knocked at our door, the more urgently we saw the necessity of preparing the ground of the future. During 1955 and 1956 a group of Brethren from the continental Province (Europe) gathered to prepare a draft of a doctrinal statement.6

Given the stand taken by the General Synod of 1909 on keeping the old doctrinal statements intact, and the General Synod of 1931’s declining to deal with a new form of doctrinal expression, Bishop Steinberg had reason to write that it seemed a “hazardous enterprise” to propose this new statement to the Synod of 1957, for as he observes, other provinces had not gone through the “shattering and almost overwhelming” experiences of the Continental Moravians. Still, as Bishop Kenneth Hamilton notes in his “The Ground of the Unity (an Explanation),” the fact that no changes were made in the doctrinal sections of the Results of several previous Synods was not because everyone in the church was satisfied with the current forms, but rather because no specific form proposed could be agreed upon by a majority of the delegates to those Synods.7 Bishop Steinberg attributes to the working of the Holy Spirit the fact that in the new situation of 1957 the General Synod did approve the new statement, and Bishop Hamilton agrees:

. . .the fact that in 1957 the representatives of our world-wide Unity were of one heart and mind in matters of the faith and adopted the new document without a single dissenting vote, may be recognized as the over-ruling of the Holy Spirit and as a gift of grace to our Church from its Chief Elder and Head.8

After the Synod’s doctrinal committee revised and edited the document as to language,9 the General Synod of 1957 in its sessions 26 and 27 on September 2nd and 3rd read and approved each section of the document separately.10 Hamilton says that the full Synod made only one change in the doctrinal committee’s revised draft. This apparently involved dropping a statement on the place of the episcopacy in the “Conclusion” and adding the reference to the Headship of Christ experienced on September 16th and November 13th, 1741.11 Here, as so often before, the Moravian Church exalts Christ, and all else, even that which is dearest to us, is put in second place. As Bishop Steinberg says:

And so it was that a Statement was adopted which attempts to say in the terms of our own day what the Lord’s will is for the Church Universal and for the Unitas Fratrum. Synod gave to this statement the title of ‘The Ground of the Unity’. This name indicates the twofold meaning of the document. First, it points to the one unchanging ground upon which, by God’s grace, our Unity has been founded. Second, it points to the living ground in which our Church is rooted and springs continually into fruit. It points to the very foundation and to the fertile ground-spring at one and the same time.12

Steinberg also goes on to note that Synod directed that “this Statement or Creed should be sent to all congregations of the world-wide Unity, to be read and considered in all the varied languages and in one spirit of adoration, of joy and dedication.”13

Bishop Hamilton notes that the new statement is only about one third the length of the one it replaces in the Results (Unity Book of Order). He continues:

In the second place, the 1957 document represents what is in the main a doctrine of the Church. It contains no specific summaries, for example, of the doctrines of God, of universal depravity, of the two natures of Christ, of the function of the Holy Spirit, of good works as the fruit of the Spirit, of sanctification, or of the resurrection of the dead. Yet much of what was included under these specific doctrines is implied and preserved in the more general terms which the new statement employs.14

“The Ground of the Unity” indeed employs different terms to express itself than did the eight “truths” or doctrinal statements that preceded it. Now the section on Scripture comes not first (as in 1782, 1909, etc.), but later in the document, and in its entirety it reads:

The Holy Scriptures of both the Old and New Testaments are and abide the only source and rule of the faith, doctrine, and life of the Unitas Fratrum.

The Unitas Fratrum realizes that the mystery of Jesus Christ to which the Bible bears witness cannot be fully comprehended in any human statement. Yet the Holy Spirit makes God’s purpose of salvation sufficiently plain in the Old and New Testaments. The Unitas Fratrum recognizes the Word of the Cross to be the center of the Holy Scriptures and of evangelical preaching. Its main commission and its reason for existence is to witness unfailingly to these glad tidings. We pray our Lord for strength never to desist from doing so.15

In our next issue, we continue with the Synod of 1957, the Ground of the Unity and our conclusion.

1 See J. Kenneth Pfohl, Memorabilia of Salem Congregation, 1931-1961 (Winston-Salem: Moravian Archives, 1993), p. 414.
2 For a general description of this Synod’s proceedings and decisions, see Hamilton, History, pp. 343-345.
3  Minutes of the 1957 General Synod, Resolutions 5 and 6, p. 84. Mimeographed copy in the Moravian Archives, Winston-Salem, North Carolina.
4 1957 Minutes, Resolutions 7 and 8, pp. 84-85. See also failed motion on p. 86.
5 Wednesday, September 4, 1957.
6 “The Ground of the Unity,” Moravian Messenger (British Province), December, 1957, p. 3. In this light, a comparison of “The Ground of the Unity” with the “Declaration of Barmen” (1934), in which some German Protestants affirmed loyalty to God over loyalty to human government, as the Nazis demanded, would be valuable.
7 p. 1. Typescript (mimeographed) in the Moravian Archives, Winston-Salem, North Carolina. Bishop Hamilton in his History, p. 344, says surprisingly little about “The Ground of the Unity” and does not refer to it by name. Hamilton’s “Explanation” says the last major doctrinal change was in 1889. This must be a typographical error (repeated later), for in his History (p. 321), he says that 1889 left the doctrinal section “essentially unchanged,” but does note that changes were made in 1879 (p. 319). The version in the History is in accord with the 1889 Results, and in its Resolutions (p. 2) that Synod “confesses anew” the doctrinal chapter as it stood. Note, however, in regard to the statement in History, p. 319, it was 1857 which actually added the “sixth point,” and 1879 added the “seventh” and “eighth.”
8 “Explanation,” p. 1.
9 The British Moravian Archives has kindly furnished a photocopy of the working copy with changes written in by A. J. Lewis, secretary of the doctrinal committee.
10 1957 Minutes, pp. 61-67.
11“Explanation,” pp. 1, 8. The 1957 minutes themselves (p. 67) note only that after the adoption of its sections, the whole first partial report of the doctrinal committee “as amended” was adopted. The minutes give final results, not what the precise amendment was.
12 Moravian Messenger, December, 1957, p. 3.
13 These are his words. The 1957 minutes themselves, p. 67, are less effusive: “. . .the Unity Synod recommends to the Provincial Boards that the document ‘The Ground of the Unity’ shall be communicated to all congregations, especially by the ministers concerned, that it might be carefully considered by every member of the Unity. Carried 28-3.”
14 “Explanation,” p. 1.
15 Church Order of the Unitas Fratrum, Bethlehem, Pa., 1957, Part I, ¶4, pp. 11-12.