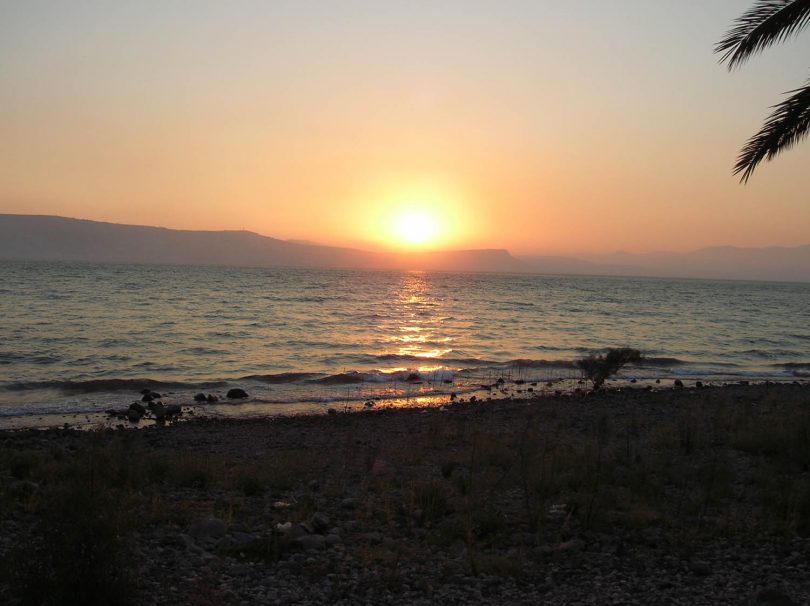 As part of our Create in Me series, we share a hymn from Sing to the Lord a New Song A New Moravian Songbook written by Lahoma Gray. Her son, Sam Gray, shares the story behind the song, while the Rev. Brian Dixon of Lake Auburn Moravian Church offers ideas on how to use it in worship.

In 1985, Lahoma Gray had the opportunity to visit the Holy Land. This was her first journey to Israel and she went with a group (many of whom were her friends) and a tour guide. She loved being able to see the significant places in Jesus’ life and being able to “walk where he walked.”

But there was one place and one experience that touched her more deeply than any of the other places and experiences. It was the Sea of Galilee. She found time, late one afternoon, to sit alone, in silence, by the sea. She said that the place was meaningful to her because it was a place of encounter – a place where people were called into a relationship with the Savior – a place where life-changing decisions were made.

Lahoma had written many poems and reflections about experiences in many places: Nicaragua, Honduras, Sierra Leone and the United States. But she had never composed a tune for any of those texts. So it surprised her, she says, when she realized she was singing the words about this experience to a tune that had never been sung before. She sang about being “by Galilee” and meeting the Savior, hearing him call, feeling his presence, hearing him whisper, feeling him touching her heart and standing beside her, making a promise to him – a vow – and being drawn to him. It was the highlight of her Holy Land journey.

When she returned to the U.S., she sang the song for her sons, Sam and Steve, and asked them to transcribe the melody and add harmonization and chords for guitar and piano. No changes were made to the original tune or text that had formed in her heart and mind that evening by Galilee.

Note: When Lahoma began to suffer the effects of dementia, the song seemed to be even more meaningful for her. Her children would sing it for her and they could see her almost being transported through time and space to that place by Galilee.
—Sam Gray

Using “By Galilee” in worship

Many people feel that music has a special ability to “take you there.” It can touch our deepest, most powerful memories, and give shape to our feelings about the future. I believe that, through music, all the sight and sound, taste and touch of life can be shared. This is especially significant when we gather for worship, and one reason I think that music plays such an important role in the faith we sing and play. It takes us there: from beginning, “Crashing waters at creation,” to end, “Jerusalem the golden, descending from above,” and it prepares us all along the way to live more deeply in the Way.

Lahoma Gray’s hymn, “By Galilee,” has become one of my favorites. It moves me, lifts me, brings me along with her into that experience of rest and reflection while sitting by the sea. In considering the use of this hymn for worship, it may help to note that it is a personal testimony. “I met the Savior… I heard him call… I felt his presence,” and “I’ll never be same again.”

You will find there are hymns emphasizing the community of which we are a part: “When simplicity we cherish,” and there are also hymns like “By Galilee” that invite each one of us to more personal considerations:

Where have I met Jesus and heard his call?

Where have I felt Christ’s presence?

In what ways has this changed my life?

In addition to encouraging worshipers to reflect on such questions personally, it should not be lost on us that Sister Lahoma made the decision to bear public witness to this personal experience—to make a wonderful gift of it to us. What would it look like to create space in our worship for following this brave example? Here are a couple ideas:

Sing one verse at a time and have someone different prepared to speak for a few moments in between each verse. 3-5 minutes would be ideal. Each of the three speakers could take a different verse as a prompt for their comments.

Sing the first two verses and ask the accompanist to continue playing while worshipers are invited to write a “thank you” to Jesus for some particular encouragement, or a pledge of commitment to some needed change. Then, as the third verse and refrain are resumed, have people bring their notes forward, placing them in a large cup at the front of the sanctuary. If the notes do not all fit neatly inside the cup, but end up overfilling it and spilling out onto the table, that would be alright!
—Brian Dixon

Email us at [email protected] with ideas, hymns, suggestions and thoughts on worship! Let’s continue the conversation and share with one another. We look forward to hearing from you and sharing the creativity alive and well in today’s Moravian Church!

From the New Revised Standard Version of the Bible, © 1989 by the Division of Christian Education of the National Council of Churches of Christ in the USA.
Used by permission