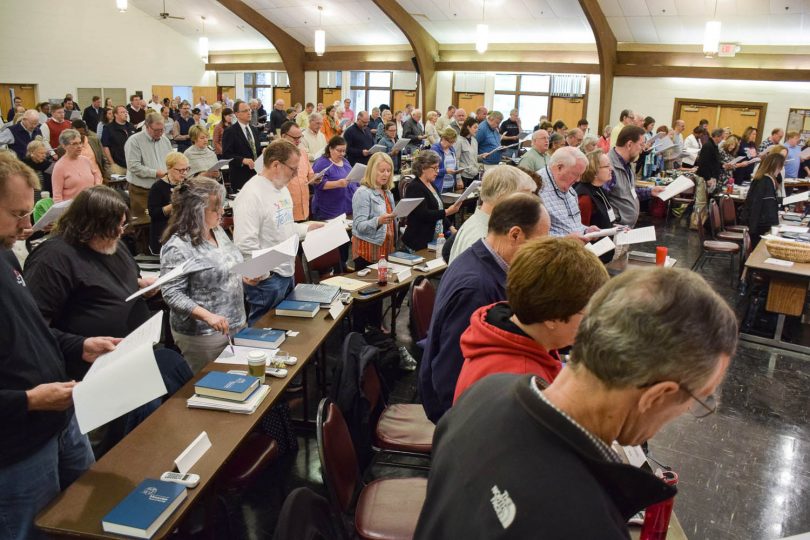 When church members think of what the church is, they tend to center on the local church. While this is certainly true for Moravians as well, they really have something unusual in their worldwide Unity. This is a closely-knit federation of more than 20 provinces on four continents. Every seven years a Unity synod is convened with three delegates from each of the established provinces and one delegate each from the so-called affiliated provinces: those not yet completely self-supporting.

Worship, study, fellowship, and committee work comprise the agenda along with legislative sessions. Individual provinces agree to be bound by the synodal decisions, and sessions last about two weeks. A typical assortment of issues discussed would be:

* Recognition of new provinces, some in process of development, and some moving from affiliated to fully indigenous status

* Concern for justice, peace, the integrity of creation – all in the context of differing political and economic systems.

* Theological education and how the church can better respond to theological and political developments in its provinces.

* So-called “Unity Undertakings,” where joint support is given to projects outside the provinces, through offerings of the congregations.

* Matters related to confirmation, Holy Communion, and the orders of the ministry.

Between synods a Unity Board functions as the executive body, mostly by correspondence. This includes a representative from the provincial board of each province; and the presidency rotates. From time to time Unity conferences may be called; and the Unity Board meets at least twice between synods depending on available finances.

No matter what legislation comes out of Unity synods, strong international fellowship results, and better understanding of mutual problems. The sessions also lead to new, assisting relationships such as the ones the American provinces have had to Alaska, Labrador, Guyana, Nicaragua, Honduras, the Eastern West Indies, and Western Tanzania. 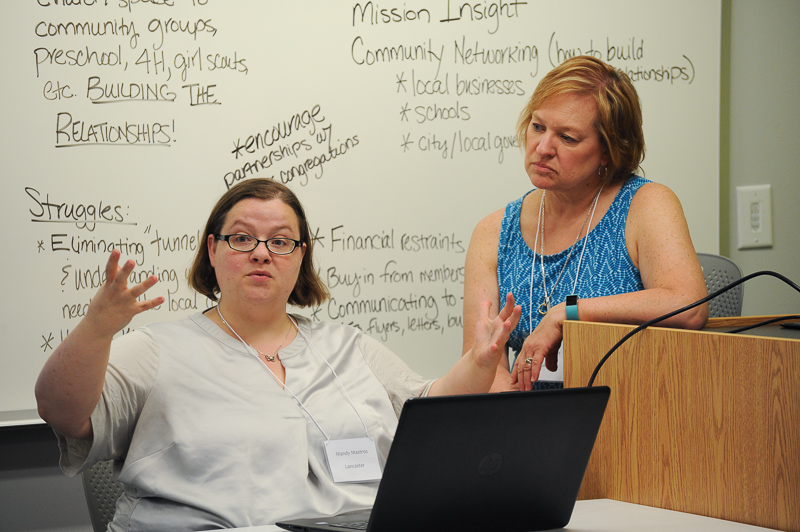 The Rev. Mandy Mastros and Cindy Miller discuss edits to a Synod proposal.

The Northern and Southern Provinces are self-governing under the Unity Synod. They function in essentially identical fashion and meet in legislative sessions (synods) every four years. Also, the North has three districts, each of which has a synod and district conference every four years. The district synods are usually convened halfway through the provincial synod cycle. They elect their executive boards (lay and clergy), along with other district officials. District conferences (non-legislative) occur at the call of the district executive boards.

And what is the work of a provincial synod? It elects its executive board (the Provincial Elders’ Conference, lay and clergy members) and bishops. It gives oversight and direction to all provincial agencies and institutions and elects their boards, examining also the financial status of each. It gives direction for church publication needs, plans for the church’s witness in the years ahead, and hears any complaints or grievances of congregations or individual members.

Most synods fashion programs for the intersynodal years, some of them financial, others for church growth, youth work, camping, or social action. Considerable confidence in the Lord’s leading is attached to the synod election of provincial elders and bishops, without nomination or campaign speeches.

A chart of provincial boards and service agencies in the Northern Province would look much the same in the South. Both provinces take Christian education in the local church very seriously. Boards and commissions work with the Sunday schools and Vacation Bible schools all year long. Each province also operates one or more camps and one or more retirement communities. A monthly magazine, The Moravian, serves both provinces and is delivered to every Moravian home as a privilege of membership.