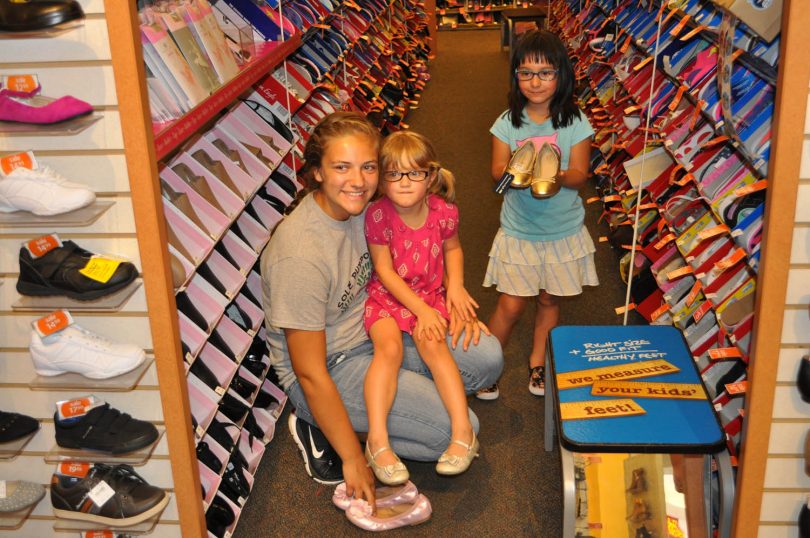 As a new school year approaches, so does the need to buy new clothes, supplies and shoes. However, many families are unable to afford new shoes for the start of classes each year.

For more than 700 kindergartners through fifth-graders, new school shoes became a reality, thanks to a program developed at Dover First Moravian Church in Dover, Ohio. These students each received $20 vouchers to assist in buying new shoes before school starts, all purchased and donated by Dover First’s “Sole Purpose.”

For the past five years, Sole Purpose has been dedicated to putting shoes on the feet of people in need. The ministry raises funds to provide vouchers for children so they can pick the shoes they want – an experience that some children do not get every year or even at all. Since its founding, Sole Purpose has expanded to serving a range of 12 different school districts in Tuscarawas County.

A group of six high school students from Dover started the program when they realized that many people did not have a decent pair of shoes, while they had old unused shoes sitting around in a closet. This spark drove them to form Sole Purpose, the only service in the county that strives to put shoes on children’s feet.

During its first two years, Sole Purpose organized fundraisers to raise money to buy new shoes for children, but wanted to find a more effective way to distribute shoes to a large number of children. Therefore, in its third year, Sole Purpose decided to partner with Dress-a-Child and Payless Shoes to provide shoes to a greater number of children, taking over from another organization that had stopped years ago.

When first partnering with Dress-a-Child, Sole Purpose started with just Dover students to make sure a good process was in place and that they had the funds to meet their needs. In that first year, Sole Purpose provided 95 shoe vouchers to Dover students in grades K-5.

Based on this success, the Sole Purpose team decided to expand their network to Dover and New Philadelphia school districts. That year Sole Purpose raised enough money to hand out 283 vouchers to students, nearly tripling the number of students they reached from the previous year. In 2016, Sole Purpose expanded even further to the Twin City area; Last July, Sole Purpose ultimately handed out 714 vouchers across 12 different school districts totaling $14,280 which is much more than was expected.

Sole Purpose has grown throughout the five years. It has gone from serving one school district to serving twelve districts with the ultimate goal of expanding to serve all children in grades K-5 in Tuscarawas County. Sole Purpose is definitely having an impact on children and families in need through the unduplicated service of shoe giving. This unique project’s influence resonates throughout the county, and is continuously growing to help as many in need as possible.

Zach Wilson is a member of the First Moravian Church of Dover, Ohio.

From the September/October 2016 Moravian Magazine