It could have been a bright Sunday afternoon at any Moravian Church around the world. Young and old were streaming into the educational building. Men in comfortable clothes. Women in brightly colored attire. Nearly 60 in all. Smiling and chatting.

However, this Sunday afternoon they were arriving at a mosque, the Annoor Islamic Center in Clemmons, N.C., a few miles west of Winston-Salem for an opportunity to share their faith and their beliefs—Moravians and Muslims.

A few months earlier, the tenor had been radically different. At a meeting a few miles away, a group—mostly Christians—expressed their fear of Muslims and made threats to the city’s three mosques. A newspaper reporter wrote that one man recommended that the best way to respond to Islam was to kill all Muslims. He said that it was time to “shed some blood,” that he was ready to “start taking people out.”

Local Muslims were startled to see the serious consequences of Islamophobia in their own community. They also recognized that they needed to tell their own story, not leave it to strident voices that twisted their message.

With the assistance of Interfaith Winston-Salem, the three local mosques opened their doors to the community at their next Friday afternoon prayer services. Several hundred people accepted the invitation, many of them entering a mosque for the first time.

Knowing that a single Open House event was not enough to make a difference, leaders of the three mosques invited their members to make themselves available to meet with groups across the county. Twenty-five Muslim men and women stepped forward.

Truman Dunn, a retired Moravian minister and leader in Interfaith Winston-Salem, worked with them to organize a small steering committee. The group decided to approach local faith communities about arranging meetings between their members and leaders in the Muslim community. The Moravians were first to respond.

David Guthrie, president of the Provincial Elders Conference in the Southern Province of the Moravian Church, supported the idea and encouraged Dunn to meet with Donna Hurt, president of the province’s Mission Society.

Hurt was also receptive to the idea, and she and Dunn formed a planning committee of Moravians and Muslims. Their concept was to invite local church members to a session with local Muslims that included a short presentation followed by small group conversations. The result was the August 27 meeting at the Annoor Islamic Center with 20 Moravians from 10 churches and 37 Muslims from Annoor and other mosques participating.

“What a joy it was to have Muslims and Moravians on a planning team for the event.” Dunn said. “We met three times and each time we met there was clearly growing friendship, warmth, sharing personal stories and laughter. We were no longer Muslims and Christians. We were just fellow human beings.” 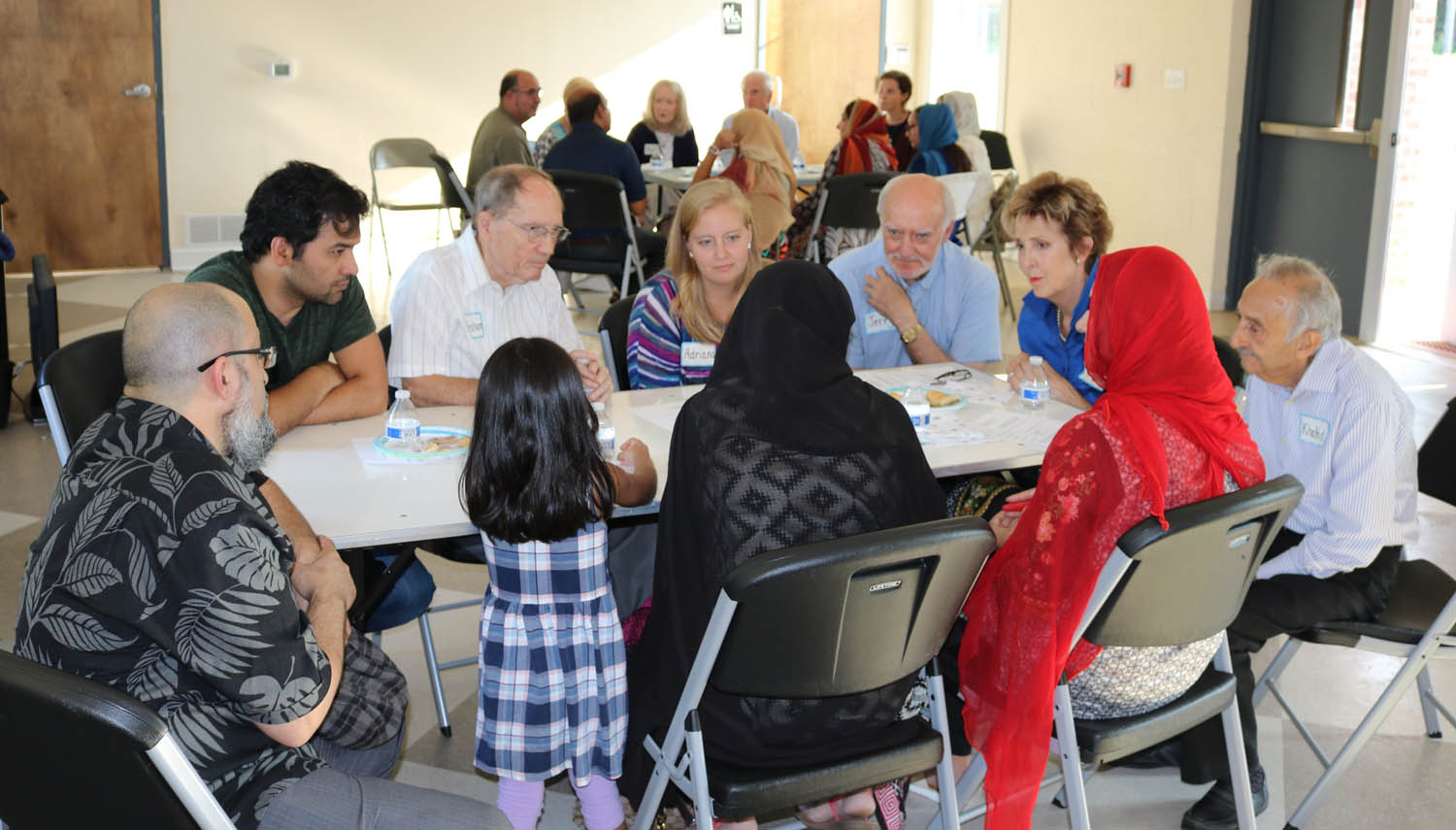 Dr. Mustafa Siddiqui, a member of the planning committee, developed a slide presentation on Islam that “was like pouring a river into a pot. There is just too much to include,” he said. The presentation covered questions that many non-Muslims have, including what Muslims believe about Jesus, why Muslims pray five times a day, women’s dress and other topics.

Most of the Moravians who attended the meeting said that they found the presentation informative. Many also said that it was the first time they had had an opportunity to spend time in a meaningful conversation with a Muslim.

“I had studied Islam while in college, so while this was not ‘new,’ it was from Muslims and not from a white, Anglo-Saxon Protestant,” said Peggy C. Carter of Fries Memorial Moravian Church.

Donna Hurt said after the meeting, “I understand now what Muslims believe about Jesus, and feel more informed about the women’s dress code, Islamic prayer times and the role of an Imam.”

“I came away with a broader understanding of how our Muslim neighbors are well-assimilated across our community,” John D. Rights of Konnoak Hills Moravian Church said.

Dunn added that many who attended said as they were leaving that it was a “wonderful experience and that they couldn’t wait to get together again and continue the conversation.”

One participant has already discussed with her pastor the idea of bringing a similar gathering to their church. Another said that “realizing we are a sound bite society, this is not a sound bite topic. I’d lengthen the time to enrich the experience.”

Dr. Hamdy Radwan, president of Annoor Islamic Center, said more of the meetings are needed. “For sure, I will participate,” he said. “Not only do we want Christians to know about Islam, we want to get to know each other as people.”

Jerry McLeese is the founder and current chairperson of Interfaith Winston-Salem, a nonprofit working to building bridges of understanding in this North Carolina community. In photo above: Participants gathered around small tables to share information about themselves and talk with their Muslim hosts at an Interfaith Winston-Salem event.

From Issue 7 of the 2017 Moravian Magazine

Jacob said, “Come, let us go up to Bethel, that I may make an altar there to the God who answered me in the day of my distress and has been with me wherever I have gone.” Genesis 35:3

Give thanks to God the Father at all times and for everything. Ephesians 5:20

Heavenly Creator, we thank you for your faithfulness. You have blessed us richly in ways which are seen and unseen. Thank you for your presence in our lives, through your Holy Spirit. Amen.