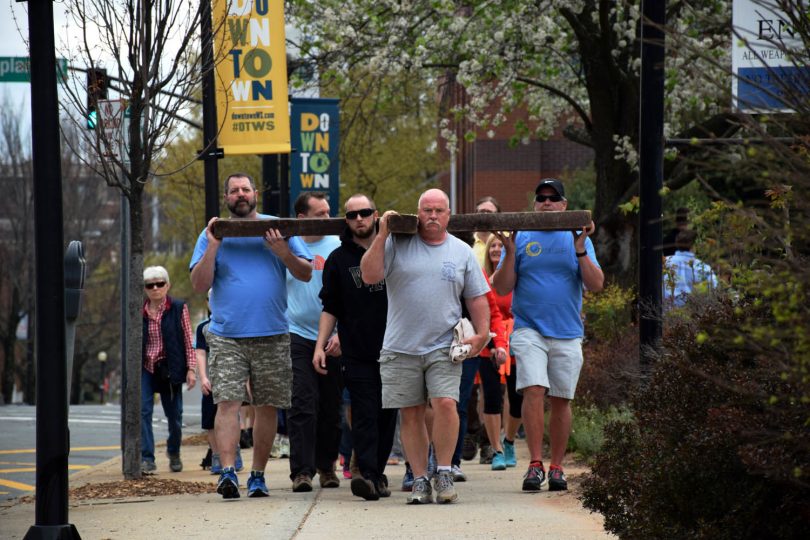 Forty-two years ago, several weeks before Holy Week, Trinity’s young associate Pastor, Phil Bauguess, sat down on the floor with the youth fellowship. “Hey gang! I have an idea!” (This was not always a good thing.) He continued. “We’re gonna build a 200 lb. cross and carry it through downtown Winston-Salem to Old Salem.” Honestly, we looked at him like he’d lost his mind.

But as he shared his vision—a silent pilgrimage, figuratively and literally carrying Jesus’ cross—the Spirit captured our enthusiasm as well.

That first CrossWalk was very different from today. We started at the old Sears building to the beat of a single drum, silently walking the streets of our city. There were only about 25 or so of us, and a couple of our parents, but we took turns in groups of five and six carrying the heavy cross. Pastor Phil started us off by reading Mark 15:21. “They compelled a passer-by, who was coming in from the country, to carry his cross; it was Simon of Cyrene, the father of Alexander and Rufus.”

As we struggled with the heavy wooden cross and contemplated Jesus’ walk, we were asked to think about Jesus’ walk to Golgotha. He had only one man “compelled” to help him; we had an entire group and could switch with someone when we were tired. As we passed a billiard parlor and several seedy bars, patrons ran out and yelled, “It’s the Klan!” We were humiliated. Some people stopped and gawked. Others bowed in prayer. And others, like the first, yelled at us. At each block, each street corner, we wondered what was coming next. It was only a little over a mile to Old Salem, but as the walk progressed we became hotter and thirstier and exhausted. Lessons learned – in a very significant way.

That first year, and for several years after, we ended the walk at the Old Salem Arboretum. There were a few prayers, some reflections and the reading of the account of Jesus’ crucifixion. One common observation was that we got to put the cross down and head on home. When Christ put it down, he was raised up on it, to die – for us.

Four decades have passed and the youth at Trinity continue this powerful and meaningful tradition. Today, we meet near where we serve at the Overflow Homeless Shelter. Many youth groups, friends, family and tourists visiting for the Sunrise Service join us. And this year, instead of 25 scared kids and their parents, more than 260 people took part in the walk.

It is still a silent, contemplative walk. There are still curious stares and occasional taunts. Participants still get hotter, thirstier and more tired as they walk. But it is still an amazing and stunning experience. The cross is still heavy. And we are still compelled to show up and help Jesus carry it.

Each youth group at Trinity has put their own mark on the CrossWalk. Now, we end at Salem Square, with Trinity’s Brass Choir (and some friends) playing our Holy Week chorales. Those who are unable to walk wait in prayer at the square, lifting up the walkers and contemplating Jesus’ journey. The walkers fittingly sojourn through God’s Acre and then down Church St. to the waiting band and congregation. There, a worship service concludes the walk. This year more than 300 gathered for worship led by Pastor John Jackman. And it was fitting that Pastor Phil Bauguess participated in the worship this year, along with many in that original gang.

And as we walk away, the same idea resonates. As we reflect on that miraculous place where joy and sorrow meet, we put the cross down to go our separate ways. Christ put it down only to be raised up on it – for us. “He has redeemed us by His blood and made us kings and priests to God; for us, for us, the Lamb was slain; Praise ye the Lord, Amen!”

From the June 2016 Moravian Magazine 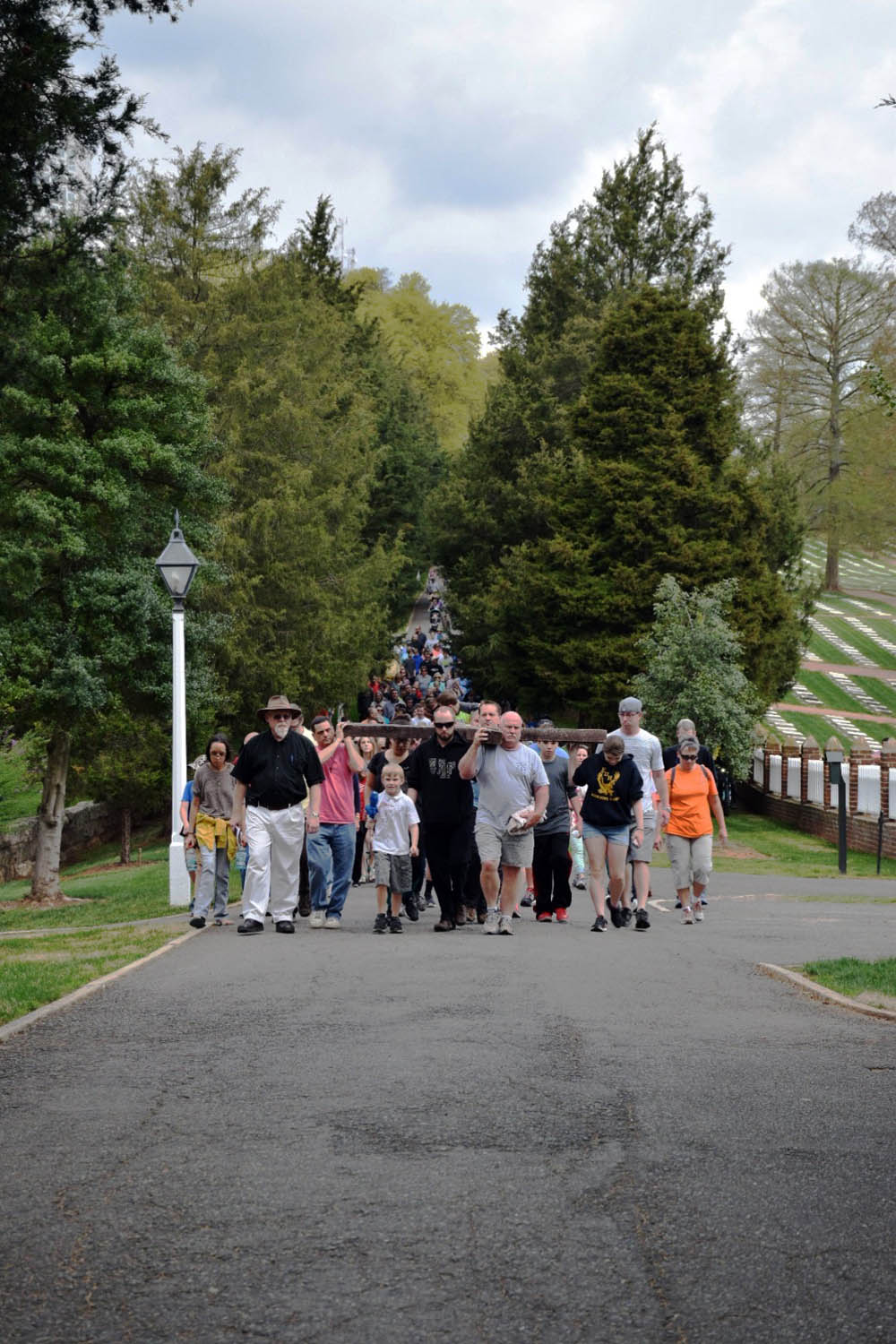