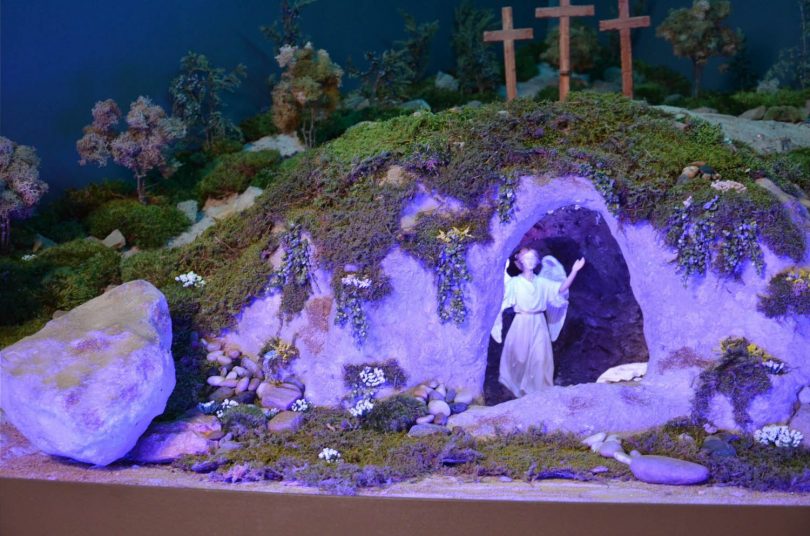 This odd idea came up when the Nativity Committee was assembling the new Nativity in late December for the first time and the committee’s artist, Jan Bullins, made the scene into a work of art. Those who saw it began to lament that it would only be up a short while and someone threw out the idea of keeping it up and transforming it into an Easter Putz. Others then made joking remarks about transforming it for other holidays throughout the year as well and the idea was forgotten for awhile.

However, as the Christmas season progressed, the idea kept popping up and it began to be discussed in a more serious way until by the time came to take the scene down, the talk of converting it into one depicting the events of Easter had become serious. After some discussion, and Pastor Lane Sapp’s blessing, the Committee hid the scene by covering the front with a curtain and made plans on how to transform the scene into an Easter Putz.

At first, the thought of converting a Christmas scene that celebrates the joy of Christ’s birth into one that depicts the difficult events of Easter seemed odd, but the basics of the conversion were fairly simple. The whole scene was a hillside with the manger scene as a cave opening in the center. With the Nativity figures removed and a rocky opening with a stone to cover the cave entrance, the stage was set for the Easter scene. Handmade crosses were placed on the top of the hillside and a stone-like platform with cloths draped over it were placed in the tomb, marking the place where Jesus had lain.

This transformation now takes place each year as a traditional part of Calvary’s Easter celebration and is anticipated by everyone. The scene is revealed on Palm Sunday and left up throughout Holy Week, when, on Easter Sunday, the stone is rolled back showing an empty tomb with the Angel inside telling those who come that “The Lord is risen”!

From the March 2017 Moravian Magazine

Jacob said, “Come, let us go up to Bethel, that I may make an altar there to the God who answered me in the day of my distress and has been with me wherever I have gone.” Genesis 35:3

Give thanks to God the Father at all times and for everything. Ephesians 5:20

Heavenly Creator, we thank you for your faithfulness. You have blessed us richly in ways which are seen and unseen. Thank you for your presence in our lives, through your Holy Spirit. Amen.