A U.S. flag hangs from a storm-ravaged home in Moore, Okla., May 21, 2013, one day after an EF5 tornado with winds exceeding 200 miles per hour tore through the Oklahoma City suburb. U.S. Service members assisted in disaster response efforts in the aftermath of the tornado, which killed 24 people, injured more than 200 and displaced thousands. (U.S. Air Force photo by Maj. Jon Quinlan/Released) 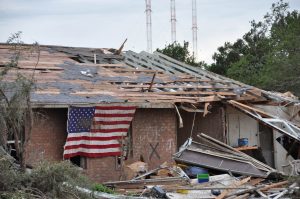