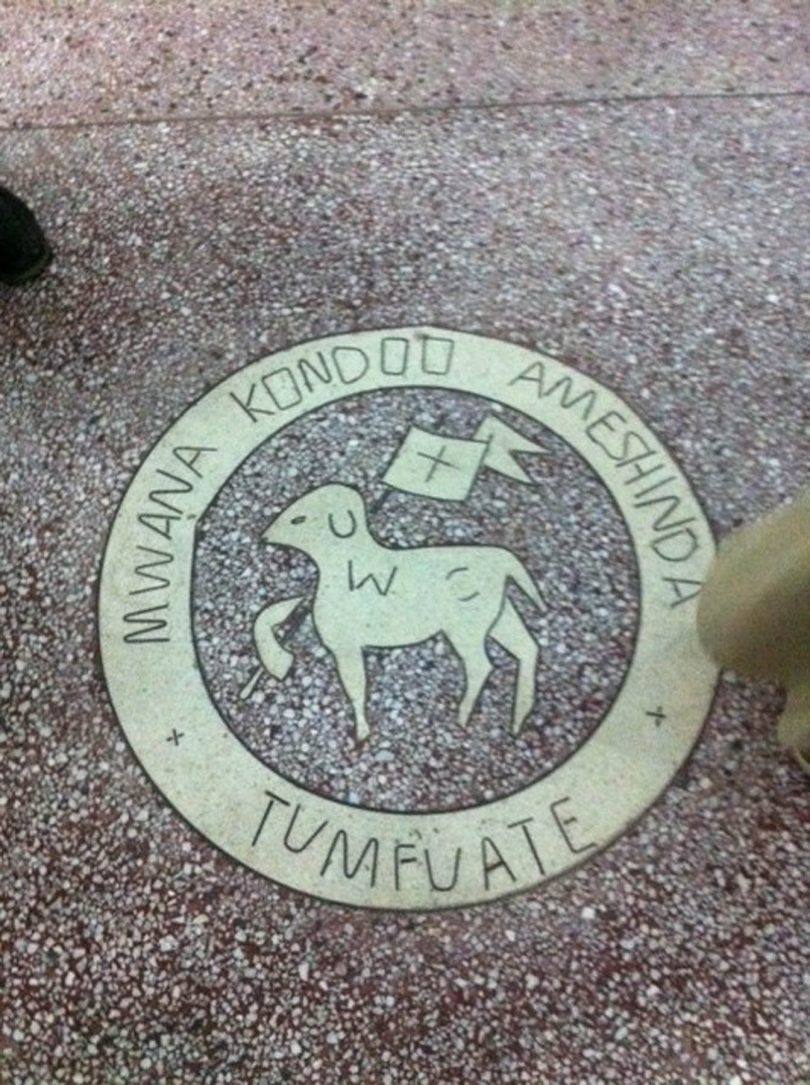 The Northern and Southern Provinces of the Moravian Church are a small but very important part of a larger whole – the Unitas Fratrum, a worldwide church whose roots trace back to the mid 1400s.  One of the central underpinnings of this worldwide church is the Ground of the Unity, a doctrinal statement that was adopted by the Unity Synod of the Unitas Fratrum in 1995.

This document is a revision of a similar statement prepared and approved by the Unity Synod of 1957, which marked the 500th anniversary of the founding of the Unitas Fratrum, and reviewed by subsequent Unity Synods. The material contained in the 1957 statement and in this 1995 version of The Ground of the Unity is based on earlier statements about the beliefs and practices of the Moravian Church.

The Ground of the Unity

A doctrinal statement adopted by
the Unity Synod of the Unitas Fratrum, or Moravian Church,
held at Dar es Salaam, Tanzania, August 13 to 25, 1995

The Lord Jesus Christ calls His Church into being so that it may serve Him on earth until He comes. The Unitas Fratrum is, therefore, aware of its being called in faith to serve humanity by proclaiming the Gospel of Jesus Christ. It recognizes this call to be the source of its being and the inspiration of its service. As is the source, so is the aim and end of its being based upon the will of its Lord.

The Belief of the Church

With the whole of Christendom we share faith in God the Father, the Son, and the Holy Spirit. We believe and confess that God has revealed Himself once and for all in His Son Jesus Christ; that our Lord has redeemed us with the whole of humanity by His death and His resurrection; and that there is no salvation apart from Him. We believe that He is present with us in the Word and the Sacrament; that He directs and unites us through His Spirit and thus forms us into a Church. We hear Him summoning us to follow Him, and pray Him to use us in His service. He joins us together mutually, so that knowing ourselves to be members of His body we become willing to serve each other.

In the light of divine grace, we recognize ourselves to be a Church of sinners. We require forgiveness daily, and live only through the mercy of God in Christ Jesus our Lord. He redeems us from our isolation and unites us into a living Church of Jesus Christ.

The belief of the Church is effected and preserved through the testimony of Jesus Christ and through the work of the Holy Spirit. This testimony calls each individual personally, and leads him/her to the recognition of sin and to the acceptance of the redemption achieved by Christ. In fellowship with Him the love of Christ becomes more and more the power of the new life, power which penetrates and shapes the entire person. As God’s Spirit so effects living belief in the hearts of individuals, He grants them the privilege to share in the fruits of Christ’s salvation and membership in His body.

The Triune God as revealed in the Holy Scripture of the Old and New Testaments is the only source of our life and salvation; and this I Scripture is the sole standard of the doctrine and faith of the Unitas Fratrum and therefore shapes our life.

The Unitas Fratrum recognizes the Word of the Cross as the centre of Holy Scripture and of all preaching of the Gospel and it sees its primary mission, and its reason for being, to consist in bearing witness to this joyful message. We ask our Lord for power never to stray from this.

The Unitas Fratrum takes part in the continual search for sound doctrine. In interpreting Scripture and in the communication of doctrine in the Church, we look to two millennia of ecumenical Christian tradition and the wisdom of our Moravian forebears in the faith to guide us as we pray for fuller understanding and ever clearer proclamation of the Gospel of Jesus Christ. But just as the Holy Scripture does not contain any doctrinal system, so the Unitas Fratrum also has not developed any of its own because it knows that the mystery of Jesus Christ which is attested to in the Bible, cannot be comprehended completely by any human mind or expressed completely in any human statement. Also it is true that through the Holy Spirit the recognition of God’s will for salvation in the Bible is revealed completely and clearly,

The Unitas Fratrum recognizes in the creeds of the Church the thankful acclaim of the Body of Christ. These creeds aid the Church in j formulating a Scriptural confession, in marking the boundary of heresies, and in exhorting believers to an obedient and fearless testimony in every age. The Unitas Fratrum maintains that all creeds formulated by the Christian Church stand in need of constant testing in the light of the Holy Scriptures. It acknowledges as such true professions of faith the early Christian witness: “Jesus Christ is Lord!” and also especially the ancient Christian creeds and the fundamental creeds of the Reformation.

(Note: In the various Provinces of the Renewed Unitas Fratrum the following creeds in particular gained special importance, because in them the main doctrines of the Christian faith find clear and simple expression:

The Unitas Fratrum as a Unity

We believe in and confess the Unity of the Church given in the one Lord Jesus Christ as God and Saviour. He died that He might unite the scattered children of God. As the living Lord and Shepherd, He is leading His flock toward such unity.

The Unitas Fratrum espoused such unity when it took over the name of the Old Bohemian Brethren’s Church, ‘Unitas Fratrum’ (Unity of Brethren). Nor can we ever forget the powerful unifying experience granted by the crucified and risen Lord to our forebears in Herrnhut on the occasion of the Holy Communion of August 13, 1727, in Berthelsdorf.

It is the Lord’s will that Christendom should give evidence of and seek unity in Him with zeal and love. In our own midst we see how such unity has been promised us and laid upon us as a charge. We recognise that through the grace of Christ the different churches have received many gifts. It is our desire that we may learn from each other and rejoice together in the riches of the love of Christ and the manifold wisdom of God.

We confess our share in the guilt which is manifest in the severed and divided state of Christendom. By means of such divisions we ourselves hinder the message and power of the Gospel. We recognize the danger of self-righteousness and judging others without love.

Since we together with all Christendom are pilgrims on the way to meet our coming Lord, we welcome every step that brings us nearer the goal of unity in Him. He Himself invites us to communion in His supper. Through it He leads the Church toward that union which He has promised. By means of His presence in the Holy Communion He makes our unity in Him evident and certain even today.

The Church as a Fellowship

The Church of Jesus Christ, despite all the distinctions between male and female, poor and rich and people of different ethnic origin, is one in the Lord. The Unitas Fratrum recognizes no distinction between those who are one in the Lord Jesus. We are called to testify that God in Jesus Christ brings His people out of every ethnic origin and language into one body, pardons sinners beneath the Cross and brings them together. We oppose any discrimination in our midst because of ethnic origin, sex or social standing, and we regard it as a commandment of the Lord to bear public witness to this and to demonstrate by word and deed that we are brothers and sisters in Christ.

The Church as a Community of Service

Jesus Christ came not to be served but to serve. From this, His Church receives its mission and its power for its service, to which each of its members is called. We believe that the Lord has called us particularly to mission service among the peoples of the world. In this, and in all other forms of service both at home and abroad, to which the Lord commits us, He expects us to confess Him and witness to His love in unselfish service.

Our Lord Jesus entered into this world’s misery to bear it and to overcome it. We seek to follow Him in serving His brothers and sisters. Like the love of Jesus, this service knows no bounds. Therefore we pray the Lord ever anew to point out to us the way to reach our neighbors, opening our hearts and hands to them in their need.

Jesus Christ maintains in love and faithfulness His commitment to this fallen world. Therefore we must remain concerned for this world. We may not withdraw from it through indifference, pride or fear. Together with the universal Christian Church, the Unitas Fratrum challenges humanity with the message of the love of God, striving to promote the peace of the world and seeking to attain what is best for all. For the sake of this world, the Unitas Fratrum hopes for and looks to the day when the victory of Christ will be manifest over sin and death and the new world will appear.

Jesus Christ is the one Lord and Head of His body, the Church. Because of this, the Church owes no allegiance to any authority whatsoever which opposes His dominion. The Unitas Fratrum treasures in its history the vital experience of the Headship of Christ of September 16, and November 13, 1741.

The Unitas Fratrum recognises that it is called into being and has been sustained hitherto only by the incomprehensible grace of God. Thanksgiving and praise for this grace remains the keynote of its life and ministry.

In this spirit it awaits the appearing of Jesus Christ, goes forward to meet its Lord with joy, and prays to be found ready when He comes.

Download a PDF version of the Ground of the Unity.