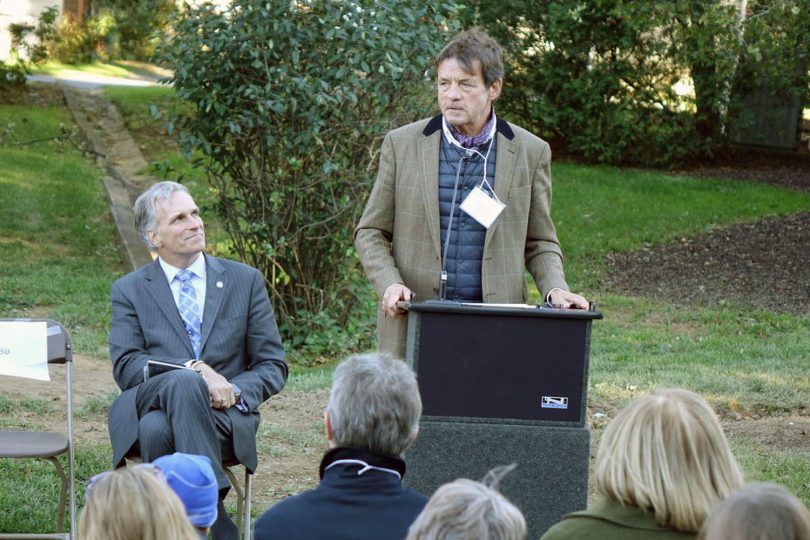 In the garden area behind the Moravian Theological Seminary in Bethlehem, Pennsylvania, a new linden tree is taking root.

Planted as part of the “Trees of Liberty” program, the tree was the first of 10 planted in the U.S. and one of many planted around the world to mark the 100th anniversary of the Czech Republic.

Moravian College President Bryon Grigsby was joined by Czech-American author and illustrator Peter Sís in planting the tree, while members of the American Friends of the Czech Republic, trustees from Moravian College and Seminary and others looked on.

“It is our pleasure and honor to be the first U.S. site to plant one of more than 1000 trees globally,” said President Grigsby. “As you can see by our statue of Comenius right out in front of our college, our history with the Czech Republic is noble and profound.”

Peter Sís, a Moravia-born, Caldecott Medal-winning children’s book author and illustrator serving as the American representative for the Tree of Liberty program, shared that his grandfather told him of planting trees in 1918 and of his own memories planting trees during the tumultuous period in 1968. “As we plant this tree, we hope for the future of a free and independent Czech Republic,” said Sís.

In 1918, when Czechoslovakia declared its independence from the Austro-Hungarian Empire, thousands of trees were planted in honor of the momentous occasion. During the past several years, a movement has been underway to locate and celebrate those trees as part of the Czech centennial.

As part of the ceremony, the Rev. Dr. Craig Atwood of Moravian Theological Seminary provided historical context highlighting the roots of the Moravian Church – and by extension, Moravian College – in the Czech village of Kunwald in the 15th century.

He told the story of the linden tree planted by those early members of the Unitas Fratrum, as a sign of hope that they would endure. The tree had three trunks, which the Brethren named “Faith,” “Love,” and “Hope.”  While the tree was struck by lightning nearly 50 years ago, it still stands today, and the wood from the damaged tree was used to carve a wooden chalice, which resides at the Seminary today.

Other Trees of Liberty in North America were planted in New York, Chicago, Atlanta, Minneapolis, Winnipeg and Pittsburgh.