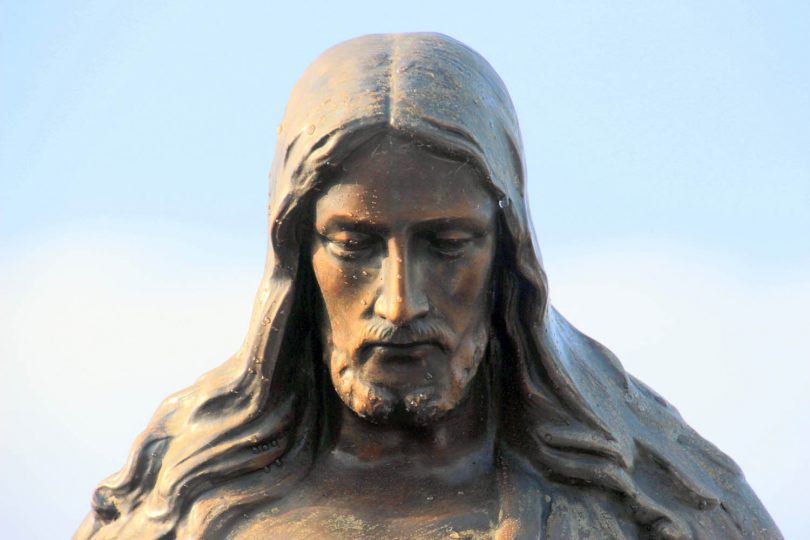 This month, we share writings based on John 18:32-37. This Bible text is for Reign of Christ/Christ the King Sunday in Lectionary Cycle B of the Revised Common Lectionary used by the Moravian Church.

32 (This was to fulfill what Jesus had said when he indicated the kind of death he was to die.) 33 Then Pilate entered the headquarters again, summoned Jesus, and asked him, “Are you the King of the Jews?” 34 Jesus answered, “Do you ask this on your own, or did others tell you about me?” 35 Pilate replied, “I am not a Jew, am I? Your own nation and the chief priests have handed you over to me. What have you done?” 36 Jesus answered, “My kingdom is not from this world. If my kingdom were from this world, my followers would be fighting to keep me from being handed over to the Jews. But as it is, my kingdom is not from here.” 37 Pilate asked him, “So you are a king?” Jesus answered, “You say that I am a king. For this I was born, and for this I came into the world, to testify to the truth. Everyone who belongs to the truth listens to my voice.”

Not from this World

“My kingdom is not from this world.” What on earth did Jesus mean by that statement to Pontius Pilate?

Does Jesus mean we should pay less attention to the news? Perhaps. But this is really about our understanding of God and God’s power. The kingdoms of the world—political, economic, social—are to some degree built on force, whether physical might, financial force, social pressure. “Not from this world” means that God’s kingdom is built on a different kind of power: not force but love, gentle persuasion, and our willing response to God.

Followers of Jesus, from the first century to the 21st century, have been tempted to live like the rest of the world. It is easier to imagine that God looks and acts like us. Jesus invites us, rather, to consider how we might look and act more like God.

The Gospel readings of the coming Sundays of Advent, which speak of John the Baptist and of the end of the world, remind us of the conflict between the ways of the world and the ways of God. And then comes the surprising act of God: we see the power of God in a power-less baby, and Moravians sing, “Not Jerusalem, lowly Bethlehem.”

My kingdom is not from here

On what we now celebrate as Palm Sunday, Pilate had entered the city on horseback, leading Roman cavalry and foot soldiers to reinforce the garrison permanently stationed at the Fortress Antonia.  (During the week of Passover, pilgrims could swell the population of Jerusalem from its usual 40,000 to over 200,000.)  This show of force was an important part of keeping order in this occupied land, especially during this volatile week when pilgrims celebrated Israel’s deliverance from slavery in Egypt.

Pilate’s procession had entered the city from its western side and was a display of power and domination. It was not just imperial power that was being displayed, but theological power as well. The emperor who ruled Rome was also considered to be the son of God.

Jesus of Nazareth, on that same day, had entered the city from the east, riding down the Mount of Olives on a donkey to the shouts of “Hosanna!”

Now in a poignant scene a few days later, as Jesus stands before Pontius Pilate, the Roman governor of ldumea, Judea, and Samaria, two kingdoms collide. One is a kingdom based on power and domination and self-interest, a kingdom where the rich and powerful rule and the poor have no voice. The second is the kingdom of heaven, the kingdom that Jesus proclaimed in word and deed throughout  his  ministry:  a  kingdom  where last is first, and where it is in giving that one finds; a kingdom where the master is servant, where swords are beaten into plowshares, where the blind see and the oppressed go free; a kingdom where no one is afraid.

So Jesus stands, as God always does, with those who have no voice. He stands in the truth of what love is and proclaims a kingdom that “is not from here.”

Which kingdom do I stand for? Be careful of your answer. It will cost you your life!

In his day Elvis Presley was the undisputed “king.” From the swivel of his hips to the way he combed his hair to the clothing he wore-even the sequined leather jumpsuits-there was no denying that Elvis was the king. It was who he was, how he lived, what he said, and how he treated others. All a person needed to do was stop, look, and listen.

Jesus presented many different opportunities to stop, look, listen, and recognize that he too was a king. Few in his own day were able to understand the kind of king that he was or the kind of power with which he would reign. In fact, of all of the people in the Passion story who fail to recognize Jesus’ kingship, the most surprising is Pontius Pilate. There is no doubt in my mind that by the time Pilate is done questioning Jesus he knows exactly who Jesus is. Pilate holds firm to what he has said and to what he believes-Jesus is the king of the Jews.

Jesus came to Earth to reveal himself as the Son of God and to demonstrate in word and deed that he was the king. Do we need to wait for him to come again to allow him to be lord and king of our lives? Hasn’t he done enough already?

This is the day to allow Jesus Christ to be the undisputed king of our lives-no hip swiveling or sequined leather jumpsuit necessary. Jesus has done his part to show us the power of his love and affection for us. It is now our time to commit our lives, our abilities, and our resources to our king, to follow him obediently, and to adore him with our thoughts, words, and actions.

This is not a day to patiently wait for our king. It is the day eagerly, joyously, and faithfully to serve him.

Jesus gets to the point. We learn a good deal about Jesus in today’s Gospel reading. He wastes no time in this brief exchange with Pontius Pilate.

Pilate—a representative of the Roman Empire, one of the world’s great governments, perhaps a first-century equivalent to the United States—is asking about things that he knows: power, titles, authority.

In Jesus, God appeals to us, not to submit to his power, but to become what he has created us to be, what we really are: God’s children and God’s coworkers for good.

Jesus tells Pilate the practical difference this makes for his followers: “If my kingdom were from this world, my followers would be fighting to keep me from being handed over.”

“Everyone who belongs to the truth listens to my voice.” Are we listening? Is the message of Jesus for us one of force or one of truth? Do we use force to accomplish what we consider the work of God? Do we attempt to speak the truth even in the face of the powers of the world?