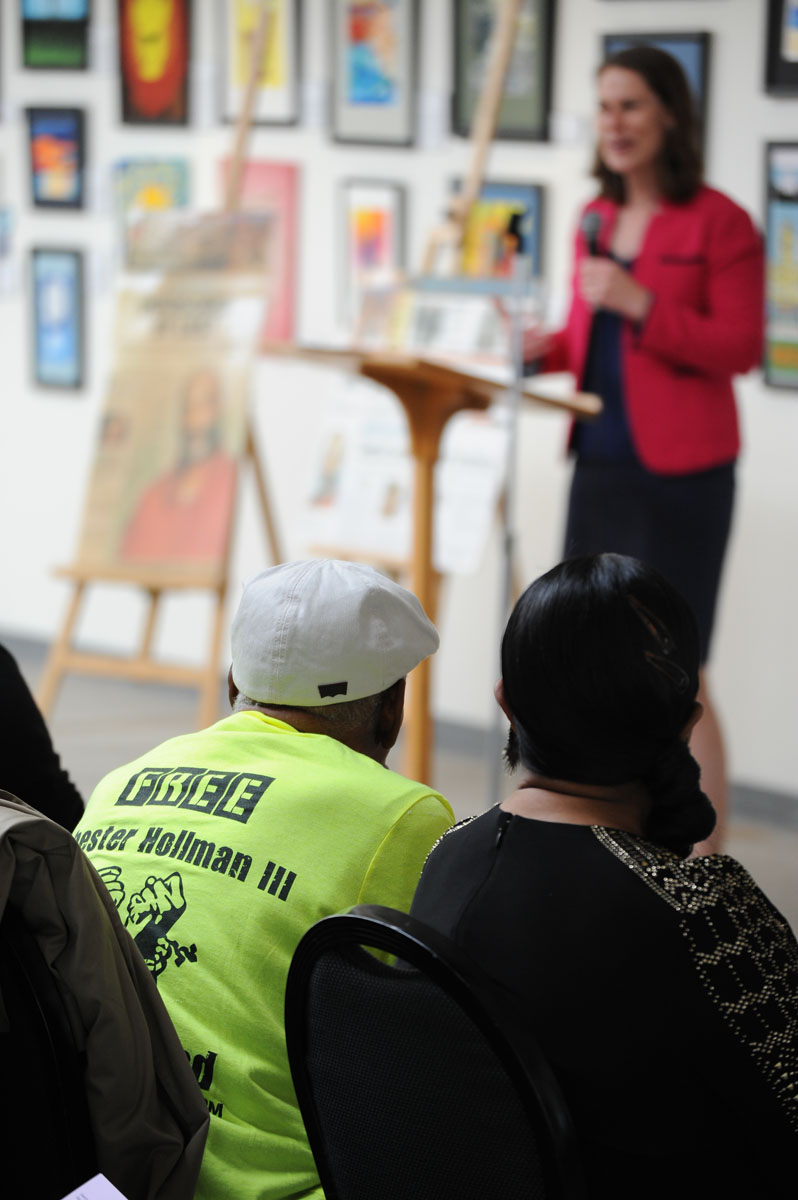 If you stepped into the recent art exhibit in Bethlehem’s Banana Factory Arts Center unaware of the background of the artists, you might have marveled at the variety and depth of the paintings. From the beauty of a still-life flower to the heartbreaking image of a homeless man to the smile of a young child, the art showed the breadth of human emotions and experiences.

Now realize that the art on display was painted by incarcerated individuals in Pennsylvania, and you are presented with images of hope and humanity that can connect us all, whether incarcerated or free. 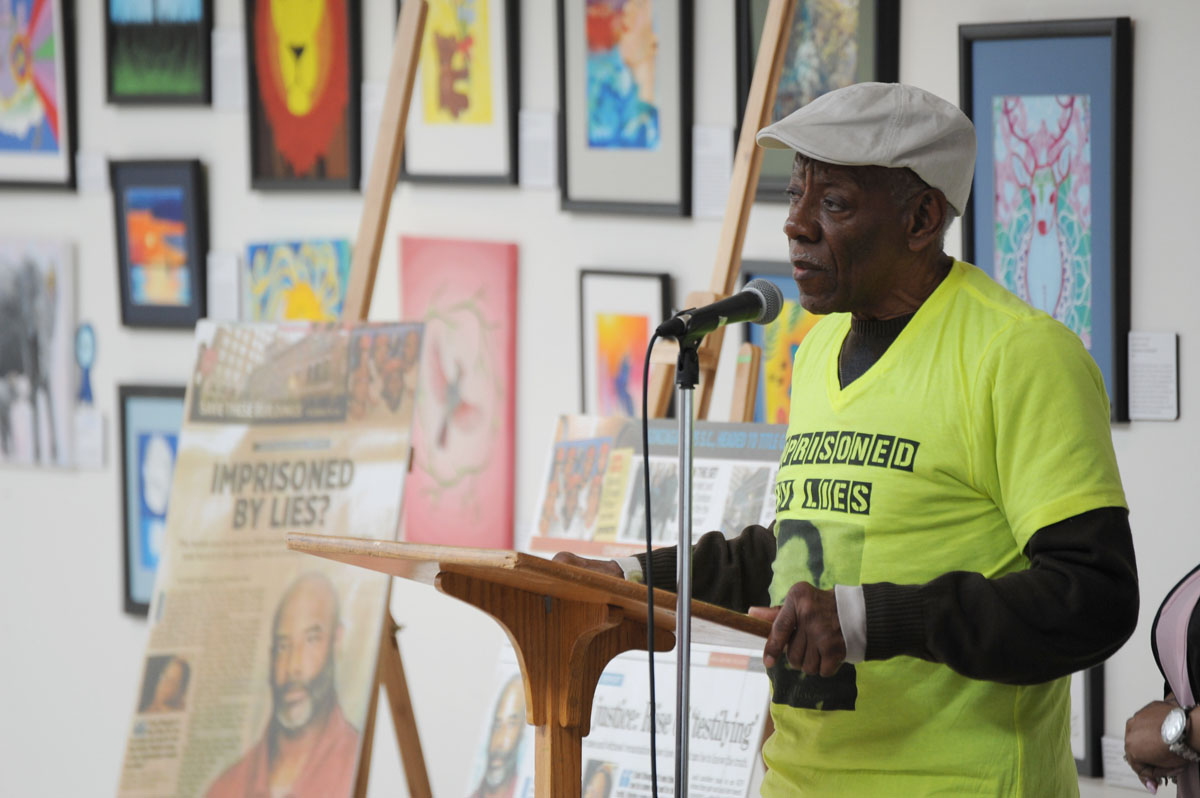 Two public events were also held in conjunction with the exhibit:  On March 24, “A Vigil for Hope in the Criminal Justice System” invited Chester Hollman Jr., joined by Deanna Hollman, to share the tragic injustice of his son, Chester Hollman III’s, wrongful conviction and sentence of life without parole in Pennsylvania.  Prayers and music accompanied these stories as the more than 50 people gathered remembered the humanity of the incarcerated, asking how God’s presence extends beyond the walls and bars of the prison.

Earlier on March 19, the Moravian Seminary sponsored and hosted Mr. Tyrone Werts, incarcerated for 37 years in Pennsylvania until his sentence of life without parole was commuted to life on parole by then Gov. Ed Rendell. Mr. Werts traced injustice and racial oppression leading to mass incarceration while also telling of his youth, the crime that occurred, and his conviction to second-degree murder. He then detailed his experiences while incarcerated – earning his BA from Villanova University and serving as President of the PA Lifer’s Assoc. Since his release in 2011, Mr. Werts also spoke of his current work as Think Tank Coordinator with Temple University’s Inside/Out Program.

But why did we, as a ministry team of the Moravian Church Eastern District, want to sponsor such an event, lending a visual stimulant to criminal justice reforms and conversations in our community?

At the 2016 synod of the Moravian Church in North America, Eastern District, criminal justice reform was identified as an area of engagement for our churches and communities.  Following Jesus’ commandment to see the presence of God in the prisoner (Matthew 25:34-36), Moravians were encouraged to engage in the needs of those in prison, in questions of justice, dehumanization, and the needs for reform.

Prisons are often difficult and daunting places to visit, and the Church and Society Ministry Team asked themselves how we could engage in “visiting the prisoner.”  We identified an engagement with art as a transformative way to see the humanity of the incarcerated and also be engaged in the needs for reforms that their art and stories can raise. 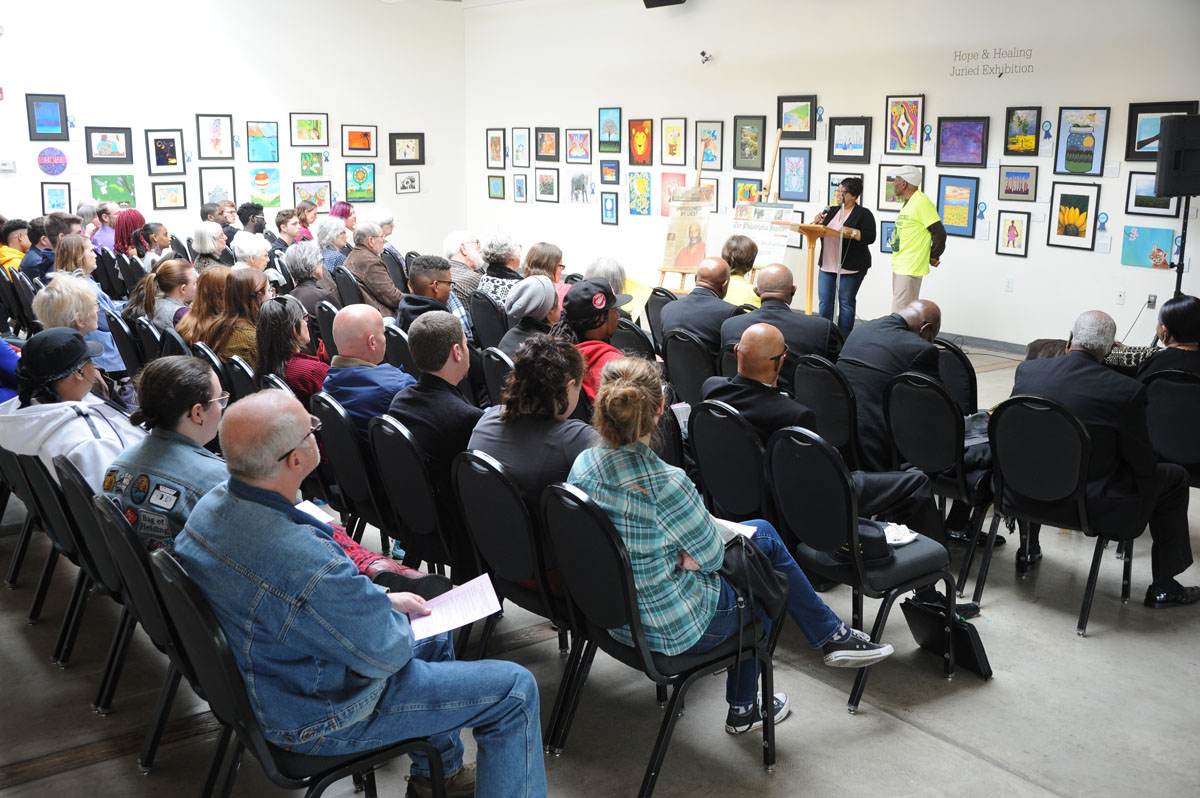 Art for Justice (www.artforjustice.org), a local non-profit, made an ideal partner to accomplish these goals as they are committed to promoting public dialog on ways to prevent crime, reduce levels of incarceration and find effective, humane ways to improve the criminal justice system.  Their mission is carried out through the means of artwork from local incarcerated people and the programs surrounding such artwork.

We believe that through the special programs and simply the sharing of the artwork for the public to view at no cost for nearly two months, we helped to share the stories of the humanity of the incarcerated, the need for criminal justice reform, and the hope that we can share in working toward these goals together.

The Rev. Janel Rice is pastor of Calvary Moravian Church in Allentown, Pa. and a member of the Eastern District Church and Society Ministry Team