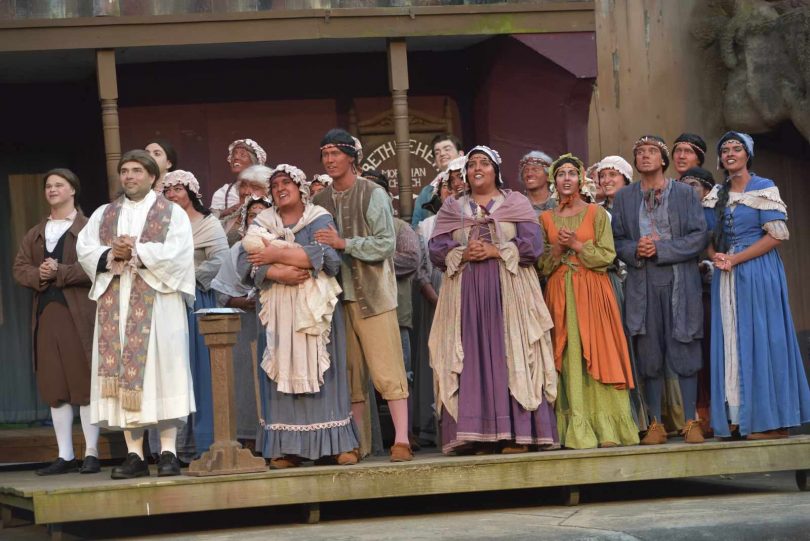 It is 8:30 p.m. in the city of New Philadelphia, Ohio. Anticipation looms in the air at the sight of a wonderful amphitheater tucked into a hillside of the Tuscarawas Valley. The sun just begins to set as one lone actor, dressed in the colonial garb of 1772, complete with a tricorn hat, positions himself downstage right of the outdoor theater, illuminated by a lone spotlight. An actor portraying Moravian missionary John Heckewelder, proclaims, “More than 200 years ago, we Moravians came into this valley to build here, the first settlement in Ohio, the settlement of Schoenbrunn.”

For the past 50 years, Ohio’s first and finest outdoor drama, Trumpet in the Land has celebrated the story of our Moravian mission-minded leaders that ventured into the “wilds” of Ohio in those prerevolutionary war days. Set during the heated conflict of our nation’s search for freedom and independence from Great Britain, this powerful drama, written by Pulitzer prize-winning playwright Paul Green, depicts the fortitude and passion of Moravian missionary David Zeisberger as he led a small community of Christian Delaware native Americans on their quest to live in peace and harmony in eastern Ohio.

In the spring of 1772, some 26 people established the first settlement in the Buckeye State. This practical and peaceful settlement was named Schoenbrunn, which means “beautiful spring” in German. These industrious and faithful Moravian missionaries and native Christian Delaware people built the first Protestant Church and the first school west of the Allegheny Mountains. Trumpet in the Land portrays this iconic story of faithfulness, determination, humor, conflict, tragedy and inspiration. The story launches images of personal fortitude, tenderness and heroism needed to establish a Christian mission village of harmony and equality in the throes of the American Revolutionary War. 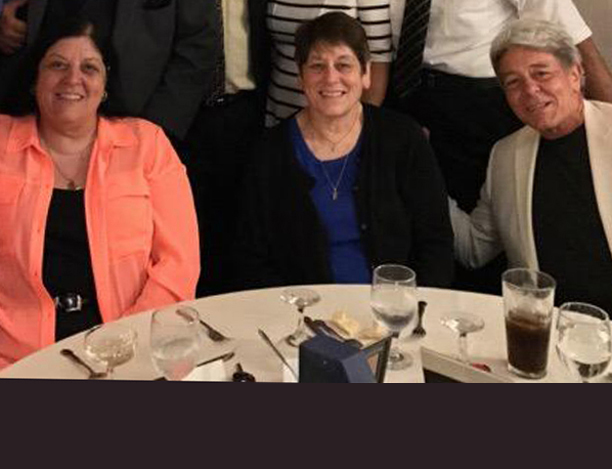 Behind the scenes of this outdoor power- drama stands a company of actors, technicians, leaders, administrators and volunteers staging this potent production each season. At the center of this entourage of playhouse leadership are siblings Margaret, Roseann and Joseph Bonamico. These delightful sisters and brother have been staging this program since President Richard Nixon was in office.

Margaret has worked behind the scenes for Trumpet in the Land for the past 48 years, 32 of them as general manager. She says, “Managing productions the size of Trumpet takes long hours, endless details and mountains of paperwork. The process is like assembling a giant puzzle; there are many pieces that all need to fit perfectly before the full mosaic can be appreciated.”

The play uses multiple props and special effects including the traditional theatre sounds and lights along with more complicated features like fires, weapons, horses and more. There are so many elements that go into an outdoor drama but the one biggest, uncontrollable element and nemesis remains Mother Nature. Sometimes, the show “cannot” go on and yet the bills still need to be paid (one of the drawbacks of hosting outdoor entertainment.)

Roseanne Bonamico, the eldest sibling, remains more than Margaret’s “Girl Friday;” she is the house manager for all of the productions the troupe produces each season. Roseann truly lives up to her title as she can be found managing the concessions stand, taking tickets, greeting the audience, cleaning the pavilion and supervising more than 60 volunteers who work as ushers, parking attendants, custodial assistants and grounds keepers.

So as the older Bonamico sisters gravitate toward the production side of the drama their younger brother, Joseph, focuses on the artistic side, directing and acting in Trumpet in the Land. Joe has helped to tell this incredible Moravian story for the past three and half decades in the role of Simon Girty, the adversary to David Zeisberger in the play; he also played Girty in a History Channel documentary. Joseph’s talents extend beyond the amphitheater stage as he also appeared on screen, television and in a Super Bowl commercial to boot. However, Joe’s true love remains live theatre. You can see that passion for the theatre, each time he steps onto the stage of Trumpet in the Land. He never disappoints in a story and character that he has walked with theatrically for the past 33 years. 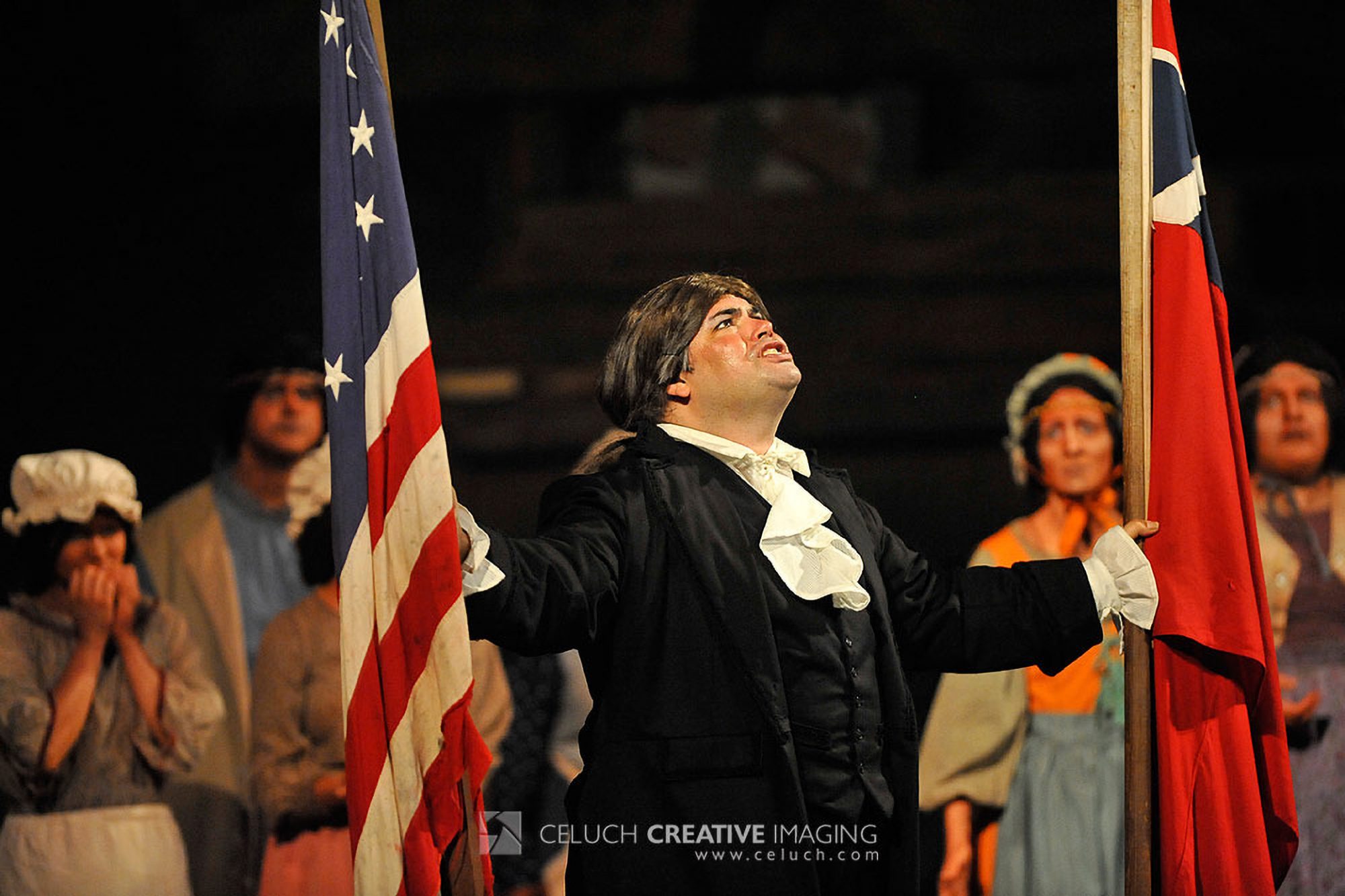 Scene from “Trumpet in the Land”: Zeisberger takes the American and British flags and pleads with Simon Girty and Ben Campbell to stop fighting.

Trumpet in the Land blesses the community by opening the doors for many local, aspiring actors as well. College theater students throughout the region have honed their skills and spent many a warm, sticky summer in Ohio telling our story. Local talent of all ages have also polished their raw potential on the stage in the hills. The Bonamicos’ generous hearts and spirit to the community have used this stage and Moravian story to plant seeds in the lives of many a young thespian. Margaret believes in the last 50 years, approximately 4,000 actors have graced this beautiful theater with their passion to tell a story of peace and brotherhood.

New ideas continue to brew in Margaret’s mind as she desires to develop a smaller version of this Moravian/ Delaware story to bring into the local school districts to enhance the teaching of Ohio history. “Knowing the historical context of the real drama helps us to learn from our past and makes us less likely to repeat such mistakes in the future,” says Margaret. “The Trumpet in the Land story still speaks to us today. We still face and fight the same wars of racism and bigotry some 250 years later.” Trumpet in the Land helps us come face-to-face with our own iniquities of social justice. 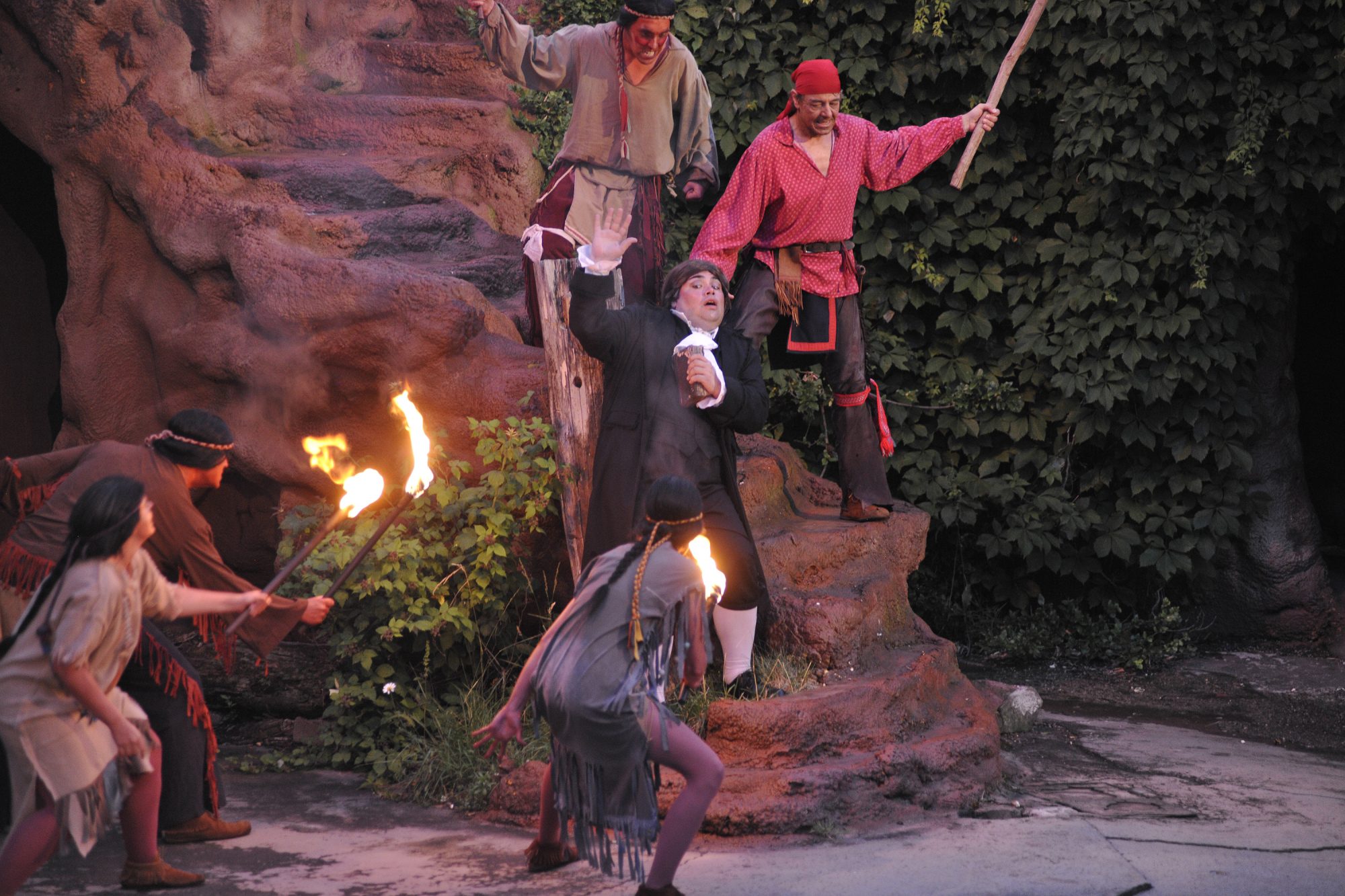 On behalf of the Moravian Church and the people of northeast Ohio, we thank Margaret, Roseann and Joseph Bonamico, our faithful Catholic friends of Christ, for their steadfast, compassionate witness in telling the story of David Zeisberger and the Delaware Nation:  a living portrait, a relevant story in one dramatic and heroic work we call Trumpet in the Land.

Come visit us for our 51st season in the lush Tuscarawas Valley of Ohio.