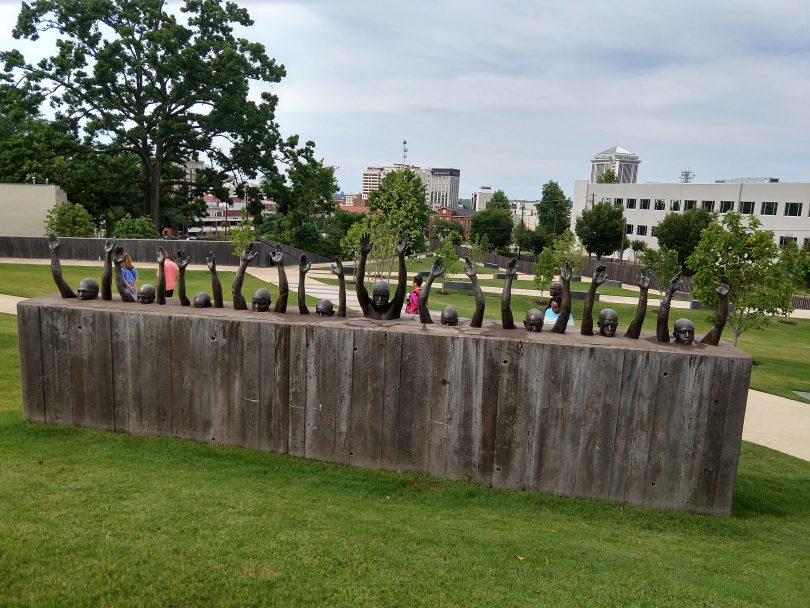 At the invitation of Churches Uniting in Christ (CUIC), an ecumenical body that includes the Moravian Church Northern Province, five clergy (Marian Boyle Rohloff, Mark Breland, Sue Koenig, Betsy Miller, Neil Routh and Hermann Weinlick) from the Northern and Southern Provinces attended CUIC’s annual meeting in Montgomery, Alabama. A significant part of our time together was focused on learning about the history of systemic racism in America. We chose to attend in part because of the efforts of both provinces to dismantle racism.  (Note: Both Provincial Synods in 2018 passed resolutions addressing racism and discrimination.) 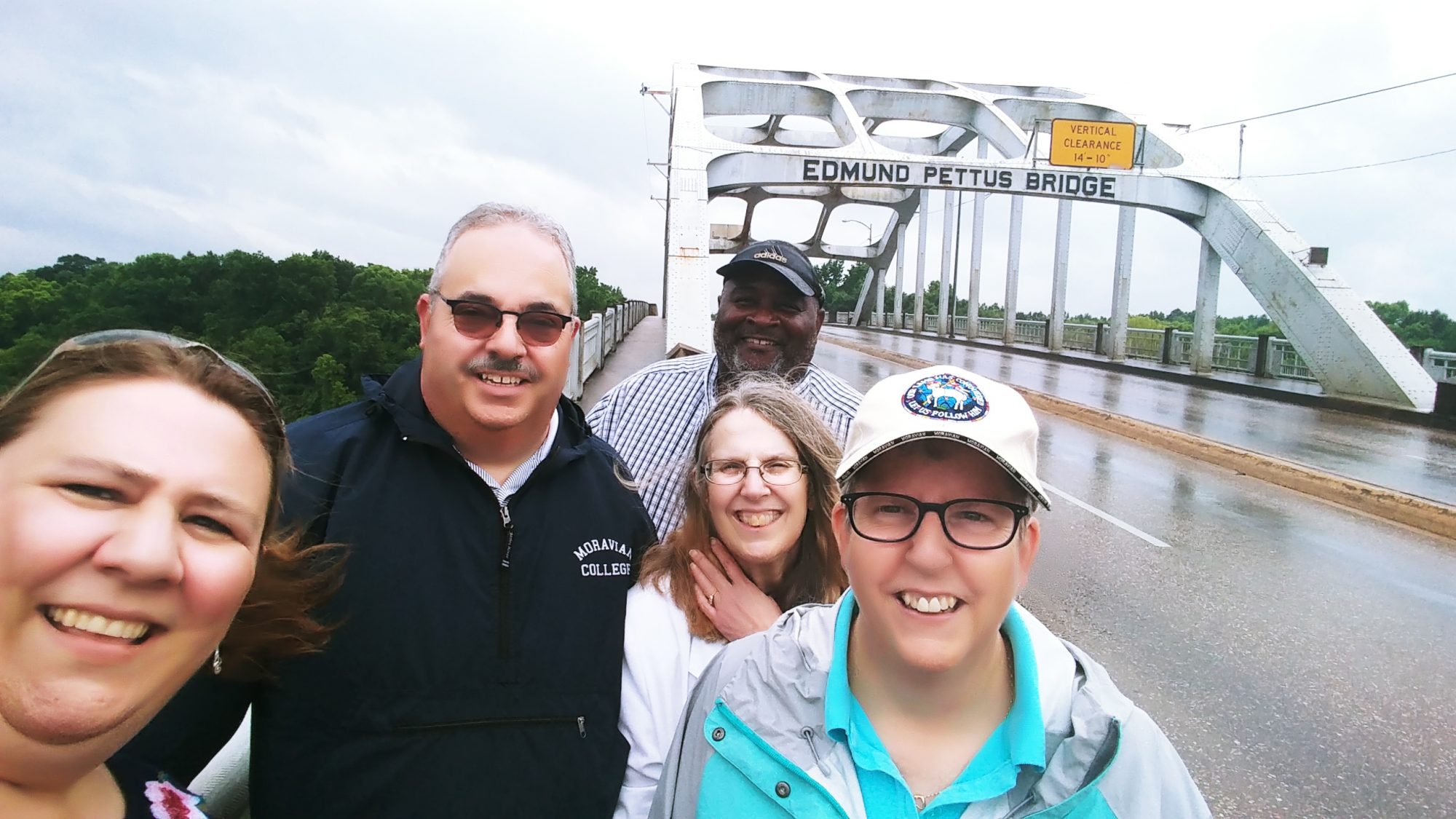 Four of us arrived in Montgomery early so that we could drive to Selma, Alabama and walk across the Edmund Pettis Bridge, the site of the 1965 “Bloody Sunday” when Dr. Martin Luther King, Jr. and others tried to march from Selma to Montgomery to call for voting rights for people of color. Just walking across the bridge helped us begin to grasp the plight of those who embarked on this four-day journey toward freedom.

The next day, along with all participants at the ecumenical gathering, we visited the Dexter Avenue Baptist Church where Martin Luther King, Jr. served as pastor. We then journeyed to the Equal Justice Initiative Museum and Memorial (https://museumandmemorial.eji.org/).

The museum, built on site of a former slave warehouse, overwhelmed us with scenes, videos, historical clippings, and data that portrayed the magnitude and extent of systemic racism across the United States. Where the museum was filled with information, the memorial was hauntingly silent as we walked among 4,000 steel coffin-shaped boxes hanging from above. Known as the “Lynching Memorial,” the boxes depict, by county, those who were lynched, often with the explicit support of the local, state or federal government. It was very difficult to even walk the entire circuit, with tears and disbelief that human beings could treat other human beings so horrifically.

Here are reflections by some of the Moravians who participated:

I still feel overwhelmed by the magnitude of evil actions and yet heartened by the hope and faithfulness of those who resisted.

One thing that struck me was the awareness of how recently Jim Crow-era practices were still in place, and how the generational trauma would be very real and close to the surface. I very much appreciated how the Legacy Museum lifted up present day systemic racism and the New Jim Crow (read The New Jim Crow by Michelle Alexander and watch the documentary “The 13th” on Netflix).  As people of faith there is absolutely no way that we can say one race is more crime-prone, dangerous or inclined to drug use, so why is it that black and brown people are incarcerated at a higher rate than white people…there are systemic issues at work.

In our U.S. Moravian context, our communities may include a few people who are African American or those people of color emigrating from other countries.  However, I think it may be important to highlight the systemic nature of racism that is part of all our lives and how power is understood in this country.

I was also struck at the Dexter Ave. Memorial Church by how that congregation became a vehicle for social change.  What if we can see our role more in this transformative sphere?

I am deeply grateful for the opportunity and experience of going to Selma and Montgomery. I feel great sadness, grief, guilt and remorse for what I saw, and I was greatly disturbed by the cruelty and abuse that people suffered. I am continuing to pray and think about the experience and how it might be used in efforts to “name the demon” of racism and work to dismantle and end racism in our church and society.

I reflected on themes of risk and sacrifice: after the march from Selma to Montgomery, people lost their lives; others lost their homes. Debriefing after visiting the EJI Museum and Memorial, an African American woman shared the need to develop trust of white people and she sees a significant part of the trust-building as a willingness to risk (and to sacrifice).

“Slavery didn’t end in 1865, it evolved.” This was evident as I toured the museum – and moved through exhibits of slave auctions, lynching notices, and mass incarceration; and then to the Memorial with the remembrances of more than 4,000 people who were lynched. The reasons for lynching were often trivial: a 14-year-old boy “frightened a white girl”; “asked a white woman for a drink of water”; “testified against a white man for the rape of a white woman.” I was struck by similarities to today: reasons for the shooting of black children – he had on a hoodie; he had a cell phone and candy in this hand. 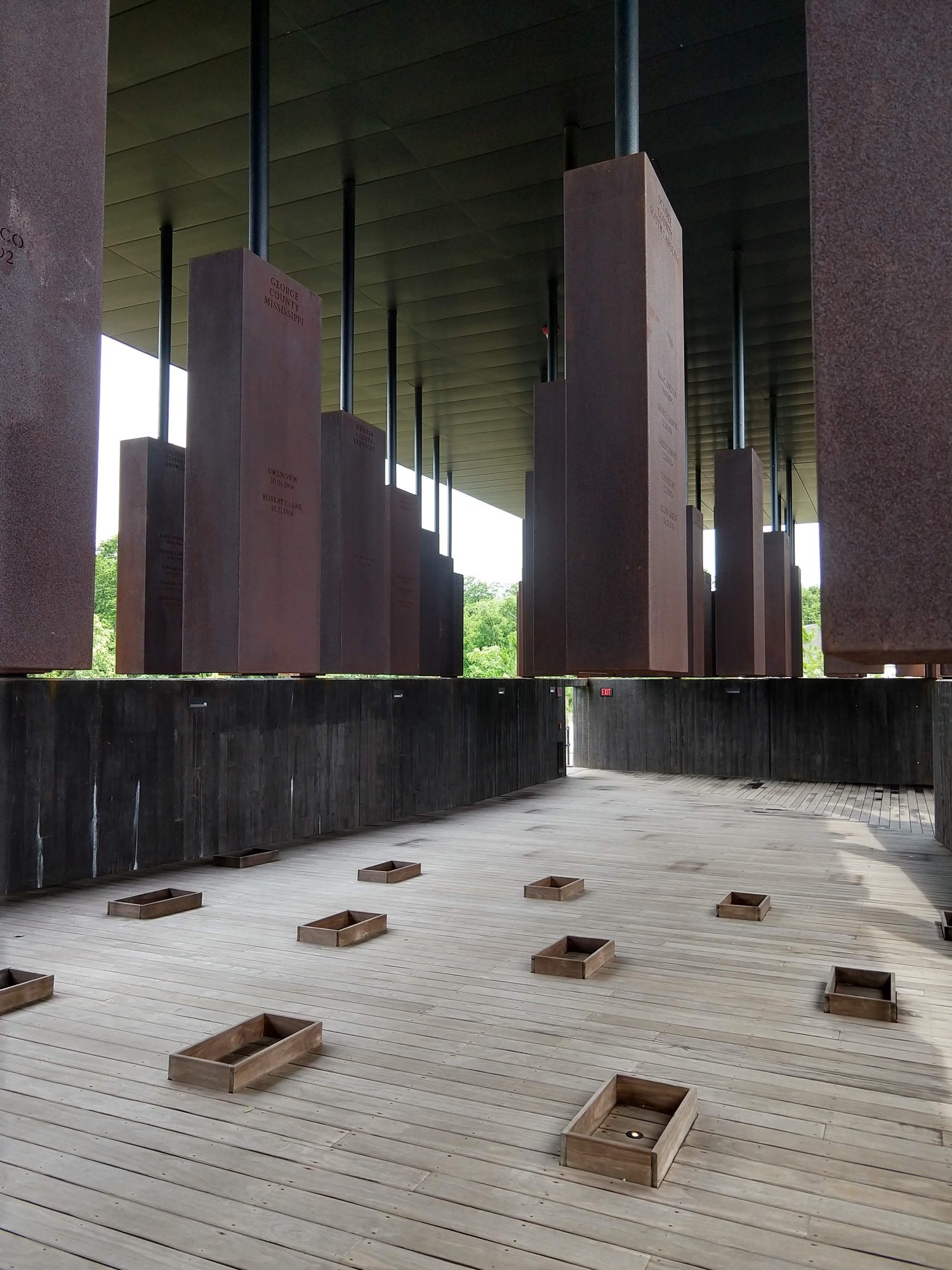 A memorial with remembrances of more than 4,000 people lynched.

I feel very honored to have been part of the CUIC Plenary Session, and the excursion to Selma. I continue to process the collective experience. The visits to Selma and Dexter Church and the EJI exhibits were profound.

I intend to report back to the Southern Province team about the experience of Montgomery and Selma and encourage making connections with EJI to explore how we go about a truth and reconciliation project on the subject of slavery in Old Salem (i.e., when the Southern Province as an entity owned slaves).

Most of my ecumenical contacts remind me that the Christian church is not a white church and that the concerns of non-white American Christians are often different from the concerns of white American Christians. Yet in the United States we can hear voices who suggest or assume that the Christian church is white or that whiteness is essential to our national or Christian identity. Even today, not being white is often a handicap in education, employment, or buying a home, through systems that, often unintentionally, favor white persons.

We are members of a denomination whose major mark in church history is as a missionary church, going to the far corners of the world, to people mostly not white, to tell the story of God’s love in Jesus for all humanity, not just those who are white.

“A time of renewal and a sobering experience…” 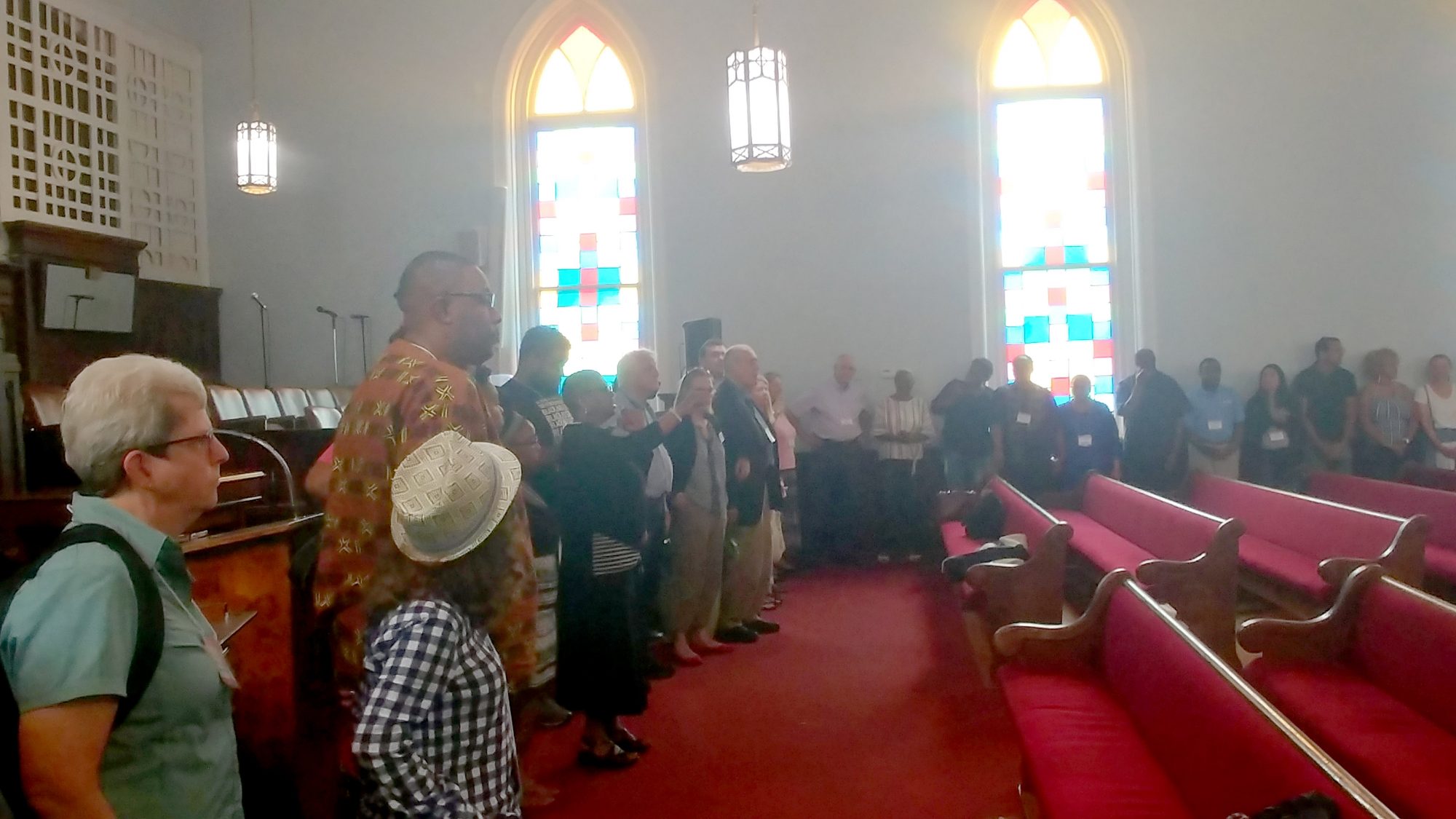 It was an honor to represent the Moravian Church at the 2019 CUIC Plenary. It was both a time of renewal and a sobering experience. The singing, preaching and genuine love shared during worship at the Dexter Avenue Baptist Church reminded me of the unique African-American worship experience at Second Moravian Church in Indianapolis, Ind. I felt inspired to let God’s love continue to inform and guide my witness as a child of God.

How does one respond to “those” who feel hatred towards me and others like me because of my skin tone? It is disappointing to hear our president make racial comments and know many brothers and sisters of the faith support his statements. Indeed, as a community, we have missed the mark. I am in touch with my anger, though I work to suppress it, at “those” white folks that hate me and the systems that promote and sustain racism.

To some extent, I was lost. God had not left me, or I God; I no longer recognize my world and my heart ached for answers in these turbulent times. Worship gave space for God’s Spirit to lift my spirit and bring healing to my troubled heart. I was unsure how to engage this “new” world with an aching heart. I learned that I could not hope to confront the prejudice within me and in others without God’s love as my foundation. I have a renewed understanding of Mark 12:30-31 as I hope to “Love the Lord your God with all your heart and with all your soul, and with all your mind and with all your strength. The second is this: love your neighbor as yourself…”

It was difficult to feel “loving” after reliving our shared history of racial injustice as taught at the Legacy Museum. The narrative museum uses media, video, sights and sounds of the domestic slave trade, racial terrorism, the Jim Crow South and mass incarceration to connect and weave together our American story of racism. The sobering and disappointing truth is in the knowledge that the “Church” has been complicit in establishing, enabling and encouraging racism in every generation.

I am convinced the Moravian Church cannot be silent in this present battle against racism. We must find our voice and have an active presence to promote racial justice. My Montgomery experience taught me that people suffered and died to change the hardened hearts of their neighbor. It was personal! They were victories because a faithful branch of the “Church” sacrificed to make love and justice a reality.