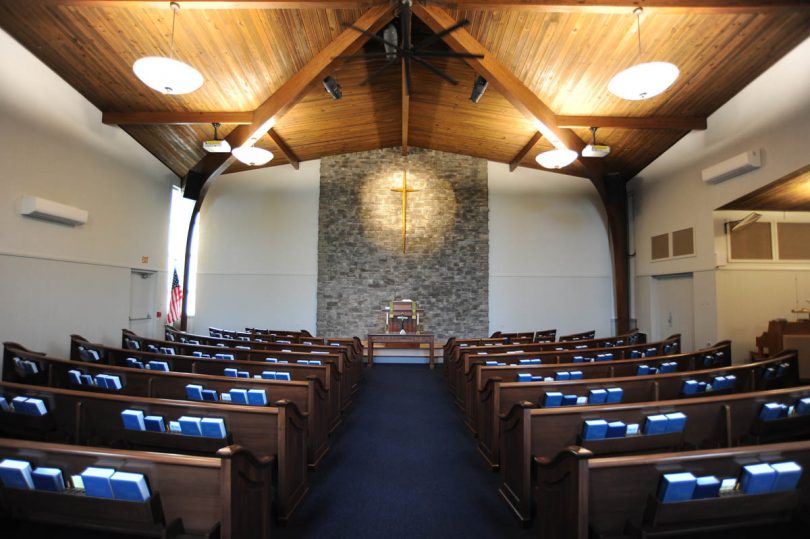 Exchanging the old for the new always leaves a mix of bittersweet feelings and excitement. The congregation of East Hills Moravian Church in Bethlehem, Pa., was no different as they renovated their sanctuary over the past two years. But in fixing the things that needed fixing—tearing out old carpet, removing pews, repairing the roof, changing the light fixtures and switching up the color palette—they’ve also enhanced the worship experience of many in the congregation.

East Hills made the decision to start a capital campaign and renovate their sanctuary in December 2017. It was a decision, like many others, made out of necessity. The main problem that led to the decision was the state of the roof. Every time it rained the roof leaked in the sanctuary, causing water damage on the carpet and the pews and leading to concerns about mold under the communion table. More worrisome, however, was that whenever there were heavy rains or storms, the water actually started to come through the light fixtures in the sanctuary with water collecting in the light bulbs. Additionally, the water damage on the pews was so bad that people were worried about the pews breaking when people sat on them.

A secondary concern was the lack of an air conditioning system in the sanctuary for summer worship. When temperatures rose too high for comfort and safety levels, the congregation worshiped in the church’s air conditioned Family Center. However, to many, the situation was not ideal; they wished to worship in a sanctuary rather than set up a temporary worship space each Sunday in what is basically a gym.

When the decision to renovate was made, design questions began. Capital campaign and construction committees were organized and work soon began in earnest. Having spent hours on the smallest details of things people may not even notice, the committees gave progress reports to the congregation as decisions were made so that the whole church felt involved in renovating the sanctuary.

Following the decisions and design work, construction on the renewed sanctuary began. East Hills now has new, dark grey-purple carpet and red oak pews, as well as chairs that look identical to the pews but can connect and disconnect to be moved around as needed. These chairs allow for the front of the sanctuary to easily be set up for VBS skits, handbell performances or additional seating space.

A new roof is on the sanctuary and new light fixtures hang from the ceiling, giving off a soft yet bright light. The new windows also bring in more natural light and prevent temperature fluctuations, while the air conditioning and heating system keeps the sanctuary at a comfortable temperature.

At the front of the sanctuary is a wall of dark grey stone, upon which hangs the cross from the original sanctuary. The cross is back-lit by colored LED lights, which can correspond to the liturgical colors for the week. The pulpit and communion table are new as well, and on the pulpit an intricate Moravian star is etched on its surface, the different layers denoted by minute color differentiation.

Another new addition is the multimedia system, which allows for projection off of any handheld device that is connected to it. Thus, as services progress, the pastor can project hymn lyrics, prayer texts and images on the wall, adding to the overall worship experience. The projection allows people who have difficulty reading the smaller print in, or cannot pick up, the Moravian Book of Worship an alternate way of participating in the service and gives the pastor a chance to refer to an illustration over the course of his sermon or the service itself.

When asked what they enjoy most about the new sanctuary, members had this to say:

Nancy Costa replied that she liked “everything except the carpet” and that “The sanctuary is very warm and inviting. I love the stone wall and the fact we still have the cross from the old sanctuary.”

Mike Taylor said he liked “the rock behind Pastor Derek when he gives his message” and the “projection on the wall for when lay readers are reading the Bible.”

Jay Larson answered, “It is a much more comfortable, inviting, accessible and flexible space, but the old sanctuary is still evident in the basic architecture and general layout of the space and the wonderful memories are still there.”

Of course, people enjoyed the old sanctuary as well, and certain things will be missed but they are, for the most part, less tangible than the new additions and are centered in memories. Mike Taylor said he liked the praise time before Sunday School classes and the messages delivered by the pastors; Jay Larson said he enjoyed the memories the old sanctuary held like the baptisms of both his children and the funerals of close friends, as well as other meaningful events and services; and Nancy Costa said she enjoyed the old sanctuary’s cross the most.

She says, “it was always a focal point during the doxology and prayer. I always felt a closeness to Jesus Christ and God when I looked at it. During the last big capital campaign I fought that the cross would remain if the sanctuary was remodeled. I am grateful that was not an issue this time.”

As mentioned above, the new sanctuary has some technological additions as well as new heating and cooling systems. When asked whether or not the additions have enhanced their worship experience, the three respondents had this to say:

From Jay Larson: “I am much less distracted by the old sanctuary’s deficiencies and am able to engage in worship. The air quality and temperature/humidity are much more comfortable, as are the pews. The use of the projection system is helping us more fully engage. The versatility of the new space has been proven for a variety of purposes, including worship, funerals, baptisms, Bible studies, VBS and other special events/gatherings.”

From Nancy Costa: “Although I am very proud of the new sanctuary and it takes my breath away still when I enter it, it has not enhanced my worship experience. The pastor’s sermons and the hymns are what are important to me not the space.”

However, she also added, “It is much easier to have the handbells set up as this is a very enjoyable addition to any service. It is a big job to set them up but the ability to remove some row of ‘pews’ [referring to the movable chairs] and make the space less crowded is definitely a major plus. The choir has the appearance of being less crowded and more comfortable. Being able to remove the chairs there for more instruments to play is also an asset.”

Mike Taylor added, “The new sanctuary moved me, especially with my dad’s memorial services this past June.” Mr. Taylor’s memorial service is a good example of how versatile the new sanctuary has become. In the morning, the sanctuary was set up for Vacation Bible School, a full set and props on the platform where the pulpit normally sits. As soon as the kids were dismissed for the day, church members came to take down the set, move the props and reset the sanctuary for Mr. Taylor’s memorial service. It only took fifteen minutes to move everything and put in a row of chairs to serve as an additional pew on both sides of the sanctuary. The next morning the VBS crew came in and spent fifteen to twenty minutes setting up the stage again, and the kids were greeted with the same set they had seen the day before. Because there were moveable pews and a moveable pulpit, the sanctuary easily transformed from one space to the next.

East Hills Moravian Church is very happy with its new look and though some may think everything has changed, at its core East Hills is the same. As Jay Larson said, it’s like “a long-time friend who goes to a spa for a weekend and comes back looking a little different and is somewhat rejuvenated, but you know is still you long-time friend on the inside.” n

Anna French is a member of East Hills Moravian Church and served as IBOC summer intern.