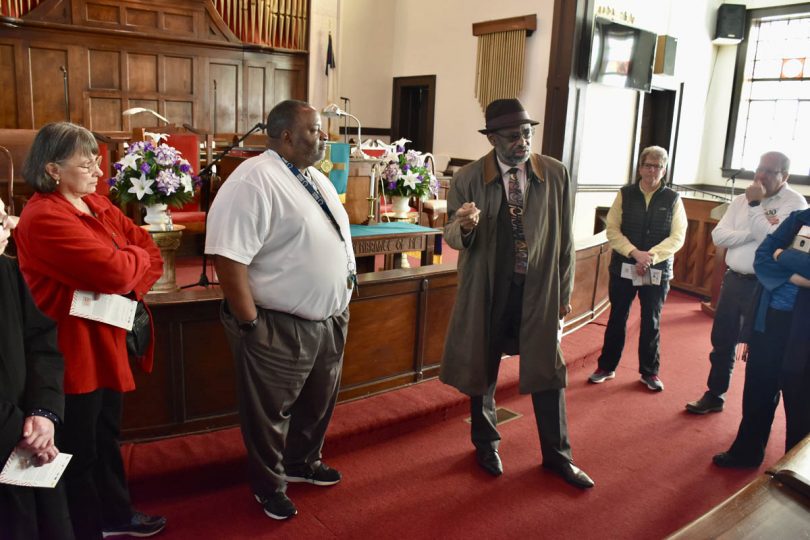 This past January, 19 people from across the Northern Province of our Moravian Church gathered in a conference center in Montgomery, Alabama, for a pilgrimage toward racial justice and healing. This pilgrimage, put together by the Provincial Racial Justice Team, served as the trial run for a very similar opportunity to be offered to all active clergy under call or appointment, approved ministerial candidates, and retired clergy from the Northern Province who are able to attend. Originally slated for this September (and postponed to 2021 because of the COVID-19 pandemic), the Racial Justice Team expects to bring 100 people together for this pilgrimage.

The seed for this effort was planted at the 2018 Provincial Synod of the Northern Province with the passage of legislation calling for the elimination of racism (institutional, systemic and personal).  This legislation called for the Provincial Elders’ Conference to “require all pastors, licensed ministers and candidates for ordination to receive anti-racism training.” (2018 4th Partial Report Church and Society Committee: Elimination of Racism: Institutional, Systemic and Personal).

In the summer of 2019, Marian Boyle-Rohloff, Mark Breland, Sue Koenig, Betsy Miller and Hermann Weinlick attended the annual meeting of Churches United in Christ in Montgomery, Alabama, a part of which included experiencing historic sites and museums that tell the story of slavery and racism in our nation.  It was a spiritual and transformative event, leading those who attended to wonder if this experience could be offered to all of our clergy.

The Racial Justice Team, which had been meeting since January 2019, started planning for an all-clergy pilgrimage, including plans for the ‘test-run’ that occurred in January 2020. The purpose of this pilgrimage was to learn about and to discover the history of racism in our denomination and in the United States. We were honest about our own history as a church and our complicity with slavery. The Rev. Dr. Frank Crouch, Dean of Moravian Theological Seminary, was moved to emotion as he read the diaries of some of the slaves owned by Moravians. One of our white bishops, who had begun to do ancestry work, read from the list of property that his family owned; among the animals and farm machinery was “a young Negro slave girl.” 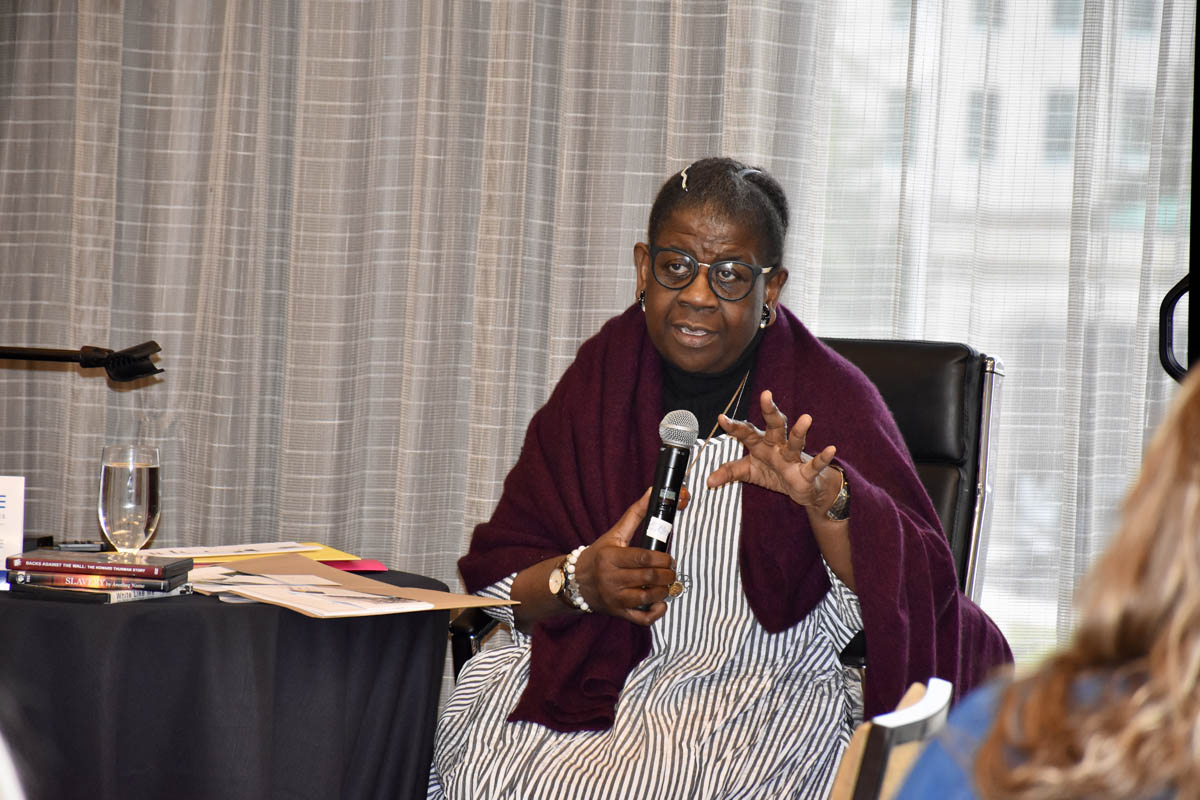 We invited Dr. Catherine Meeks, a speaker steeped in racial justice work in the Episcopal Church, to guide us.  Dr. Meeks interwove her spirituality and personal stories with her extensive lifelong academic, community and church work to dismantle racism.  Moravian clergy of color shared stories of racism they have faced in their day to day lives.

Over the course of the three full days together we confronted “whiteness” and the legacy of “white supremacy” which still governs much of our institutional life in the United States. Our hotel overlooked a beautiful fountain in the middle of Dexter Avenue which led up to Capitol Hill past the Dexter Ave Baptist Church were Martin Luther King, Jr., served.  We learned that the site of this fountain originally was a very busy trading block where slaves were bought and sold.

We attended various museums and historical sites, then made our way from Montgomery to Selma, the reverse of the journey made by Martin Luther King, Jr., and 25,000 others on the Selma to Montgomery March in the spring of 1965 demanding equal voting rights for African-Americans. We crossed the Edmund Pettus Bridge on a bright sunny day; the same bridge where the first attempt at this peaceful march began and ended with bloodshed and violence enacted by the white authorities. An unexpected coincidence allowed the 19 of us entrance into the Brown Chapel in Selma where this march was conceived, organized and originated. The current pastor invited us in and assured us of that fact that his church was still leading the march from salvation to freedom.

In Montgomery, we visited the Dexter Ave. Baptist Church where tours are offered by a woman named Wanda. Wanda speaks with the authority, passion and faith of a preacher.  She led us into Martin Luther King, Jr.’s office and showed us his 8 x 10 simply-framed picture on the wall of pastors that have served the church. She invited us into the sanctuary of the still active church, and we gingerly took turns standing in the pulpit. She sang with us and preached the love and hope she embodied. 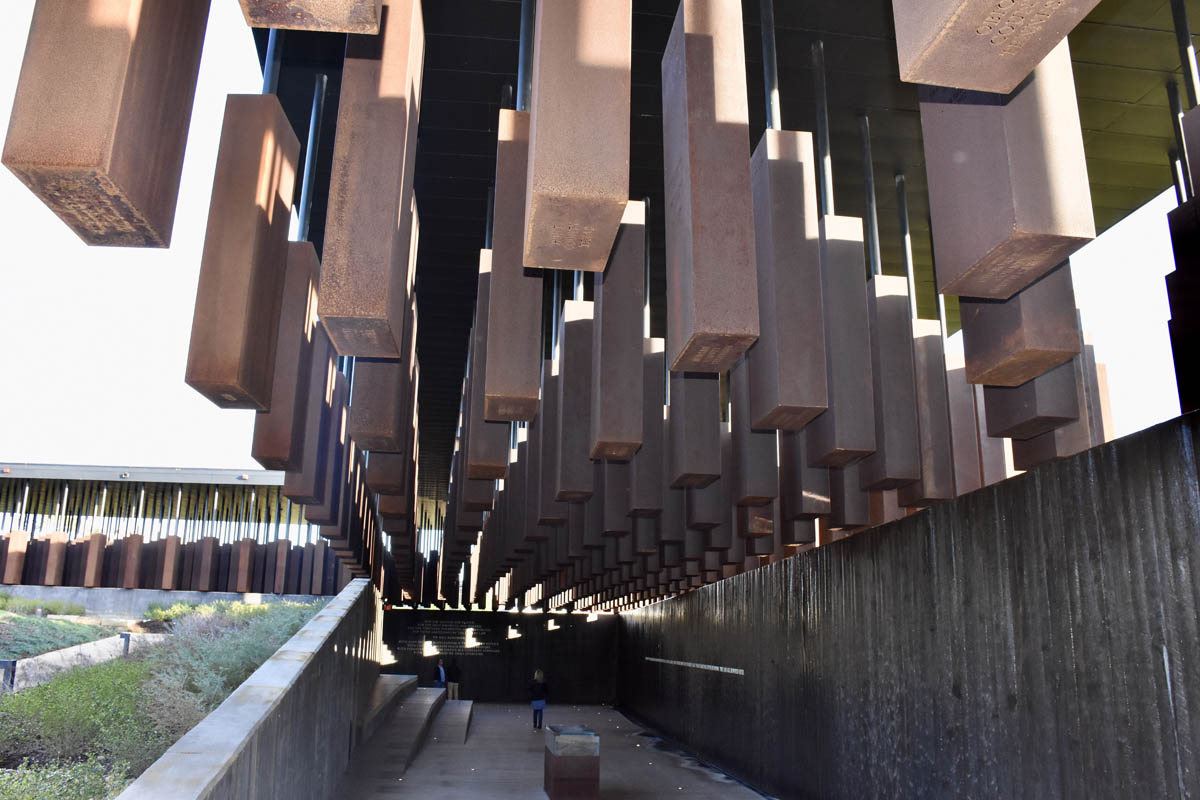 All of these experiences were memorable, but the Legacy Museum and Lynching Memorial (National Memorial for Peace and Justice) were profoundly moving and informative. This museum and memorial were created by the Equal Justice Initiative, the story of which is told in the current movie, “Just Mercy.”  Many of us came into the pilgrimage having read the book of the same name and having seen the movie.  This museum makes the compelling case that slavery is not dead and gone; it has evolved into mass incarceration. One of every three black boys born today will more than likely face some time in prison or jail.  First and foremost, this staggering number is not about choices made by any one individual; it is about choices made collectively and repeatedly in our legislative process.  Transformation begs to happen.

On the wall of the Lynching Memorial, where more than 800 six-foot boxes of corten steel hang symbolizing the more than 5,000 black men, women and children who have been lynched throughout the United States, are written these words:

We will remember…
With hope because hopelessness is theenemy of justice.
With courage because peace requires bravery.
With persistence because justice is a constant struggle
With faith because we will overcome.

On September 14-17, 2021, Northern Province ministers will make their way south to Atlanta, Georgia, from Alberta, Canada to Washington, D.C. and everywhere in between for a pilgrimage toward racial justice and healing. We covet the prayers of our congregations over these coming months as we make preparations for this pilgrimage toward racial justice and healing.  n

The Rev. Dr. Amy Gohdes-Luhman is pastor of Waconia Moravian Church in Waconia, Minn. She is a member of the Northern Province Racial Justice Team. On May 31, Amy deliverd a sermon discussing the events surrounding the death of George Floyd in Minneapolis, not far from her home, as part of a Moravian Church Without Walls Sunday service. See the service recording at www.moravian.org./2020/05/mcwwservices/  All photos by the Rt. Rev. Hopeton Clennon.