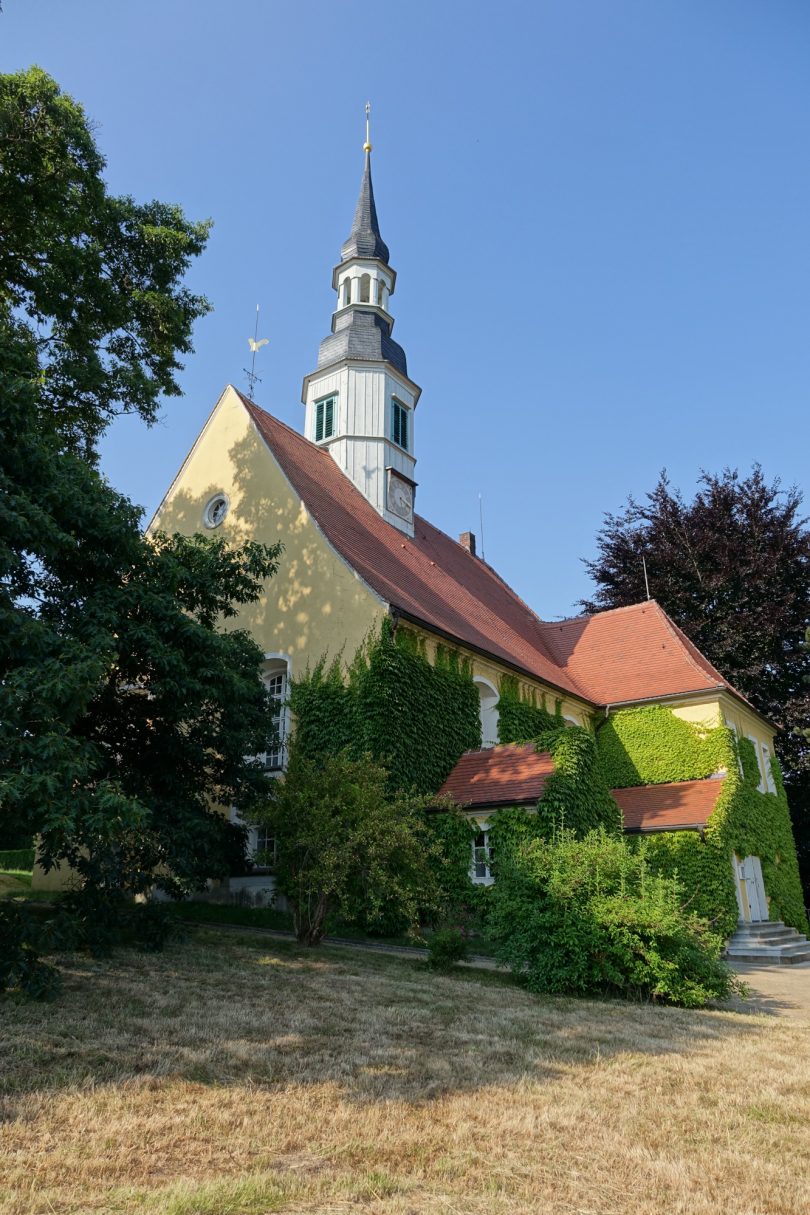 The second period in the history of the Moravian Church begins with the founding of Herrnhut in 1722. In that year, some families from Moravia, who had kept the traditions of the old Unitas Fratrum, fled from persecution in their homeland and found a place of refuge on the estate of Nicolaus Ludwig Count Zinzendorf (1700-1760) in Germany. Zinzendorf is considered the founder of the renewed Moravian Church and one of the most important theologian and leaders of religious awakening in the 18th century.

With the help of the carpenter Christian David, who cut the first tree on June 17, 1722, a small village was built. Its inhabitants hoped to live together as a community of awakened believers according to the example of the apostolic church. The village was named “Herrnhut,” which might be translated as “The Lord’s watch.” This name is a play on words to express the faith that the people living there would be “on the watch for the Lord” and at the same time “under the Lord’s keeping.”

Under Zinzendorf’s protection, Herrnhut attracted more Moravian refugees and also many believers and religious seekers from other places. As the community grew, differences among the inhabitants caused serious conflicts, leading to a severe crisis in 1726. Zinzendorf recognized that his intervention was necessary. He quit his regular employment and assumed a stronger leadership role in the Herrnhut community. In May 1727, he introduced a communal covenant, known as “The Brotherly Agreement”, which outlined his vision of Herrnhut as a community based on Christian love. He encouraged the inhabitants of Herrnhut to study the Bible and to pray for one another.

Then, on August 13, 1727, during a Holy Communion service at the Lutheran parish church in Berthelsdorf, the members of the Herrnhut community experienced a profound moment of spiritual renewal and reconciliation. It was like an outpouring of the Holy Spirit, which manifested itself in that, as one person observed, “we learned to love one another.” For this reason, the day is considered the spiritual “birthday” of the renewed Unitas Fratrum. It also has been called the “Moravian Pentecost,” although there were no signs of ecstatic or extraordinary spiritual manifestations. 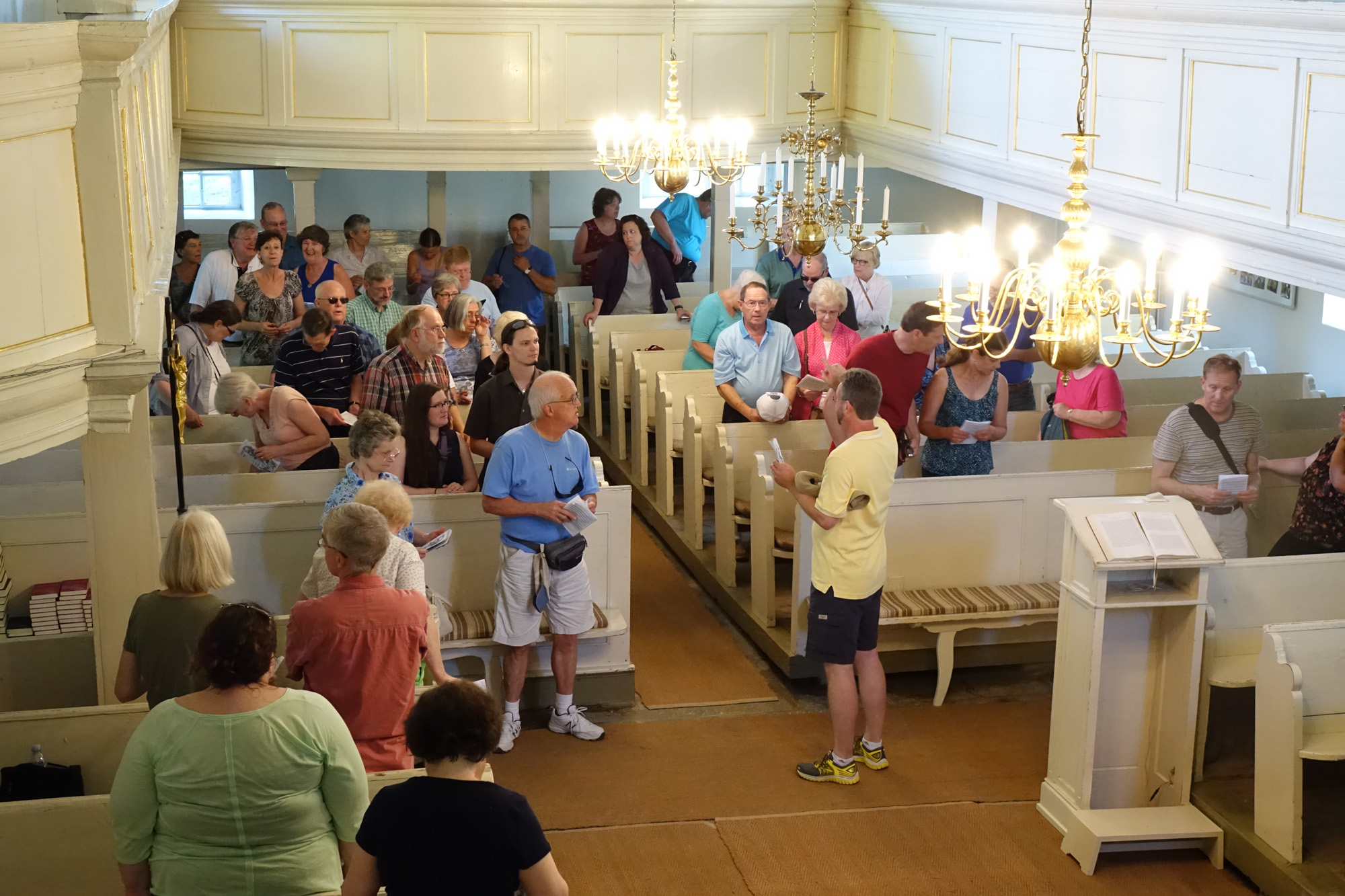 In 2015, a group of North American Moravians visited the Berthelsdorf church where the events of August 13 took place.

Probably for the centennial of the event, the English Moravian poet, James Montgomery, wrote the best word-picture known of what took place on August 13, 1727, and its results:

They walked with God in peace and love
but failed with one another;
While sternly for the faith they strove
brother fell out with brother.
But He in whom they put their trust,
who knew their frames that they were dust,
pitied and healed their weakness.

He found them in His house of prayer
with one accord assembled,
and so revealed His presence there
they wept for joy and trembled.
One cup they drank, one bread they brake,
one baptism shared, one language spake,
forgiving and forgiven.

Then forth they went, with tongues of flame
in one blest theme delighting;
the love of Jesus, and His Name,
God’s children all uniting.
That love our theme and watchword still;
that law of love may we fulfill
and love as we are loved.

The hymn, slightly altered, appears in the 1995 Moravian Book of Worship, 396.

With this new sense of unity and purpose, the Herrnhut community was transformed to grow into a movement for mission and evangelism of international scope.

The lovefeast of Apostolic times was resuscitated in its original simplicity by the Moravian Church in 1727. After the memorable celebration of the holy communion on August 13, seven groups of the participants continued to talk over the great spiritual blessing which they had experienced and were reluctant to separate and return to their own homes for the noonday meal. Count Zinzendorf, sensing the situation, sent them food from his manor house, and each group partook together, continuing in prayer, religious conversation, and the singing of hymns. This incident reminded Zin­zendorf of the primitive agape, and the idea was fostered until lovefeasts became a custom in Moravian life. They were introduced wherever new settlements were founded and so came to America.

The Liturgy for August 13 is available here.  Photo above is the church in Berthelsdorf, Germany where the event of August 13, 1727 took place.

Those who mock the poor insult their Maker; those who are glad at calamity will not go unpunished. Proverbs 17:5

Blessed are the merciful, for they will receive mercy. Matthew 5:7

Lord Jesus, keep us from being blinded by worldly distractions of power and wealth. May we share your gifts of love and mercy to all, even the guilty, the poor, and the oppressed. We pray that we live our lives to reflect all the goodness and grace you offer us each day. In Jesus’ name, we pray. Amen.