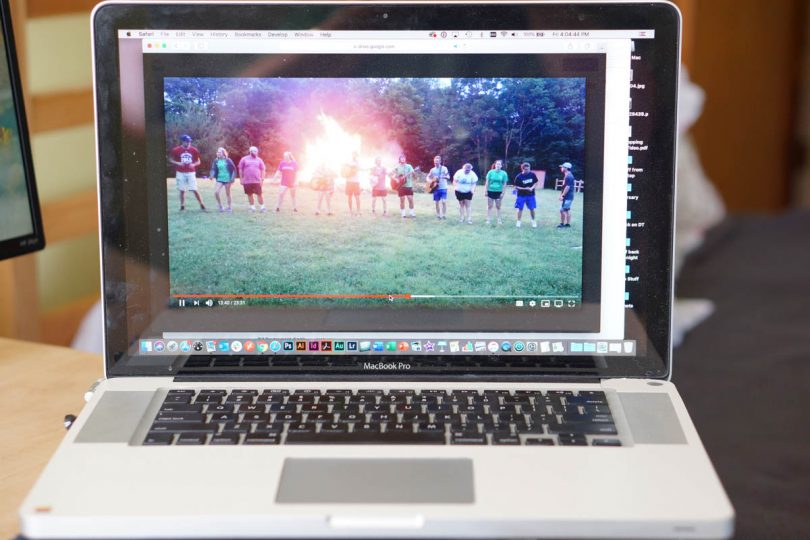 With the challenges and changes brought on by the COVID-19 pandemic, leaders of Moravian camping ministries across the Northern and Southern Provinces prayerfully considered what to do with the 2020 season. While a very difficult decision to make—and in many ways heartbreaking—stay-over camps for this summer were cancelled throughout the Moravian camping program.

However, that didn’t stop leaders from working to bring a little of the Moravian camping spirit home. In this issue, we look at just a few of the creative ways our camps reached out to Moravian youth and their families.

Even though they can’t be “on the mountain,” many campers from the Southern Province visited Laurel Ridge virtually, thanks to the efforts of the Laurel Ridge staff.

“Laurel Ridge has seen tremendous response from campers and parents with sign-ups for our virtual camp,” said Scarlett Dowdy, program manager at Laurel Ridge. “We are at nearly a 45 percent registration rate from last year’s numbers, with 175 virtual registrations, while some parents of campers allowed us to keep the full registration, whether their kids signed up for virtual camp or not.”

Each registered camper received a “Laurel Ridge Camp Crate” which included their camp shirt, 60th anniversary “swag,” a letter from a summer staffer, a canteen treat, s’mores kit, all their arts and crafts supplies, the curriculum and their own login information for Camp (held through Google Classroom which houses Zoom links and videos).

“For assemblies, we were able to split campers into small groups by using the breakout feature on Zoom,” explains Scarlett. “We also recorded all the assemblies in case campers missed one.” Instructions for Interest Group activities were also on video with the supplies required provided in the crate.

Campfires are a central part of the Laurel Ridge experience. Scarlett recorded the M-Staff campfires then included vespers provided by video from the various leaders and inserted them into the appropriate night’s campfire. The M-Staff also performed all the skits and were recording all over the mountain so that the campers could see the mountain during their week of camp. (Note that M-Staff were quarantined before being allowed to work and sing together.)

“We were very blessed to have 15 of our 16 summer staff request to remain on with us, even without campers present,” said Scarlett. “When informed there were no guarantees of salaries, all but three were willing to work the summer as volunteers. We approached several churches seeking donations to support summer staff salaries and we fully funded their salaries through donations from churches and other Moravian organizations.

“I am thinking as we move forward, we have learned a great deal about how to deliver an experience in this new way,” continued Scarlett. “I am even thinking long term, if a camper can’t attend physically, they could join us virtually as we have face-to-face camps.  This whole situation has made us all think outside the box in so many ways.”

Kids in the Western District also had opportunities to participate in a Moravian Camping experience, thanks to technology.

Chetek, the camp for senior high youth, offered a virtual experience for three days under the theme “Seeing Through the Chaos.” Half-day presentations were offered by pastors Greg Behrend, Amy Gohdes-Luhman and Kerry Krauss; each morning began with worship led by pastor Kurt Liebenow.  After each of presentations, campers and staff broke off into small groups for discussion.

Along with the daytime camp, evenings offered other possibilities. Each night included worship and some small group time, followed by camp favorites like Trivia Night, Game Night, and Mt. Morris Mystery Game. The week wrapped with a Zoom-based celebration including skits, songs and more.

And Camp MINDYY compiled several opportunities for campers.  Some of last year’s staff compiled a video for campers made up of some favorite activities, jokes and campfire skits, all performed by staff (and their own children), while a care package of additional activities and fun treats are also being assembled and is expected to be delivered to last year’s campers in the coming weeks.

“We are missing the fun of being together in person but recognizing ways we can try to bring camp back ‘safely at home’ to our wonderful campers,” said Kathy Liebenow of Western District camping.

While Camp Hope was looking forward to a big season this year, following renovations and upgrades made since last year, they made the decision last spring to cancel all conferences for summer 2020. But knowing that families still wished for a connection to that quiet place in western New Jersey, the staff and board of Camp Hope made several moves to keep some “hope” in their campers.

For starters, Camp Hope offered a “Box of Hope” for campers missing Camp Hope. On the camp’s website, Camp Hope staffers wrote, “While we can never replace the experience of a week (or three days) at Camp Hope connecting with God and camp friends, we Hope that this box of camp fun will bring some joy to your camper!”

The boxes contained crafts, camp reminders, Bible activities and more. Each Box of Hope was customized to the conference campers would have attended.

In addition, the camp made arrangements to allow families to rent cabins during July and early August. For safety reasons, these opportunities were just for families; groups of individuals were not allowed to rent. Meals were available from the dining hall “take-out” style, and families were invited to enjoy self-guided activities.

In 2019 and 2020, Camp Hope renovated its Lower Lodge with new heating, air conditioning and more to make it a year-round destination. Like other camping ministries, Camp Hope is looking into offering fall or winter retreats for different-aged campers should conditions allow. n