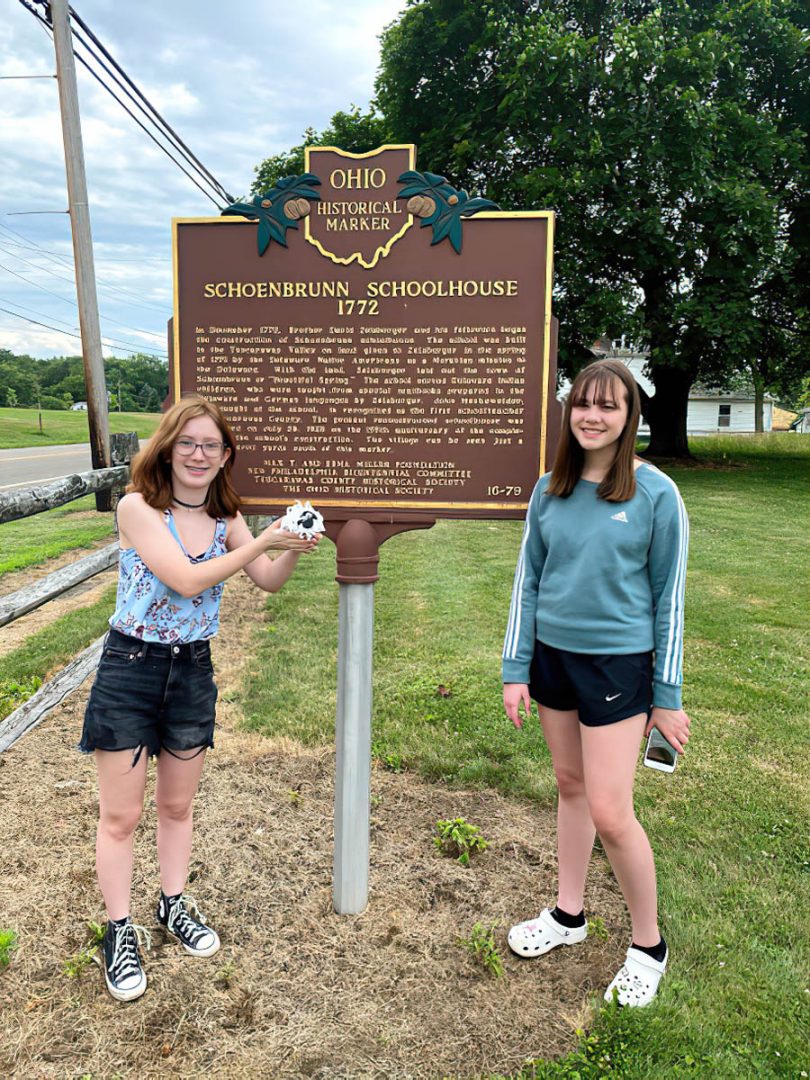 When members of the Christian Education Committee (CEC) of Schoenbrunn Community Moravian Church met in June, the words Vacation Bible School came on the agenda and you could hear a pin drop in this normally social and upbeat committee. No one wanted to be the first one to suggest the word that has become synonymous with 2020…”cancel.”

The committee knew that doing VBS the way it had always been done was out of the question this year, but they did not find the Holy Spirit leading them in a direction to not do VBS at all. They were stuck.

It was at that moment when committee member Missy Martin mentioned that she had been geocaching with her husband Ron and her two daughters, Chloe and Paige. She said it was a lot of fun, and a great way for a family of four to get out of the house and pass the time during the pandemic.

Geocaching is an outdoor activity where participants use GPS tracking systems on their phones to hide and seek little trinkets and prizes in containers for other participants to find. You never know what you might find and where you might go. 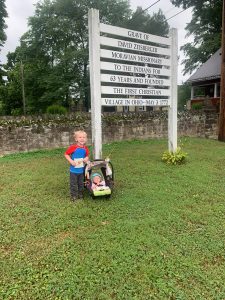 She mentioned that Tuscarawas County has many historical Moravian sites, some of which even life-time residents of the county have not visited. She then said, “What if we assembled a scavenger hunt of historical landmarks and churches in the county?”

The energy of the committee was re-ignited, and they went to work on this new idea. For the first time in months, there was no longer an event to cancel, but an event to plan! Missy worked hard on assembling clues about the churches and landmarks. She contacted local pastors and long-time church members for assistance in her fact-finding clues and interesting factoids. Aimee Pasquinelli designed little lambs for the kids to carry and get pictures with when they found their scavenger clue.

“Many of us have lived here most of our lives. There have been places we haven’t been to, landmarks we haven’t seen. This just made it fun,” said Carolyn Menapace, Schoenbrunn CEC chair.

Families were given a packet of clues for each site and some interesting facts about the site or church. For example, Connie Kinsey, Fry’s Valley, submitted this interesting fact about her church.

There is a grave in the cemetery here of a former Moravian minister, educator, and preacher’s kid. The man’s father was a martyred missionary in Nicaragua. He, his sister, and his mother escaped the country, running for their lives. The man is Karl Bregenze. His wife was Fry’s Valley’s own Isabelle Everett.

In a normal VBS year, parents would simply drop off their children and pick 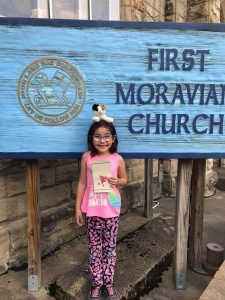 them up when the program was done. However, the history hunt had parents assisting their kids and learning more about the rich Moravian history of Tuscarawas County.

All the other churches in Tuscarawas County heard about the idea and decided to join in on the fun. Different churches picked different weeks to hunt to encourage social distancing. It was awesome to see kids from all over the county stopping in church parking lots and looking over the grounds for clues.

Paige Martin, 10, from Schoenbrunn, said her favorite part of the scavenger hunt was exploring with her family and learning more about her church.

Shelia Davis, Fry’s Valley, did the scavenger hunt with her grandson, Trenton. She said he learned a lot about Schoenbrunn Village.

She said, “Trenton learned a lot about David Zeisberger, Delaware indians and a primitive way of life. It was hard for him to imagine a schoolhouse and church without electricity, and that they had to make their own candles and clothes. He really liked the cabins.” 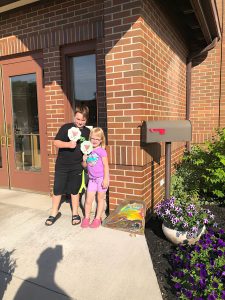 For many, the scavenger hunt was proof that fun and creative ministry ideas could happen during the COVID-19 pandemic. Members of the Schoenbrunn CEC said they could see doing another scavenger hunt in a few years.

Moravians throughout their history have adapted their mission to the needs of the people; the COVID-19 pandemic does not have to be any different. We can continue to find new and uplifting ways to share the Gospel. The source of the joy in our hearts is not circumstantial and is one clue we will not have to search for. Our lamb has conquered: let us follow him. Let us follow him into a new age of ministry. Amen.

The Rev. Ben Lippert is pastor of Schoenbrunn Moravian Church. In photos, VBS students participate in the scavenger hunt at a variety of historical landmarks in Tuscawaras County, Ohio.