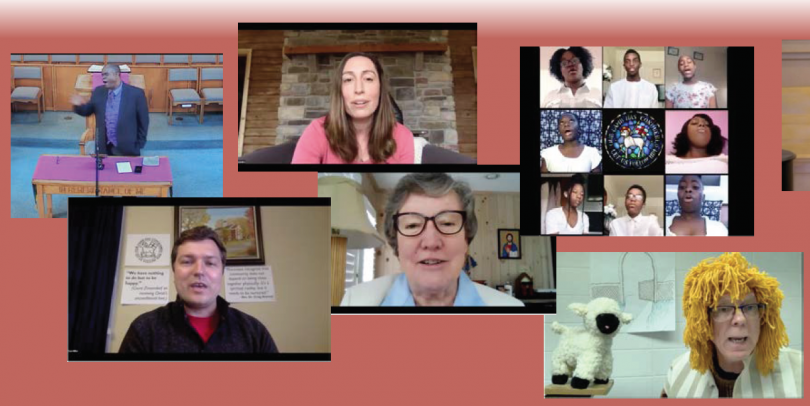 From March through September, Moravian Church Without Walls (MCWW) lived up to its name, providing virtual worship experiences for Moravians across the U.S. and Canada. Through their efforts, Moravians were able to worship—virtually—with churches and leaders from New York to Alberta, Florida to North Dakota, even other parts of the globe.

What started with a response to the sudden pandemic-caused closing of many Moravian churches became a 28-week journey.  Each Sunday, MCWW hosts Justin Rabbach, executive director of the Board of World Mission and the Rev. Dan Miller, pastor of Edgeboro Moravian Church in Bethlehem, Pennsylvania, offered a service from a different ministry, congregation or group.

“We began thinking we should plan a worship service just in case,” says Dan. “We didn’t expect to go on the six-month online journey that we did until we saw just how many people were worshiping with us on a weekly basis. Thankfully our existing connections and prior knowledge gave us a really good place to start.”

“MCWW was formed out of the hope to bring people together even though they were not able to be together physically,” says Justin. “When we started, it was more about reaching people from different geographic areas who wanted to grow in their faith together. When we saw in mid-March that many congregations were going to close rather suddenly, we began conversations with provincial leadership to offer up our virtual space, which was already in place.

“The first Sunday was a true team effort, with MCWW, the Interprovincial Board of Communication (IBOC), a Provincial Elders’ Conference president and a bishop working to put together a relevant worship and get it online. We had our hiccups getting up and running, but that’s okay, because MCWW has always been about being a creative, collaborative community that experiments and grows and learns together.”

Each Sunday, hosts Justin and Dan were joined by Mike Riess of the IBOC in presenting the online services. They helped produce services offered by the Southern Province PEC, the Board of World Mission, a group of Moravian bishops, the Moravian Music Foundation, teams of pastors from Canada and Pennsylvania, and many more.

Over the course of their 28 services, more than 55 congregations and agencies were represented.  Early services were presented live; as more Moravian congregations began producing their own online worship, MCWW’s services featured worship produced by individual congregations. For their final service of the summer, presented September 6, the MCWW team presented the service themselves, featuring some of the new music and liturgies that had been created during the earlier services.

And in addition to the Sunday services, MCWW teamed up with the IBOC, the Southern Province Board of Cooperative Ministries and readers from both provinces to produce online Readings for Holy Week services.  These services provided a dramatic reading of the Passion Week story, including music, reaching hundreds of Moravians each night.

Average online attendance for the MCWW live services (including both Zoom and Facebook live) was 211; later viewings of the recordings of those services averaged 1,300.  The largest live audience for an MCWW service included more than 400 viewers on March 29.

“It was incredible knowing that we were facilitating configurations of worship gatherings that probably wouldn’t otherwise have happened,” says Dan. “We had worshipers from over a dozen states and worship leaders from all sorts of Moravian congregations and entities—sometimes entire boards would lead a service. When else do we get to see Moravians from that many locations worship together? In that sense, it felt like a synod each week.”

“It was a few weeks in before I think I realized how amazing it was to be even a small part of this ministry,” says Justin. “Each week we had so much support from worship leaders across the Northern and Southern Provinces offering their gifts to put together worshipful content to meet the extraordinary circumstances we were facing. Then, I would scroll through the lists of participants during the service, and see names from around the Moravian Unity; one service had eight Provinces represented. While we were doing ‘Sunday morning’ worship, it was Sunday afternoon, or evening worship for some of our Eastern Hemisphere participants!”

In September, MCWW ceased their weekly services to focus efforts on preparing for Advent and Christmas.  “We invite those who followed the MCWW services each week to virtually visit other congregations over the next several months,” says Mike.  “This is a rare opportunity to observe the many styles and traditions of Moravian worship throughout the U.S. and Canada.”

MCWW services are archived on here and the group’s Facebook page.

The Lord is wonderful in counsel and excellent in wisdom. Isaiah 28:29

Christ came and proclaimed peace to you who were far off and peace to those who were near. Ephesians 2:17

Prince of peace, two thousand years ago, your arrival brought peace to a violent world. When we get caught up in the hostility of our present-day world, calm our hearts. We want to focus on the serenity and goodwill in our lives. Amen.