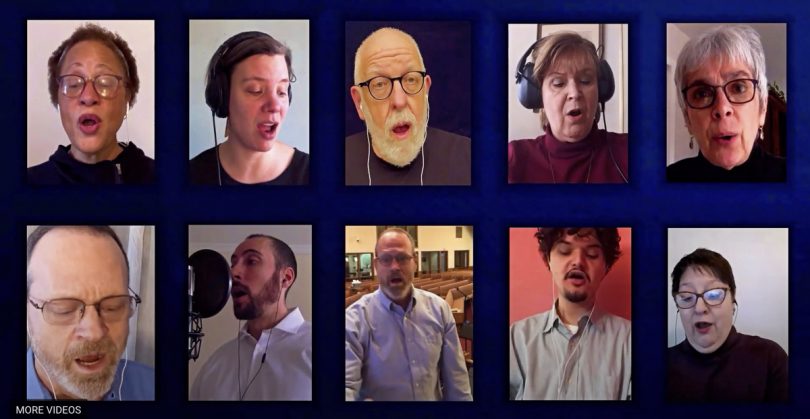 On February 10, 2011, hundreds of Episcopalians and Moravians gathered at Central Moravian Church,\ in Bethlehem, Pennsylvania, for a celebration of full communion between the Episcopal Church and the Northern and Southern Provinces of the Moravian Church.

“I have learned so much from our Episcopal siblings about courageous witness in the public square, which has emboldened our witness as Moravians,” said the Rev. Betsy Miller, president of the Moravian Church Northern Province, adding that communion is not a static agreement but a learning process. “Living into full communion is something that is never fully achieved, but remains a journey of discovery, renewal and enrichment,” she said.

“Our relationship as Moravians and Episcopalians could be looked at as just a nice church thing, but it is more than that,” said Episcopal Presiding Bishop Michael Curry in his sermon. “It is a sign. It is a witness. It is a yearning for what God yearns, not simply for the church but for the entire human family.” 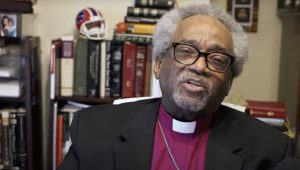 The virtual service was organized by the Rev. Maria Tjeltveit (Episcopal) and the Rev. Janel Rice, (Moravian), who co-chair the Moravian-Episcopal Coordinating committee. The service included comments and prayers from leaders of both denominations, along with music and examples of Moravian-Episcopal cooperation.

“I have been blessed to witness, work with and grow from the local Episcopalian connections that our church has made, particularly with my co-leader of the Moravian Episcopal Coordinating Committee,” said Rice during her opening comments. “What we have done – both in personal growth and congregational opportunities locally – is a model  and an example for what the full communion of our national Moravian and Episcopal churches is and can be.”

“As we celebrate tonight, we also acknowledge that we are in need of healing, not only from the pandemic, but even more from the racism that has characterized our country and our churches for far too long,” said Tjeltveit. “Therefore, our service includes a call to racial reconciliation with repentance and a commissioning, so that in full communion with one another, we can work together to build Christ’s kingdom, where all are welcomed and valued.”

The celebratory tone of the evening was tempered by the pandemic and by humble acknowledgments of racism, including 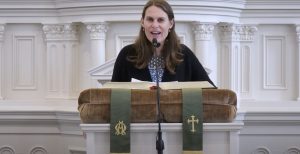 a litany of repentance and renewed mission.  Both churches have been working together on racial justice and healing efforts.

“In 2011, when the Moravian Church and the Episcopal Church entered into full communion, we celebrated the reconciliation between our denominations. Today, a decade later, God is calling us to heal a different, more difficult division,” said Episcopal House of Deputies President the Rev. Gay Clark Jennings. “As followers of Jesus in historically white denominations, we must redouble our commitment to work toward racial reconciliation by atoning for our participation in systemic racism and advocating for racial justice. We have much to offer one another on this journey to beloved community.”

An official Episcopal-Moravian dialogue began in 1997 and continued into the 2000s. In 2009, the Episcopal General Convention approved “Finding Our Delight in the Lord,” a proposal for full communion between the two churches. The Moravian Church approved the proposal in 2010 at its provincial synods. Churches in full communion do not need to agree on every doctrinal point, but are understood to have enough in common to worship together. 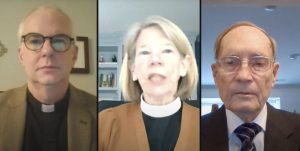 In practice, this means that members of both denominations can participate in the same sacraments, and clergy of one denomination can serve a congregation of the other denomination, which has happened in a few parishes so far. One church—St. Mark’s in Downey, California—is a combined parish “worshiping in the Episcopal and Moravian traditions.”

“Gathering at Central Moravian Church ten years ago to formally acknowledge our full communion relationship was one of my first official acts as the newly elected leader of the Northern Province,” said Miller. “I was awed at the significance and humility of bishops kneeling before one another in mutual love and respect as we pledged our commitment to follow Jesus Christ together. We proclaimed through our full communion agreement that, though we might express our faith in somewhat different ways, our shared faith in Jesus Christ as Lord and Savior was unchanging, strong and steadfast.

In his message during the service, the Rev. David Guthrie, Southern Province Provincial Elders’ Conference president, made an analogy to the North Star.  “Maybe that’s how it is with us – as individuals, as congregations, as sister communions and communities of faith, the one central enduring point around which we all orbit, to which we all are drawn, in which we all share is that constant love of God revealed in the person and work of Jesus Christ our Savior.”

The full tenth anniversary celebration can be viewed on Moravian.org. Special thanks to Egan Millard, an assistant editor and reporter for Episcopal News Service, for assistance with this article.