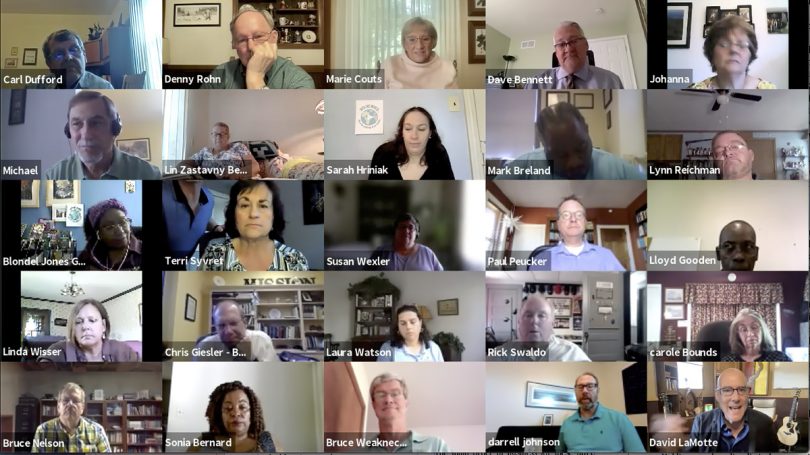 Along with many other aspects of church life, the districts of the Northern Province had to postpone their quadrennial synods. But this spring and early summer, one year later, they each were able to conduct the legislative business of the church, thanks to technology and flexible planning.

In April, May and June, the Western, Canadian and Eastern Districts held virtual synods, bringing together delegates for across each region in online sessions. While the in-person element of synods was lost due to holding them via Zoom, these district synods each completed the three key responsibilities they needed to perform: elect district leadership, elect members of various boards and commissions; and pass a budget for the coming year.

The synods used the now nearly-ubiquitous meeting platform Zoom to conduct the meetings. The Western and Eastern District synods also added a second platform called Lumi to provide a secure platform for elections and addressing synod.

Rick Santee, the provincial chancellor for the Moravian Church Northern Province, presided over the Western and Eastern District Synods from the Moravian Church Center conference room in Bethlehem. Rick would normally be “on location” for these events; travel restrictions and the virtual nature of these synods kept him home.

The Canadian District Synod, while still using the provincial technical set up, was chaired by Graham Kerslake. Graham pulled upon his experience with both district and provincial synods to lead the meeting.

Technical aspects of the meetings were handled by Northern Province staff. Mark Santore, IT manager, oversaw the effort, ensuring that everyone who participated was able to overcome technical issues and participate fully in this new way to doing synod. A team of provincial staffers from the finance and benefits offices served as front-line technical support.

The “business” of Synods

Each of the outgoing executive boards had agreed to stay on an additional year after having to cancel last year’s synods. The church is grateful for the continued efforts of Greg Weir, outgoing CDEB president, the Rev. Dave Bennett, who served as Eastern District president for 13 years, and the executive board members from each district who continued their service an extra year.

Also elected at each synod were district representatives to various interprovincial boards and agencies, along with district commissions and responsibilities (see chart for new elections).

Another key aspect of synods includes approving each district’s budget for the coming year. These first-year budgets serve as the blueprint for the coming intersynodal periods and provide insight into the financial positions of each district. All three synods approved their respective budgets.

Thanks to the Lumi computer meeting platform, elections and votes were efficient and quick. In past synods, elections were conducted using paper ballots, which were then collected and hand-counted. For the 2021 synods, voting was conducted electronically, with results tabulated instantly and easily shared. This is the first time the Northern Province has used an electronic voting system, although the Southern Province has been using a system like this for their past two synods.

Holding synods online limited opportunities for another important function of synod: To confirm and renew Christian love and fellowship. While these virtual synods lacked the in-person connection these events typically hold, the planners of each session worked in elements to build fellowship among the Moravians in attendance.

The Eastern District added another layer to their virtual synod by including live, online hosts. The Rev. Cynthia Geyer, Eastern District director of youth and young adult ministries, joined Tory Reid from John Hus Moravian in New York to serve as emcees for the synod. In this role, they introduced the different segments of synod and provide commentary on what was occurring (see the accompanying story).

Synods are also opportunities to review the work of the district. All three district synods included a “state of the church” address by their district presidents, along with a presentation on provincial matters from the Rev. Dr. Betsy Miller, president of the Northern Province PEC.

Two of the synods featured speakers to inspire and educate delegates. During the Western District Synod, Rev. Dr. Heather Vacek, now dean of Moravian Theological Seminary, reflected on how the Holy Spirit was at work in the District. Eastern District delegates heard an inspiring talk called “Worldchanging 101: The Downside of Hero Stories” from author, speaker and professional musician David LaMotte. In his talk, David discussed how heroic actions and long-term movements can lead to change. Delegates then had opportunities to break into smaller groups to share, discuss what they learned and bring questions back to the speakers.

Looking to the future

While the hope is for future synods to continue to be held in person, the efforts of synod planners and implementers in 2021 proved that despite limitations on meeting together, the work of district synods can still go on.

Planning is now underway for the 2022 synods of both the Northern and Southern Provinces. Current plans are to hold these sessions in-person, but it is uncertain if circumstances will allow.