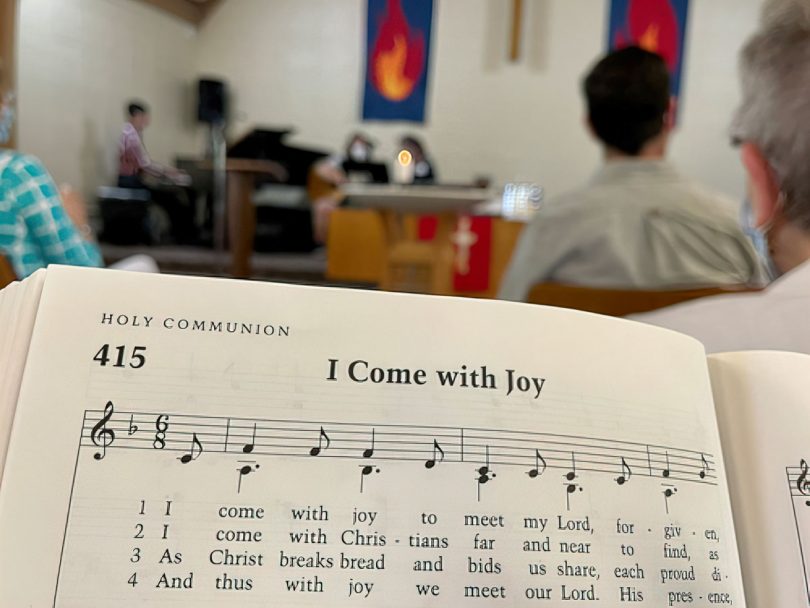 It was a midsummer Sunday and the often sparsely populated sanctuary at Lakeview Moravian Community Church on Tulane Avenue on Madison, Wisconsin’s east side was pretty much full with about 60 people present. It was not just the Moravians, though. The crowd included people from Zion Faith Community, a congregation of the Evangelical Lutheran Church in America (ELCA) which has been on the near East Side since 1890 – people who had just left their church building on Linden Avenue near the Barrymore Theater.

“I’m just so excited that we’re all here,” longtime Lakeview member Linda Shaw said near the beginning of the service. And near the end, Zion members Eric and Brenda Halverson stood up to lead the two congregations in Zion’s symbolic “here-is-the-church-here are the people” gesture. 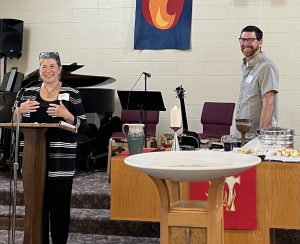 What was happening was the first Sunday of worshiping together for these two congregations as they launched new ways of being church by sharing space and collaborating in service to the community.
Each congregation will retain its identity and its financial structure, but together they now will be known as Common Grace. Their pastors – Rev. Pat Siegler from Zion and Rev. Staci Marrese-Wheeler from Lakeview – will be paid by their respective congregations and the move has the support of the leadership of both denominations.

The relationships between the two congregations have been built over several years.

“We have been doing things together for six years,” explained Siegler, referring to various service projects in the community as well as some joint online vespers last year. “We began to realize that we needed to change the way we do things. Being in our silos was not doing it any more. We could do better together.”

So how did this come to be and what does it look like now?

Zion had about 110 members, Lakeview about 85. A few years ago, Zion sold its gorgeous organ for about $70,000 and paid off the debt it had for its roof repair. There were staff cuts. The congregation had already committed to the idea that the people who were there were more important than the building, Siegler said.

Lakeview, founded in 1953, had moved in recent years to become a sort of community center, following the advice that the founding pastor, Milo Loppnow, gave to Marrese-Wheeler when she went to visit him as she began her pastorate in 2009. “Get to know your neighbors” he told her as he talked about the legacy of ecumenical work on Madison’s east side.

With the agreement of the Lakeview congregation, she began inviting neighborhood groups to use the space, including child care and theater group rehearsals. But the building was aging, repairs would be costly and there were limits on what could be done to make this a true community center.

The leaders of the two churches met in August of 2020 to discuss a path forward. They quickly agreed to the idea of Zion selling its building and the two congregations meeting at Lakeview, including having a joint worship service. The two congregations concurred at their annual meetings and the path was set.

When they had that first worship service together on July 11, the spirit of excitement was palpable; so was the care in finding ways to weave together two distinct traditions.

Some who could not be physically present joined the service on Zoom, so Marrese-Wheeler welcomed both “the roomies and the zoomies,” helping set a light tone that pervaded the day.
And when it came time for the sermon, Marrese-Wheeler wove the story of the connections between the Moravians – who trace their origins to the early 1400s – and the Lutherans – who trace their beginnings to the early 1500s. Both grew out of movements to reform the church, she noted.

“They were breaking down walls back then,” she said. “What we have done in the church is rebuild those walls.” With this project, she suggested, those walls are coming down, both literally and figuratively.

“We are not going to be constrained by this building or by any building,” she said. 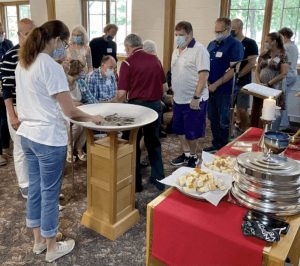 The pastors and congregations have partners as they plan their next steps. They are part of Awaken Dane, a two-year project working with a cohort of congregations to explore ways they can engage with their communities. They are also working with the Oikos Accelerator, which helps congregations find ways to use their property to further their ministry.

Siegler and Marrese-Wheeler know there are challenges ahead. As she said on that Sunday, “Why is it that we are one of the few doing this? Because it’s hard work.”

They talked about the challenges of finding the right way to worship together. Even though there was much joy on that first joint worship service, they know that familiar patterns from each congregation will need to be woven together, including differences in music, in the frequency of communion. “Neither group knew what liturgy looked like for the other,” Siegler noted.

Zion still has to sell its building – it has an offer, but there are issues to be worked out. The Lakeview building still needs repairs. Together they need to figure out the best ways to serve the neighborhood and to move from simply being a church building to a community center.

But together, they have broken down some of the walls that have kept congregations from collaborating and they are doing that hard work to create something new from the strengths each congregation has.

This article and photographs by Phil Haslanger, UCC pastor, were originally published by Collaboration Project (www.collaborationproject.us), a Madison, Wis.-based ministry group that exists to foster collaboration between churches for the good of the city and the flourishing of every person.