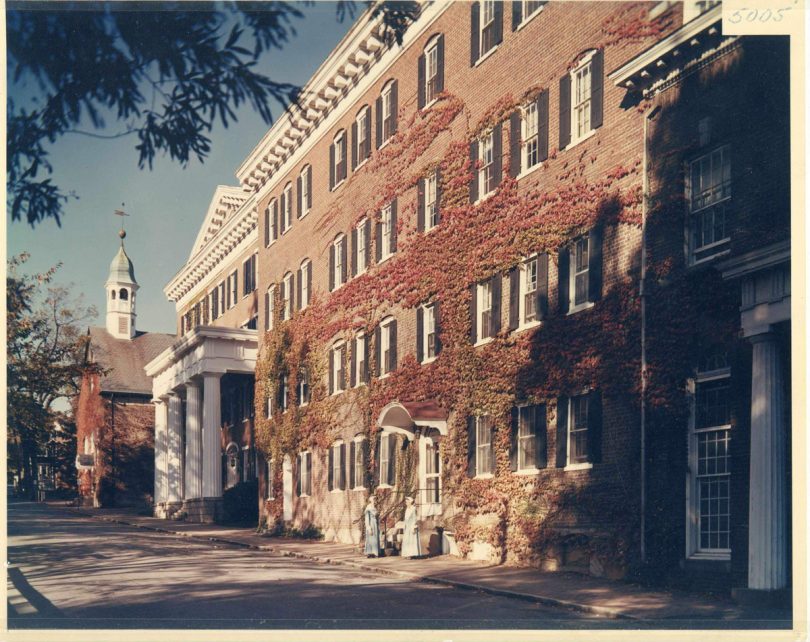 In the 2021-22 academic year, Salem Academy and College celebrates the 250th anniversary of its founding. In 1772, Salem Academy and College was founded on the revolutionary idea that girls and women deserve a rigorous education to prepare them to lead the way for a better world.   Over the last 250 years, Salem has built upon this foundation and pushed boundaries for women, empowering them to be leaders by preparing girls and women from all around the world to affect change, shatter expectations and lead through the challenges and triumphs of their times.

Throughout this school year, Salem will offer a variety of events to mark the occasion. This month, Michelle Hopkins Lawrence, co-chair of  The Anna Maria Samuel Project: Race, Remembrance and Reconciliation at Salem Academy and College, Salem Academy History Department, offers a history of the school and its Moravian Heritage.

Four years before the signing of the Declaration of Independence, Salem Academy and College began with a revolutionary idea that girls and women deserve an education. Salem is the oldest educational institution for both girls and women in the United States. Its origins lie in the little girls’ school in the town of Salem, North Carolina which was established by Moravian missionaries in 1766. Although no longer a part of the Moravian Church, the history of the school has been an integral part of the town of Salem. Remarkably, the school has always remained in operation even during wars and pandemics.

Today, the Academy and College share a 47-acre campus at its original location in the heart of Old Salem, part of the city of Winston-Salem. During its long history, the institution has developed into Salem Academy, a college preparatory school for girls in grades 9 through 12, Salem College, a liberal arts school for women, and The Fleer Center for adult education, as well as a graduate program open to men and women. 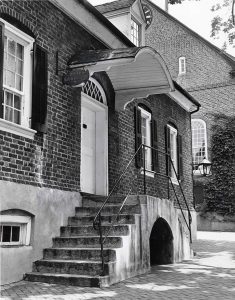 According to the research of Adelaide Fries, church records indicate that the founding of the school began with Traugott Bagge and Jacob Meyer, residents of Salem who made arrangements with Elisabeth Osterlein for the care of their young daughters in the spring of 1772. A school for boys had already been established in the town a year earlier. Oesterlein was one of the single sisters who had traveled in 1766 from Bethlehem, Pennsylvania to help grow the Moravian community in Wachovia. She taught her first class of little girls in Salem’s Gemeinhaus, which must have been crowded with the living quarters of the single sisters, the pastor and his family, and the meeting room for worship services.

From its beginning, the school was dedicated to female education. At a time when public education did not exist in most areas of the country even for boys, Moravians believed in the importance of educating all members of the church community. As the Moravian Bishop John Amos Comenius declared in the 17th century:

“No reason can be shown why the female sex…should be kept from a knowledge of languages and wisdom. For they are also human beings, an image of God, as we are …in their minds they are equally gifted to acquire wisdom.”

Comenius believed in universal education of all children regardless of gender or station in life. His ideas were revolutionary in the 17th century, as were the attitudes toward women’s education and work among the Moravians of the 18th century. Women, like Rebecca Protten, were even allowed to preach in some churches.

The success of the school and its reputation led to the decision by the governing board of the church and town of Salem to open admission to non-Moravian girls. On May 13, 1804, the first three students arrived even before the building to house the school was completed. Temporary arrangements were made for students to board with families and classes were held in the Gemeinhaus.

Governance of the school was under the control of the church. When the Boarding School was officially created in 1802, the governing board of the Southern Province selected Rev. Samuel Kramsch, then serving as the pastor of Hope in North Carolina, to lead the school as an “agent of the church.” Kramsch accepted the call to serve as inspector of the Boarding School, and for the next 147 years, every head of the school was a Moravian minister. Of the 22 men and women who have served as inspector, principal or president, the first 12 were ordained. Dr. Dale H. Gramley, who served from 1949 to 1971, was the first lay president.

School catalogs from the 19th century describe the school as “under the auspices and control of the Moravian Church” established “as a means of Christian usefulness.” In 1888, there were five institutions of higher learning in the United States which were the property of the Moravian Church. Many had their origins in the practical need for a boarding school for Moravian children whose parents were engaged in missionary work. Salem promised these parents to provide their daughters with a “solid education, healthy physical development, moral discipline and spiritual knowledge.” Students were expected to attend Moravian services and the school celebrated its own Festival Day each year with a special lovefeast.

One of the school’s early inspectors was Rev. Abraham Steiner who worked with the mission to the Cherokees at Spring Place in Georgia. After serving as inspector, he was called to missionary work at the separate congregation which was begun in 1822 for the free and enslaved African Americans in Salem. Today that congregation is known as St. Philips Moravian Church. 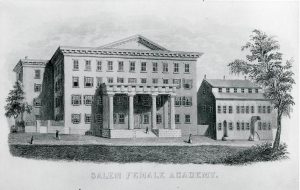 The inspectors’ wives served the school with their husbands and were listed in the catalogs of the 19th century with the title “Lady Principal.” Their daughters were usually enrolled at the school, and in keeping with a tradition that extends to alumnae of the late 18th century, they often became teachers at the school after graduation. For example, Abraham Steiner’s daughter, Maria Steiner Denke, entered the school in 1804 and taught at the school before her marriage. After the death of her husband, she returned to Salem to teach in 1848 until her own death in 1868 at the age of 75.

In addition to the Moravian leadership of the school, the church provided the physical plant of the institution. Until the completion of the Boarding School building, now known as South Hall, in 1805, the school was located in the Gemeinhaus. The success of the Boarding School led to a serious lack of space for pupils. At times in the early 1800s, the school leadership posted notices in newspapers in North Carolina beseeching parents not to send their daughters to Salem.  At times, students were housed in the former boys’ school building on the northwest corner of the Salem Square. They were even placed in the former Single Brothers House and in private homes. The shortage of space led the town to decided to demolish the Gemienhaus in 1854 so that a larger school building could be erected. Now known as Main Hall, this building contained classroom spaces, a dining hall, and dormitory with hot and cold running water and central heat.

Yet, the student body soon outgrew even these spacious accommodations. Eventually the Single Sisters House, which had been built in 1785 and had sheltered generations of  school’s teachers, was deeded to the school for use as a dormitory in 1910. Today it is the oldest building on the Academy and College campus.

The administrative separation of school and church began with the appointment of a separate board of trustees and the creation of a separate endowment in 1909. Until then, the Southern Provincial Elders Conference functioned as the school’s board of trustees and appointed the inspectors or presidents. The Moravian Church continued to have a strong presence on the board until recently. A large part of its membership was elected by the Southern Province Synod and/or appointed by the provincial elders until 2019. Currently, all trustees are elected by the Board of Salem Academy and College with the exception of the alumnae association presidents who are on the board in their official capacity.

The school catalogs contain a wealth of information about the history, students and teachers of Salem Academy and College. Thousands of young girls and women have been educated at Salem over the years. For many years, every girl who lived in Salem was educated in the school. Anyone can search the records through DigitalNC.org. Check it out. You may find a family member listed among the teachers and alumnae of the school.