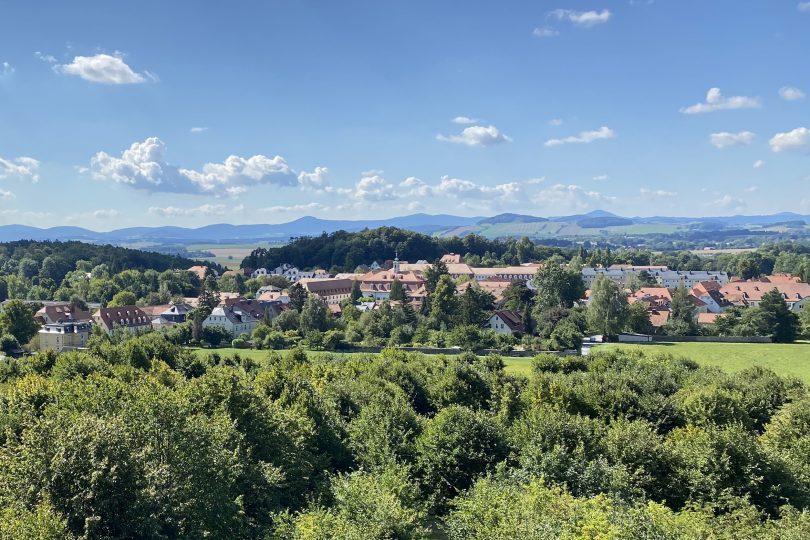 The year 2022 marks the 300th anniversary of the founding of Herrnhut, an event of significance not only for the local Herrnhut congregation but also for the Moravian Church as a whole.  Herrnhut, originally founded on the estate of Count Nicholas Ludwig von Zinzendorf in Saxony, Germany, is considered the “spiritual home” of today’s worldwide Moravian Church. 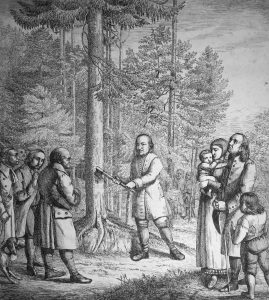 Generally, June 17, 1722, is considered the day when the building of Herrnhut was begun. On that day, Christian David felled the first tree for the construction of the first house. One hundred years later, this historic spot was marked with a stone monument, and ever since, June 17 has been celebrated with an outdoor worship service.

Preparations for the 300-year-anniversary started a few years ago with an invitation by the mayor of Herrnhut to a public meeting, where citizens could express their ideas and volunteer for committees. There was a wide variety of suggestions, ranging from music events to a prayer watch to a big parade. Unfortunately, the COVID pandemic caused a serious delay in the planning process, and even now we can’t know for sure that all items on the calendar of events will indeed take place. We’re hopeful, though, that it will be a great festival year, both for the town and the church community.

There are important events throughout the year, including a meeting of our provincial synod in March; the dedication of the newly restored church organ, May 13-17; a weeklong founding day celebration, June 11 to 19;  an International Youth Festival in August;  and a special day dedicated to Moravian Music on Nov. 13. Much of the renovation project of our church will be completed in 2022, so our sanctuary will present itself in a splendid new appearance, and newly installed digital technology will offer ways to share some of the program through internet and social media.

The Herrnhut Ethnological Museum will host a special anniversary exhibition that has been prepared in cooperation with the Unity Archives, the town museum and the Moravian congregation. With the help of generous government grants, the exhibition will offer a very professional presentation and interpretation of Herrnhut’s history and global impact, with a travelling exhibition planned for 2023.

The opening service for the festival week in June will be televised on the state broadcasting service. We hope that in this way, other congregations and Moravians worldwide will be able to share in this event. Finally, in November 2022, an official German commemorative coin will be issued with the Moravian Star as its motif.

All in all, the anniversary preparations have shown us two things: Herrnhut is a place full of fascinating history, reaching back all the way to the Czech reformation, and Herrnhut is a place full of connections, branching out to Moravian Communities in many parts of the world. We hope that—despite the impediments of the Corona-pandemic—next year’s festival will give us the opportunity to celebrate our history and our connection with brothers and sisters around the globe.

The Rev. Dr. Peter Vogt is co-pastor of the Herrnhut Moravian Congregation.