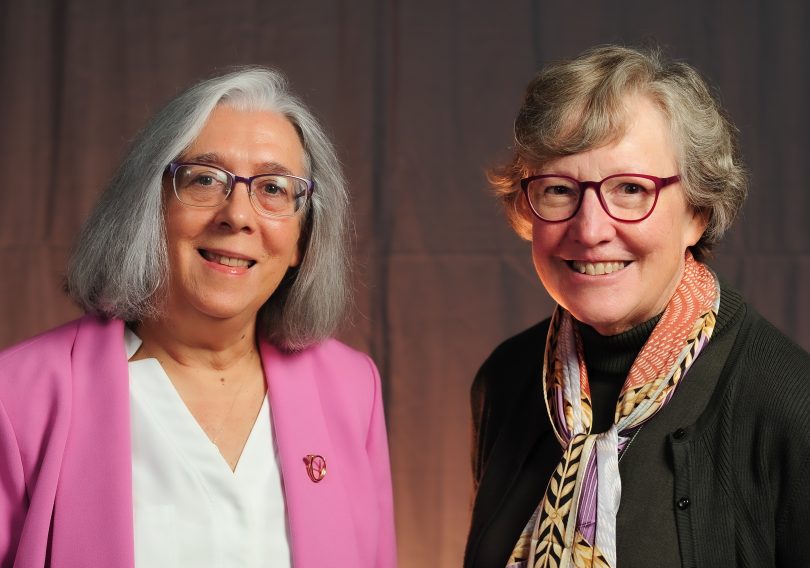 With deep appreciation for their long and faithful service, the Board of Trustees of the Moravian Music Foundation announces two staff retirements coming in 2022.

The Rev. Dr. Nola Reed Knouse, director, will retire August 31, 2022. She began her service at the Foundation as director of research and programs in June 1992, and became Director in March 1994. During her years, the Foundation has accomplished much to preserve and celebrate Moravian music, including microfilming the music holdings in Bethlehem and Winston-Salem (1996-1998); designing, building and occupying the Archie K. Davis Center housing the Moravian Archives (Southern Province) and Moravian Music Foundation (dedicated in September 2001); converting the library/archival card catalog to electronic records searchable world-wide; beginning a series of CD recordings, now being made available for streaming, of Moravian music; launching the Moravian Star Anthem Series, with over 100 Moravian anthems published, about one-third of which are by living Moravian composers; providing music editing services for the 1995 Moravian Book of Worship; publishing Moravian Chorales and Music, Volume 2—the “blue” band chorale books— along with Singing from the Heart and Sing to the Lord a New Song in collaboration with IBOC; holding annual “Music on the Mountain” Moravian Music Weekends at Laurel Ridge; assuming full responsibility and “ownership” of Moravian Music Festivals from the provinces; sponsoring the 3rd Unity Brass Festival in Winston-Salem (2018); establishing a permanent Bethlehem office for the Moravian Music Foundation; and creating and expanding a vital online presence.  To the extent that time allowed, Nola has continued scholarly work, editing and writing The Music of the Moravian Church in America (published 2008), and nearing completion of Preserving, Sharing, Celebrating: A History of the Moravian Music Foundation.

“All of these things could happen only with a great staff and a supportive Board of Trustees,” said Nola. “It takes a group of dedicated and gifted people to do things like these and MMF has been richly blessed in both the staff members and the Board. And our donors and friends – we can’t do it without you!”

Gwyneth Michel will also retire on August 31, 2022. She has served as Assistant Director (Bethlehem Office) since November of 2007. Arriving at MMF after 30 years in the music publishing industry, the Foundation has benefited greatly from her extensive skills and experience as a music editor and producer for all of the Foundation’s music publications and recordings. In addition, she has conducted the Unitas Chorale since 2012; presented a plethora of workshops in congregations and musical organizations; lectured and guided students at Moravian Theological Seminary, Moravian University, and Rollins College; and devoted countless hours to work on Moravian Music Festivals, the catalog-conversion project, and all of the Foundation’s other projects.

As the sole staff member in Bethlehem, she has gracefully managed a variety of administrative responsibilities there, and is the primary point of contact with the Moravian Archives (Northern Province).

She has represented MMF at many provincial and district synods, often being involved in worship planning and leadership. She spearheaded the denominational recording sessions in response to the COVID-19 crisis, producing a great many recordings available online for congregational use. She has also been quite active in the re-establishment of a children’s program in Moravian Music Festivals beginning in 2013, which was the first children’s program at a Festival since 1992.

“We congratulate Nola and Gwyn on the achievements of long and productive careers and wish them well as they transition to a well-deserved retirement,” said G. Randall Gibbs, president of the Moravian Music Foundation board. “We have been blessed by the work they have done and the direction they have set for the Foundation.

The Moravian Music Foundation, a 501 (c)(3) nonprofit chartered in 1956, receives about 4 percent of its annual operating support from the Moravian Church, Northern and Southern Provinces. The rest must come from individual donations, sales of publications and recordings, and income from investments. For more information about the Foundation, see www.MoravianMusic.org or contact either office: Winston-Salem, 336-725-0651; Bethlehem, 610-866-3340.