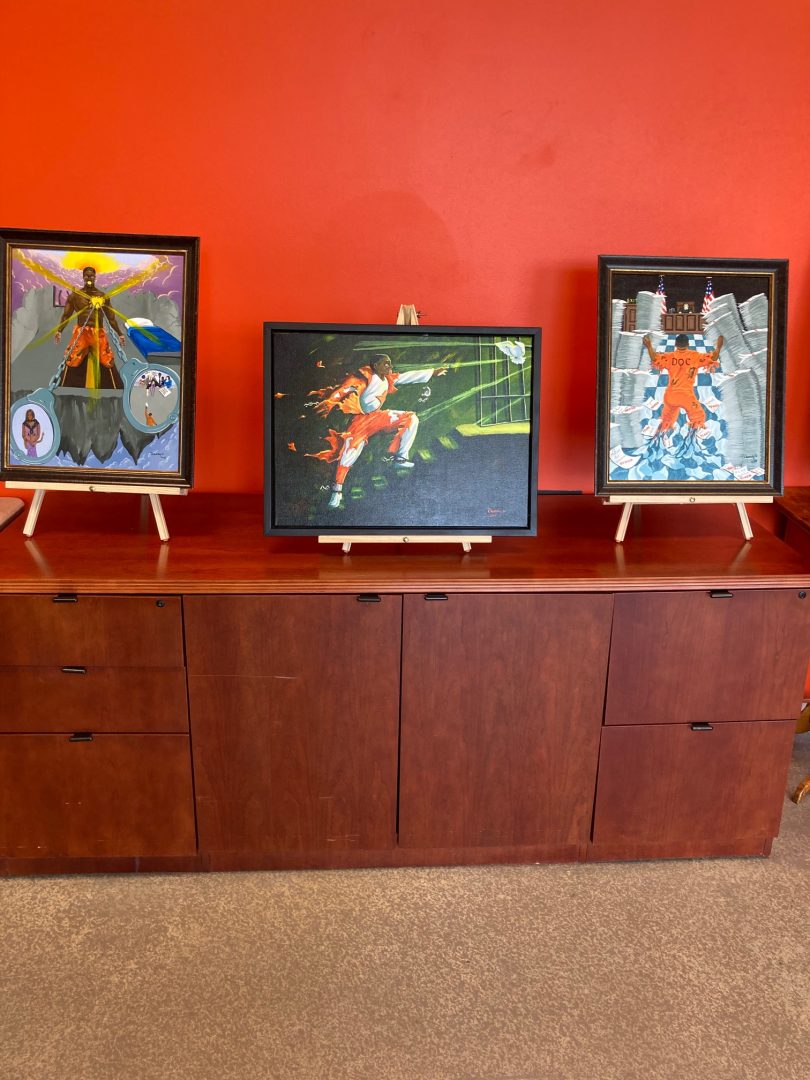 Last fall, the Rev. Mandy Mastros, pastor of Lancaster Moravian Church in Pennsylvania, partnered with her community to raise awareness of issues surrounding criminal justice by combining an exhibit of artwork by incarcerated individuals with an engaging series of criminal justice reform discussions.

The exhibit, produced by Art for Justice, built upon work started in 2018 with a similar effort in Bethlehem, Pa. This year’s effort added a series of four community discussions about issues in the criminal justice system attended by a broad variety of organizations and individuals.

At the 2016 Synod of the Moravian Church in North America, Eastern District, criminal justice reform was identified as an area of engagement for our churches and communities. Following Jesus’ commandment to see the presence of God in the incarcerated (Matthew 25:34-36), Moravians were encouraged to engage in the needs of those in prison and to critically consider questions of criminal justice reform.

Prisons are often difficult and daunting places to visit, and the Eastern District Church and Society Ministry Team asked themselves how they could engage in “visiting the prisoner.” They identified an engagement with art as a transformative way to see the humanity of the incarcerated and also be engaged in the needs for reforms.

In 2018-19, Church and Society partnered with Art for Justice (www.artforjustice.org), a local non-profit co-founded by Ann Marie Kirk and Charles Lawson, to bring the artwork of incarcerated individuals to the Banana Factory in Bethlehem, Pa., and engage in a series of presentations around issues of criminal justice reform. As the Art for Justice website states: “One of the ways that a prisoner, locked far from society behind layers of barricades, can communicate with the larger society, is through art. Art for Justice exhibits reach across deep divides in our society, reveal our shared humanity and stimulate dialog about how to achieve a functional, accessible system of justice for all.”

With some delays due to the global pandemic, this fall the ministry team was finally able to look at another area within our Eastern District to introduce another Art for Justice exhibit. In partnering with the Lancaster Moravian Church and the Rev. Mandy Mastros, an Art for Justice exhibit entitled “Paint, Prison, and Possibilities: Conversations About Justice, Incarcerated Artists’ Creations from Within” was brought to the Lancaster community. The artists whose work was on view during the exhibit included Charles Z. Lawson, Daniel Gwynn, Rene Ortiz, Eduard Ramirez and George Lopez.

However, the efforts of Art for Justice’s mission and artwork started even before the exhibit went public. As Ann Marie was installing the artwork, a man came in, waiting to see the pastor. He stopped at the piece “Out of Sugar Pills.” He looked at it for quite some time before saying the piece really grabbed his attention. When asked what it was about the painting that drew his interest, he said, “Well, that’s how Pastor Mandy found me yesterday, slumped over like that, sitting on a bench.”

The exhibit was open for almost two months in the Moravian Church Center of Lancaster and many individuals were able to reserve time to view the art. In addition to regular viewing and open houses, Pastor Mandy organized four panel discussions focused on Solitary Confinement, Reentry, Art as a Human Right and the Lancaster County Prison. Representatives from 17 organizations, returning citizens, survivors of solitary confinement, artists and advocates all participated in public and small group conversations.

In reflecting upon this exhibit, Pastor Mandy shared, “One of the most meaningful parts of the Art For Justice Exhibit was the interaction I was able to have with so many individuals from this community who are passionate about issues of criminal justice and/or who have been impacted by the criminal justice system in some way. The people who came to see the art were often in awe of the talent and raw emotion they saw in the pieces. It was a blessing for me to be able to come into my office each day for eight weeks and be surrounded by the artwork and the stories that work conveys. It deepened my passion for the work that we do here to increase the awareness of our shared humanity.  I am so grateful to Ann Marie and to Art for Justice for working with us to bring the art, the increased awareness and the call to do more to Lancaster County.”

Since this exhibit ended, the visitor who had been moved by his pre-exhibit viewing entered rehab for an alcohol addiction and he has reached out periodically to share his success. He is now in a half-way house, is working, has a deepening relationship with his children and grandchildren, and is doing very well. Indeed, there are many possibilities as artwork opens our eyes to new potentials, both for the incarcerated and for us as well!

Please share with friends and find ways to advocate for the humane treatment of the incarcerated and the necessary reforms in our criminal justice system.

To view a  Youtube video of the exhibit featuring both Ann Marie Kirk, co-founder of Art for Justice and the Rev. Mandy Mastros of the Moravian Center of Lancaster, see this article on www.moravian.org

The Rev. Janel Rice is pastor of Calvary Moravian Church in Allentown and has served the Eastern District Church and Society Ministry Team.