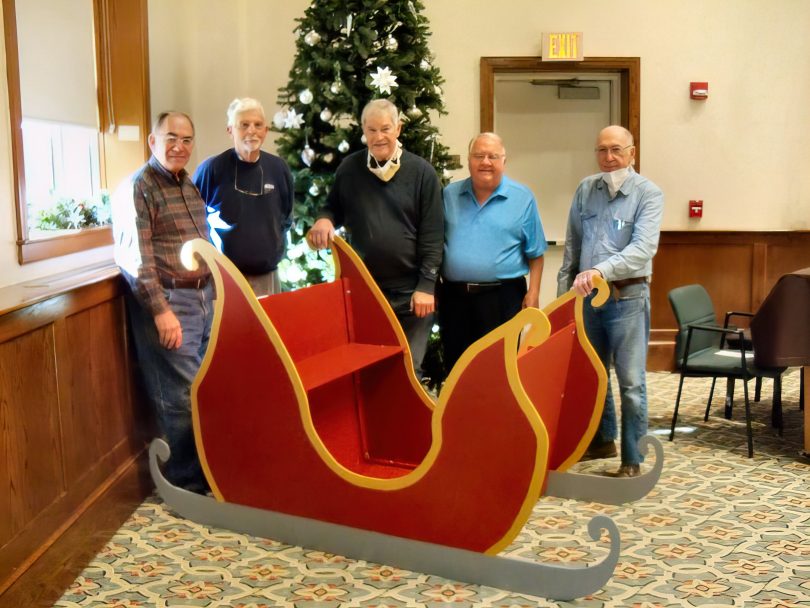 It all began some twenty years ago when Jim Forkner and his wife, members of Fairview Moravian Church in Winston-Salem, decided to move to Salemtowne. Jim asked if he could bring his entire woodworking shop with them. Salemtowne agreed and provided a room in the basement of Bahnson Hall.

While his wife Margaret was still unpacking cartons in their new cottage, Jim was busy setting up his “dream” retirement woodworking shop, complete with multiple drawers of nuts, bolts and fasteners. Thus, the woodworking shop was born, and has since been expanded to two rooms with multiple pieces of equipment.

Through the years, many pieces of broken or marred furniture have been brought to this shop by residents for repair and refurbishment; the residents then welcomed these pieces home a few days later and were thrilled by their “new” appearance. Jim Forkner was a genius with matching stains and paints! Sadly, he passed away about three years ago, but the new denizens of the shop chose to dedicate the Woodworking Shop to Jim Forkner’s memory.

Today, the Salemtowne Woodworking Shop buzzes with the sounds of at least five or six resident woodworkers plying their dream retirement trades: furniture building and repair, carving and turning. Lathes whirr and turn, and saws and planers make loud noises! These men do this because they love doing it. They do not charge residents for repairs, and many items made in the workshop are donated to and sold in the Salemtowne Community Center Gift Shop. Profits from the gift shop go to the Independent Resident Council, and are used for the benefit of residents, i.e., the Residents Assistance Fund, which provides support to residents who outlive their financial wherewithal. 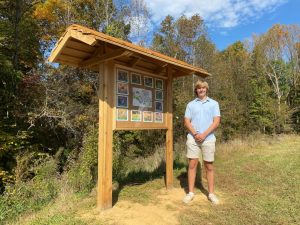 Last fall, two of the woodworkers (Jerry McKenzie and Jim Yarbrough) assisted a Boy Scout with his Eagle Scout project, by using the power tools in the woodworking shop to shape the pieces of an information kiosk which the Scout and his parents then helped install near the deck at the lake on the Salemtowne campus. The Scout had made this his Eagle Scout project, and placed a plaque on the Kiosk in honor of his neighbors who were very influential in his growing up and had since moved to Salemtowne.

And during the 2020 holiday season, five of the men designed and built a very large sleigh, a lá the 1800s, to hold decorated empty boxes and a small live Christmas tree. The sleigh was placed in front of a very tall decorated tree in the Saal, the main meeting place for the residents of Salemtowne. These five men donated many hours and lots of life’s expertise. After placement in the Saal, the sleigh was dedicated to Tom Hamilton, a very active woodworker, now deceased.  In case you’re wondering, all the woodworkers still have all their fingers!

What started as one man’s dream retirement hobby has morphed into a many-man, two-room, very busy woodworking shop, which has attracted and brought many of these men and their wives to Salemtowne for their retirement years.

Jim and Zena Yarbrough are members of Home Moravian Church in Winston-Salem, N.C.