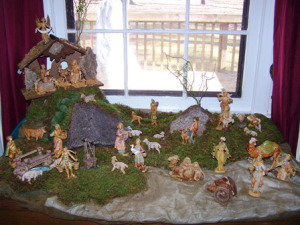 This post has been republished for the Moravian Roots and Wings blog. Visit MoravianFamily.WordPress.com to see this and other posts for nurturing spiritually healthy families in today’s world.

It can be as simple as you like, it can be as elaborate as you like. The main thing is that the Putz tells the holy story of our dear Savior’s Birth long ago. There are Putzes that fill whole rooms and have many different scenes depicting the events of Our Lord’s Incarnation, the Prophet Isaiah or John the Baptist, the Angel Gabriel and the Virgin Mary, the Ascent to Bethlehem, the Stable, the Shepherds and so on. A Putz can be as simple as figures of the Blessed Virgin, Joseph, the Baby Jesus, and the Ox and the Ass in a simple stable made of twigs.

The main thing is to “tell the old, old story of Jesus and His love” as the hymn says. The Ox and the Ass are there, not as you might think because Jesus was born in a barn, rather they are there because they are

Putzes are often displayed in Moravian churches and even private homes, like this one.

the first witnesses of our Lord’s birth. Isaiah the Prophet tells us (1:3) “‘The Ox knows its master and the Ass knows its owner’s manger, but My People does not know Me,’ says the Lord of Hosts.” Even they recognized the word made flesh. The Putz is a wonderful educational tool to help us do the same. What a wonderful opportunity the Putz gives us to “tell the old, old story”, to share it with our family and friends.

Bishop Kenneth Hamilton, who ordained me many long years ago, once said “The Baby Jesus is the center of every Putz.” And so He must be. The Putz also helps us keep Jesus at the Center of our Christmas celebration. Long ago Bishop Hennig Schlimm of Germany was trying to explain my Koenigsfeld Putz to some German visitors there. “In the American Moravian Church,” he said, “the Putz is as important as the Christmas Tree.” I wish it had been true then, I wish even more that it was true now. We need even more to put Jesus in the center of our Christmas celebrations.

Necessity Being the Mother of Invention

I can’t recall ever not having Nativity Scenes, “Manger Scenes” we called them when I was growing up.  My Pennsylvania German grandmother always had a wonderful Manger Scene and garden under her Christmas Tree.  It was so enticing, so beautiful, that in my childlike enthusiasm I just had to play with it.  I recall many occasions when I was pulled feet first out from under the Christmas Tree when I had crawled under there to play with the lovely plaster figures.   Swift was the retribution that fell upon me then when one bright December afternoon I carried the Three Kings outside to play with them at the side of the road.  In her wisdom, my grandmother decided to buy me a Manger Scene I could play with.  And I have been playing with them ever since.

The old Gospel hymn “I love to tell the Story” might well have been written for me. Beginning with those plastic figures I have been building Nativity Scenes everywhere I have been in order to tell that “old, old Story.” I was fortunate to have grown up in the Moravian Church with its rich “Putz” building tradition and I have received encouragement from that tradition during my whole career.  As little children, we were taken each year to view the wonderful, elaborate Putz in the Brethren’s House in Old Salem.  What wonder filled our eyes as the individual scenes lit up and the story of Jesus and His love unfolded before us.   As a student in Bethlehem, Pennsylvania, I built the Putz at the Moravian College and Theological Seminary.  I also began at every opportunity to collect figures of my own so that I could tell the old Story in my own parsonage after my ordination.  For example, in a truck rest stop cum diner in Shartlesville, Pennsylvania, I acquired a set of porcelain figures of the Flight into Egypt.  I admired it for a couple years as I drove back and forth to North Carolina and finally, one day asked the price. “$27.00” was the answer, no small sum to a starving theological student at the time, but still a bargain, when I found that it had been made by Goebel, as in Hummel Figures.

So my collection grew and grew, and when I moved into my new parsonage in my first parish in the Blue Ridge Mountains of southwestern Virginia, I was able to build a very respectable Putz that included several scenes from the Gospel narrative of Our Dear Lord’s Incarnation.  Serving a parish in the Black Forest of West Germany also provided me with the opportunity to collect more figures and to build my Putz there.  A colleague of mine in North Carolina was a licensed electrician and he made a switch box for me so that I could illumine the individual scenes of the Putz, 18 scenes by now, as a taped narration retold the “old, old Story.”

By the time I was doing my doctoral work in St. Louis the Putz had grown so that it easily filled a platform that was 9’ x 16’, including five illuminated Christmas Trees and over 300 figures plus all the moss my longsuffering wife and dear children could gather, assisted by some of my students.  The Putz was always open to the public, in the museum where I was curator and later in a series of churches. There we collected money for a ministry to the homeless (“because the Baby Jesus was homeless too”) and often collected thousands of dollars for them from the thousands of visitors who came to see it.

One of the most lovely displays was in front of the chapel altar of a nearby UCC church.  The five Christmas Trees, the Putz itself, spilling down the altar steps, it was really so lovely, that when one of the church members died his widow asked if they could have his funeral in the chapel in front of the Putz.  My Putz was a Nativity Scene with a thyroid condition.  It just kept getting bigger and bigger. Unfortunately, the 3 churches where it was displayed ran out of storage space and needed the display space for other things.

Having spent most of my life in old parsonages, there had always been a spare room in the house where I could build my Putz.  Now, however, I live in a small bungalow in South St. Louis, where I joke that “bungalow” is the Algonquin Indian word for “not enough space.”  For a couple years I built the Putz in my study and in my woodcarving shop, but this meant that either my books –a necessity for a preacher—or my woodcarving tools—a necessity for me—were out of reach for the entire Advent and Christmas Seasons.  This was inconvenient and ultimately unacceptable.

I have been a member of both the Bavarian and Austrian Krippenfreunde Nativity Scene societies for decades, having discovered them while in Grad School.  I read their beautiful magazines ravenously when they arrive and have garnered many ideas for building my Putz from them. (Ask me about turning a “Flight into Egypt” –not the Hummel one—into an “Ascent to Bethlehem”, complete with pregnant Blessed Virgin.  I got the idea from the Krippenfreunden).

Thus it was that as I cast around for a way to build the Putz in my very limited space in my little bungalow, I revisited the Krippenfreund concept of what in German is called the Kastenkrippe, the Box Creche, or as I like to call it a “Putz in a Box.”   I acquired a DVD shelf with adjustable shelves and determined how many of my scenes from the Incarnation Story I could display and set to work. Now instead of being 16’ x 9’ it sits in a small niche in the living room.

I painted the background royal blue and spangled it with stars.  I had to dispense with my 5 Christmas Trees and illuminated narration and all of my auxiliary figures but continued determined to tell the “Old, Old Story.” I outlined the shelves with greenery and put little lights in that.

I put my Heavenly Host on top of the shelf, surrounded by my little German villages and arranged the scenes in sequence in the shelves, beginning with my Narrator,” St. John the Baptist as the Voice in the Wilderness.  The central scene, the Lord’s Birth in the Stable, has pride of place in the center shelf in the largest opening.  The bishop who ordained me once told me, “The Baby Jesus is the Center of every Putz.” And so He is in mine.

I have been delighted with my “Putz in a Box”. Necessity is indeed the mother of invention, or as we say in German, “you can make a virtue out of necessity”. Certainly, I miss the moss gathering and the Christmas trees, the taped narration and the crowds of visitors, but even if this solution to my lack of space is not the ideal incarnation of my Putz, it is still a pretty darned good one.  The main thing is to be able “to tell the Old, Old Story of Jesus and His Love.”

(Editor’s Note: The Moravian putz, pronounced “puts,” is a miniature nativity scene. The word comes from the German word “putzen,” meaning “to decorate.” For more information about putzes, check out this Victorian Christmas site, or read about putz displays at Central Moravian Church and First Moravian Church in Greensboro, NC.  Accounts differ as to the origins of the Putz.)

Pastor Roy Ledbetter is a retired Moravian pastor. He has served parishes in Virginia, North Carolina, Germany, and Missouri. A writer and editor, he raises blackberries for pies, is an avid woodcarver and Putz builder and does volunteer translating for the Moravian Archives in Herrnhut, Bethlehem and Salem.

I will make with you an everlasting covenant. Isaiah 55:3

Now may the God of peace, who brought back from the dead our Lord Jesus, the great shepherd of the sheep, by the blood of the eternal covenant, make you complete in everything good so that you may do his will, working among us that which is pleasing in his sight. Hebrews 13:20-21

God, thank you for your gift of Jesus Christ, who came to save us all. You gave us the promise of eternal life if we believe and follow your word. Amen.