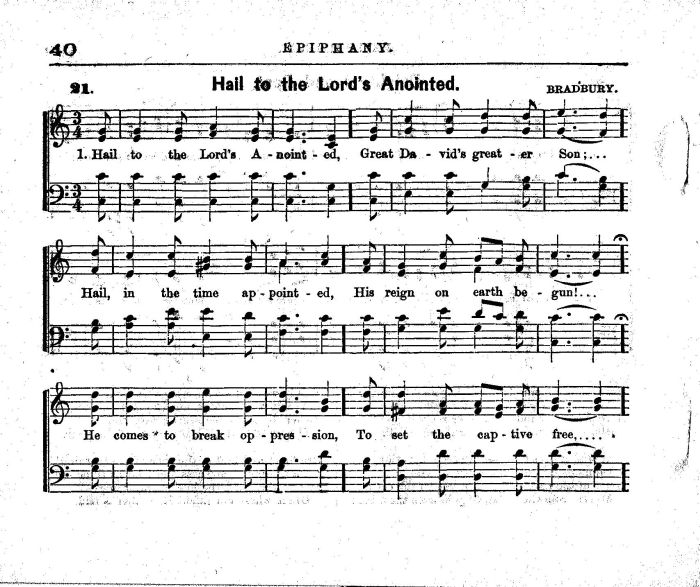 The following was delivered as a reflection on an Advent hymn during the Moravian Ministry Association’s worship service for Advent on December 6, 2012:

The hymn for reflection today was written by James Montgomery.  – Born November 4, 1771 in Scotland.  – Son of Irish parents.  – Father, a Moravian pastor.  When the Savior called his parents to serve enslaved Africans in the West Indies, they placed James in the care of a Moravian school in Fulneck, England.   His parents never returned, yellow fever claiming the life of his father in Barbados, his mother’s death occurring in Tobago a year earlier.

Montgomery floundered through his adolescent years.  His creativity and passion for poetry were somewhat overlooked in the academy, and the school sent him to a bakery to serve as an apprentice.  At the age of fifteen, Montgomery ran away from this work and the Moravians.  For several years, he bounced around from job to job, often unemployed, and living on the streets for weeks at a time.

At the age of 23, he discovered his vocation as an editor and then the owner of a radical newspaper in Sheffield, England.  He was thrown in jail for printing a poem celebrating the Storming of the Bastille in Paris.  A second time, Montgomery was jailed for reporting the police brutality used to suppress a local riot.  Each time after his release, he returned to his calling as a leading social critic and advocate for the poor and defenseless.  Today he is remembered for his passionate opposition to the practice of child labor and his persistent protest within the English abolitionist movement.

As Montgomery matured as an editor, a poet, a hymn writer, and a Moravian, he drew his ink from the well of the Jesus’ life and mission.  In him, he discovered a Risen Savior who empowered the Church with his active presence.  Following Jesus as Lord, the roots of his activism and hymn writing extended deep into the prophetic movement the Master led from Galilee to Jerusalem.

I never thought I’d travel to Galilee.  By God’s grace and generous grant money however, I found myself there two summers ago on a pilgrimage with twenty mid-career pastors sponsored by Wake Divinity School.  We walked where Jesus walked.  Prayed where Jesus prayed.  And dipped our toes in the waters that gave birth to the Movement that inspired the activism of James Montgomery.

Quite a few stories are out there about pastors and pilgrims pulled from the line to be interrogated, sometimes for an hour or more.   We all made it through the questioning, but then came the baggage screening.  I lifted my bag onto the conveyor belt, and watched it passed through the scanner.  It was tagged with a yellow sticker.  An officer said: You’ll have to take your bag over to that counter.

Oh my… What could it be?  I hoped it might be the CPAP I use for my sleep apnea.  It’s tripped security before.  I just didn’t want to be interrogated for the next couple of hours or whatever else my imagination said they might do.  So I stepped up to the counter a bit anxious, where I was greeted by a young woman with a very pleasant smile.

She asked me if I was carrying a large stone in my luggage.  The stone!  Ah yes!  It was the stone.  In my bag I had packed a stone.  — A stone about the size of hand grenade.  I told the officer I had picked up a stone from the shoreline of the Sea of Galilee.  It was a stone I was bringing home from Capernaum.  That’s what set off the machine.  She smiled, and said: Okay.  Then she pleasantly said I could proceed to the line, where I would check my bag to Atlanta.

It was the stone.  The stone.  And on the way home I got to thinking about that stone.  – A stone carried home to help me remember the place where it all began.   -The place by the Sea of Galilee where Jesus began to build his kingdom movement.   I began thinking about how that stone represents something much more dangerous to the powers and principalities of the world than even… even a hand grenade.  For as God’s peaceful kingdom unfolds, it is led by One who continues to come to break oppression, to set the captive free, to take away transgression and rule in equity.

At the age of forty-two, James Montgomery returned to the Moravian Church. Then eight years later in 1821, he offered a new hymn for a great Moravian Christmas Day gathering.   – A hymn inspiring his church even today:

Hail to the Lord’s Anointed, great David’s greater Son!
Hail in the time appointed, his reign on earth begun!
He comes to break oppression, to set the captive free;
to take away transgression, and rule in equity.

He comes with succor speedy to those who suffer wrong;
to help the poor and needy, and bid the weak be strong;
to give them songs for sighing, their darkness turn to light,
whose souls, condemned and dying, are precious in his sight. 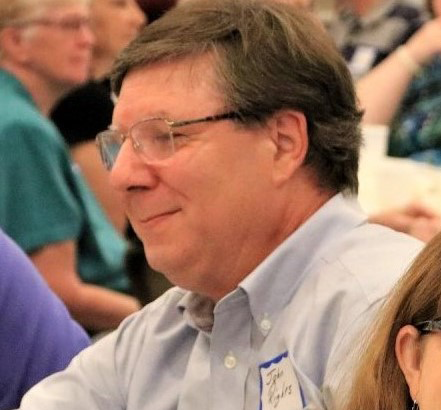 The Rev. John D. Rights is pastor of Konnoak Hills Moravian Church in Winston-Salem, NC.  They will hold Christmas Eve Lovefeast services on Monday, December 24 at 4:00pm and 7:00pm. Nursery is provided and there is a 30-minute band prelude prior to each service.

I will make with you an everlasting covenant. Isaiah 55:3

Now may the God of peace, who brought back from the dead our Lord Jesus, the great shepherd of the sheep, by the blood of the eternal covenant, make you complete in everything good so that you may do his will, working among us that which is pleasing in his sight. Hebrews 13:20-21

God, thank you for your gift of Jesus Christ, who came to save us all. You gave us the promise of eternal life if we believe and follow your word. Amen.