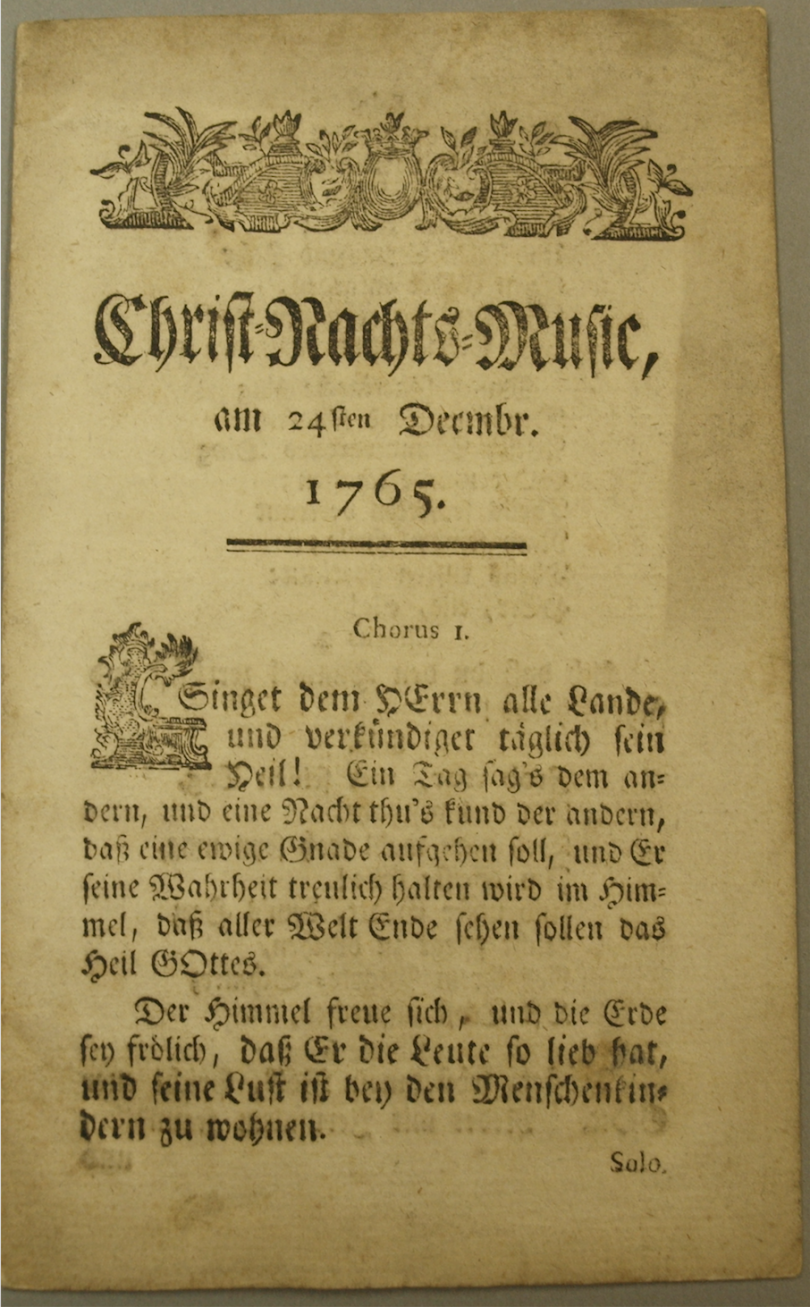 Just a few months after the Moravian village of Lititz, Pennsylvania, was founded and named in 1756, the small group of brothers and sisters living in the Pilgerhaus celebrated Christmas Eve by holding a Lovefeast.  From that humble beginning has evolved an elaborate worship service beloved by all who participate and attend.  The congregation presents the service six times each year during the weeks before Christmas, regarding it as a gift to the community.

More than thirty odes designated for Christmas Eve can be found in the church archives.  The earliest, dated 1765, is an eight-page printed folder detailing portions to be sung by two different choirs, soloists, children, and congregation. It surely reflects the work of Brother Bernard Adam Grube, who had arrived in May of that year.  Besides being a fine pastor for the small community, Brother Grube was a gifted musician under whose direction music programs in Lititz were greatly expanded.

The children were given an increasing role in the service as the years went on, and it was the children who, in 1792, sang for the first time in English.  Sixteen odes exist from the first thirty years of records, and twenty-three more from 1797 through 1892.  New hymns and anthems were added with each revision and others were set aside, while favorites were retained from one ode to the next.  By the end of the 19th century the Vigil Service as we know it today was taking shape.

Within another twenty years, the content and flow of the present-day service was complete. The last significant change to the texts came with the introduction in 1944 of a Christmas stanza for “Sing Hallelujah,” written for the Lititz congregation by the Rev. Louis Huebener, who was at the time an Elder and choir member. While prelude and other incidental music changes from year to year, those attending a Vigil Service in 2019 will participate in essentially the same worship experience that their ancestors did a century ago.

“Be filled with the Spirit, as you sing psalms and hymns and spiritual songs among yourselves, singing and making melody to the Lord in your hearts.” Ephesians 5:18b – 19

And now, our God, we give thanks to you and praise your glorious name. 1 Chronicles 29:13

Give thanks to God the Father at all times and for everything in the name of our Lord Jesus Christ. Ephesians 5:20