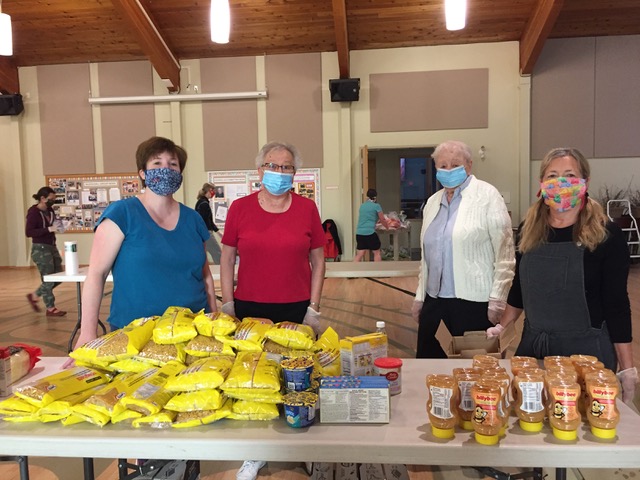 The community immediately north of Christ Church in Calgary has been flagged by the City of Calgary as one that contains a large number of vulnerable residents. Recognizing that food insecurity is a real issue for its neighbors, Christ Church was instrumental in forming a neighborhood food pantry in April 2019. Working alongside two other churches in the area, United and Lutheran, as well as local residents and community services providers, Christ Church has been a major supporter of this pantry through both volunteers and funding.

When COVID-19 concerns became an issue mid-March, we questioned whether or not the pantry would be able to continue, with many of its regular volunteers being at risk and needing to step away. But the need for food in our community only intensified as job loss became a reality and government subsidies were slow in coming. In faith, it was decided to move ahead, and God provided. Volunteers from the community who were furloughed from their work stepped forward to help. Instead of the usual monthly self-serve process, the pantry moved to provide pre-packed hampers twice a month. Self-distancing and sanitation measures were put in place. One of the churches ran a special fund-raising campaign allowing for the purchase of extra food items to meet increased demand. Christ Church applied for and received a grant of $9,500 in Real Canadian Superstore gift cards to pass out to patrons, $100 for families of 3 or more, and $50 for couples and singles.

On June 16, the pantry provided free food for 41 households consisting of 50 children, 6 seniors, and 64 adults. It is truly blessed to be a blessing.

We will tell to the coming generation the glorious deeds of the Lord, and his might, and the wonders that he has done. Psalm 78:4

No one after lighting a lamp puts it under the bushel basket, but on the lampstand, and it gives light to all in the house. Matthew 5:15

Light of the world, we thank you for the opportunity to tell the rising generation about your deeds, love, and grace. May we reflect your light wherever we go. Amen.