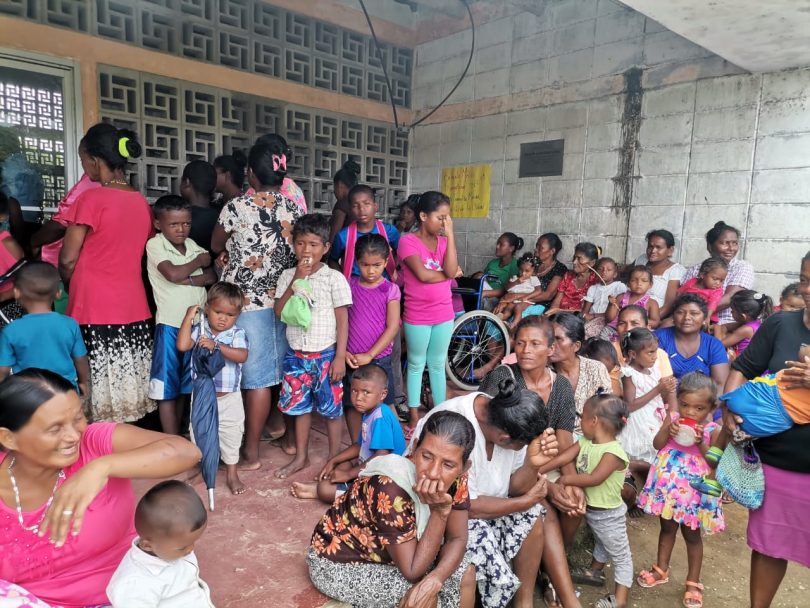 The following was written by Rick Nelson to serve as an update to our board.

The Board of World Mission (BWM) of the Moravian Church, through its Moravian Disaster Response (MDR)Program, has been active since early November in sending humanitarian assistance to Moravian sisters and brothers in Nicaragua and Honduras.

In Nicaragua, BWM and MDR have helped to coordinate assistance from Habitat for Humanity in the form of water purification and hygiene kits flown to the East Coast by Mission Aviation Fellowship (MAF).  We were also granted $10,000 by Samaritan’s Purse to purchase well cleaning equipment.  Nevertheless, the main thrust of assistance to our Nicaraguan partners has been financial.

Issues with reporting have led to increasingly frustrated emails between Galvis Nicho, who has been the main contact for that portion of our relief efforts, and Habitat for Humanity. Recently, Brother Nicho has been quite sick following a trip to Karawala Sur.  As a result, reporting has been delayed for several weeks.  Nicho recently let me know that he hopes to be able to follow up in early March.

In Honduras, most of our efforts have faced significant delays.  However, just within the last week, several projects have finally seen some success. 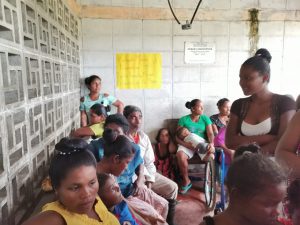 Medicines purchased with a $10,000 grant from Samaritan’s Purse, were sent to Ahuas early in February.  They were divided between the Unity and Mission provinces of the Honduran Moravian Church.

In an effort to distribute these donations, the Unity Province arranged for a trip to the communities of Auka, Lisangni Pura, and surrounding villages.  With MDR funds, church leaders covered the cost of transportation to the area near the Nicaraguan border.  The Secretary of Health in Puerto Lempira agreed to send doctors and nurses along with the Moravian leaders. Together they held clinics in the various communities and distributed the medicines.  Over 200 patients were seen in four villages before the medicines ran out.  The Secretary of Health would not have been able to make these visits were it not for the cooperation of the Moravians.  The Moravians could not have distributed the medicines without the assistance of the medical professionals provided by the Secretary of Health.

The President of the Unity Moravian Province, Reverend Raby Becam, and other pastors assisted with coordination of the clinics and also led devotions at each place.  In one village, the efforts of the Moravian leaders led to plans to build a church and pastor’s house so that a pastor could be sent.

The Honduran Mission Province has decided to hold its medicines at the Provincial Office in Ahuas until the other shipments of humanitarian aid arrive, hoping to be able to distribute all materials at one time to the hurricane/flood victims.  They are also hoping to wait for the arrival of the Mission Aviation Fellowship (MAF) funded plane being sent by AGAPE from Guatemala on March 1st or 2nd to assist with distribution.

An additional amount of $10,000 was sent from the Reformed Church in America (RCA) for the purchase of medicine.  The Moravian hospital in Ahuas, or Clínica Evangélica Morava, is in the process of purchasing those medicines which will again be divided between the two Moravian Provinces for distribution to hurricane flood victims.  We are hopeful that those purchases will arrive in La Mosquitia during the first or second week of March. 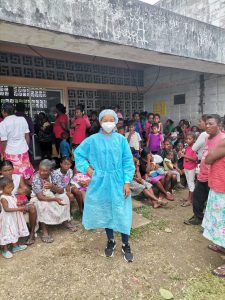 After delays of almost two months, we were finally able to arrange for transportation of 400 boxes of food aid donated by Feed the Hungry in Progreso.  The pre-packaged meals had been promised by Carlos Saavedra of Feed the Hungry early in the year.  However, as is so often the case with transportation to La Mosquita, bad weather, mechanical issues with the major maritime carrier’s boat and lack of alternative transportation prevented its shipment until the last week of February.  The World Food Program had agreed to cover shipping to Puerto Lempira, but it was finally decided to work with an Ahuas merchant to truck the 36-pound boxes from Progreso to Batalla and from there ship them by boat across lagoons, through canals and upriver to Paptalaya where they were loaded on the hospital’s tractor for the ride to the clinic in Ahuas.

Of the total of 400 boxes, 125 were destined for Feed the Hungry’s children’s feeding program in Brus Laguna; another 125 for an identical program in Ahuas; 75 for distribution to hurricane/flood victims by the Unity Moravian Province; and, 75 for the Mission Province for the same purpose.  The Unity Province has already sent part of its allotment to Brus Laguna and the North Coast.  AGAPE will help to fly the 125 boxes for the children’s feeding program in Brus Laguna, while the 125 boxes for the children in Ahuas have already been delivered.  The Mission Province, with help from AGAPE, will distribute the 75 boxes to villages it has selected as priorities. 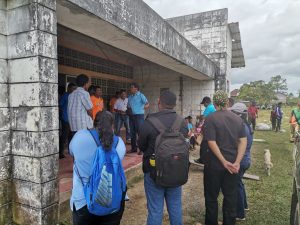 In the month of November, Honduras Habitat for Humanity promised emergency housing kits from the organization, Shelter Box.  However, shipment from Shelter Box’s warehouse in Panama was delayed for two months.  When they arrived at Habitat’s facilities in San Pedro Sula in late January, the World Food Program agreed to assist with transportation to La Mosquitia.  The same transportation barriers that hindered our movement of the food assistance also delayed the arrival of the kits.  They were finally sent on February 27th and should be in Puerto Lempira by March 1st.

The kits contain mosquito netting, water filters, large heavy-duty tarps, lamps, kitchen utensils, blankets, and tools.  Members of the provincial boards of both Moravian provinces participated in a training held via WhatsApp by Habitat on February 26th. Those same leaders will provide training to the recipients of the kits as they are distributed between the municipalities of Brus Laguna, Ahuas, Puerto Lempira, and Villeda Morales. 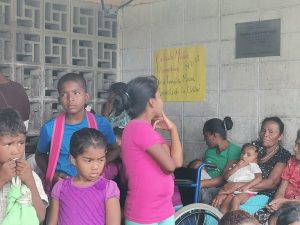 AGAPE, the Guatemalan-based Christian aviation organization, has agreed to again help us with distribution of relief supplies.  With $10,000 in financial assistance from MAF, they hope to fly a total of 28 hours delivering the above-described aid.  They are hopeful that Moravian leaders will assist with additional financing should there be a need for the purchase of additional fuel.  Pilot Ludin Reyes plans to be in Ahuas for one week, from March 1st or 2nd to March 8th. 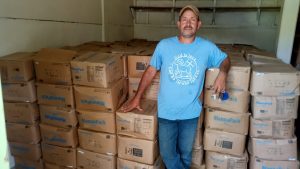 Lutheran World Relief (LWR) agreed to donate a container of relief supplies worth $280,260.00 including 140 cartons of school kits, 140 cartons of personal care kits and 200 cartons of infant/child care kits.  We hope that the container, which is being held at the LWR warehouse in Saint Paul, Minnesota, will be shipped by Crowley in the first week of March to Florida.  It will be held in Jacksonville until we have arranged for customs paperwork before it continues its trip to Puerto Cortés in Honduras. Once it clears customs, the container will be held at Crowley’s facility in Choloma until we can arrange to have it unloaded and shipped to Puerto Lempira.  Hanes Brands has agreed to cover these international shipping costs in large part because of the generosity of Mike Faircloth who works for the company and is a Moravian from North Carolina.

Carlos Saavedra of Feed the Hungry has agreed to work through his customs agent/lawyer to process customs paperwork for the shipment.  Last minute requests to LWR for additional paperwork were answered quickly, thus allowing Carlos to submit documents to customs authorities on February 26th, thereby avoiding the February 28th deadline for exemption of import duties on relief supplies set to expire on February 28th.

The World Food Program approved our application for transportation assistance for the supplies which we hope will clear customs in middle or late March.

Our application to LWR contemplated the hiring of one administrative assistant by each Moravian Province to assist with distribution of the relief supplies and with the record-keeping required by LWR.  Once the relief aid arrives in Puerto Lempira, the two provinces will unload and store the supplies until they are distributed to disaster victims.

Our application estimated a cost of approximately $20,000 to cover shipping, customs, distribution, and hiring of the administrative assistants.  With the generous support of Hanes Brands, Crowley, Feed the Hungry, and the World Food Program, we may only have to cover internal distribution in La Mosquitia and the hiring of the two administrative assistants. 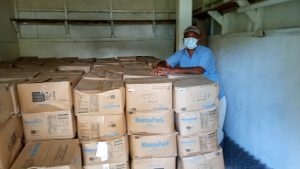 If arrangements can be made and the BWM approves, I will travel to Honduras in early April for meetings to discuss the future of Alas de Socorro and possible support for the Moravian Medical Work.  At that time I hope to follow up on all of these efforts as the final phase of my participation with the BWM’s disaster response efforts in Central America.

The days are surely coming, says the Lord, when I will make a new covenant with the house of Israel and the house of Judah. Jeremiah 31:31

They are Israelites, and to them belong the adoption, the glory, the covenants, the giving of the law, the worship, and the promises; to them belong the patriarchs, and from them, according to the flesh, comes the Messiah. Romans 9:4-5

Promise-keeping God, we extol your faithfulness throughout all generations. Enable us to be loyal partners with you, and so reveal your steadfast love and mercy to those who are seeking a sure foundation. Amen.