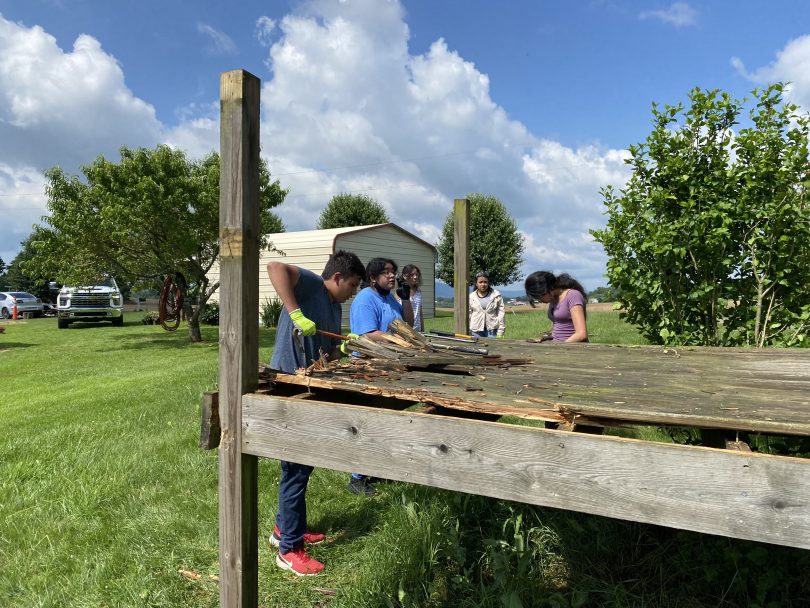 The Vital Ministry of Children
by the Rt. Rev. Chris Giesler
Director of Mission Engagement

For Jesus to hold a child in his lap and say: “Whoever welcomes one such child in my name welcomes me, and whoever welcomes me welcomes not me but the one who sent me.” would have been a radical re-ordering of the world’s social order.  What Jesus is saying is that the kingdom of God is radically different than our world.  Those perceived to be first will be surprised to be last; the rich will be poor, while the poor (especially in spirit) will be exalted.

I contend that Jesus knew that this reordering of social status would have far-reaching impacts.  As a matter of fact, it touches us even today.

Several years ago, British writer and naturalist George Mombiot gave a TED Talk, a portion of which I would like to share with you.  I think you will find it fascinating. (You will find a video of the full talk here)

In the Yellowstone National Park, wolves were quietly reintroduced into the habitat in 1995. Now, we all know that wolves kill various species of animals, but perhaps we’re slightly less aware that they give life to many others. It sounds strange, but just follow me for a while. Before the wolves turned up, they’d been absent for 70 years. The numbers of deer, because there was nothing to hunt them, had built up and built up in the Yellowstone Park, and despite efforts by humans to control them, the deer had managed to reduce much of the vegetation there to almost nothing… they had just grazed it away. But as soon as the wolves arrived, even though they were few in number, they started to have the most remarkable effects. First, of course, they killed some of the deer, but that wasn’t the major thing. Much more significantly, they radically changed the behavior of the deer. The deer started avoiding certain parts of the park, the places where they could be trapped most easily, particularly the valleys and the gorges, and immediately those places started to regenerate. In some areas, the height of the trees quintupled in just six years. Bare valley sides quickly became forests of aspen, willow, and cottonwood. And as soon as that happened, the birds started moving in. The number of songbirds, and migratory birds, started to increase greatly. The number of beavers started to increase because beavers like to eat the trees. And beavers, like wolves, are ecosystem engineers. They create niches for other species. And the dams they built in the rivers provided habitats for otters and muskrats and ducks and fish and reptiles and amphibians. The wolves killed coyotes, and as a result of that, the number of rabbits and mice began to rise, which meant more hawks, more weasels, more foxes, more badgers. Ravens and bald eagles came down to feed on the carrion that the wolves had left. Bears fed on it too, and their population began to rise as well, partly also because there were more berries growing on the regenerating shrubs, and the bears reinforced the impact of the wolves by killing some of the calves of the deer.

But here’s where it gets really interesting. The wolves changed the behavior of the rivers. They began to meander less. There was less erosion. The channels narrowed. More pools formed, all of which were great for wildlife habitats. The rivers changed in response to the wolves, and the reason was that the regenerating forests stabilized the banks so that they collapsed less often so that the rivers became more fixed in their course. Similarly, by driving the deer out of some places and the vegetation recovering on the valley sides, there was less soil erosion because the vegetation stabilized that as well. So the wolves, small in number, transformed not just the ecosystem of the Yellowstone National Park, this huge area of land, but also its physical geography.

Now, I am not for one second comparing our children to the wolves of Yellowstone Park because our children are hardly as frightful and certainly a lot cuter, but I am using this as a metaphor to illustrate the impact that children have on our congregations today.  It is often said that children are the future of our church, and technically that is true because statistically, more of them will be alive in 25 years than those in my age group.  But the truth of the matter is, if children were to be taken out of our church today, we would not survive the next year.  They are vital to the life of our congregation, which makes the current Covid pandemic all the harder to take.  Our youth are disappearing from our number because, as of yet, those 12 and under cannot be immunized, and others refuse to accommodate these most vulnerable by wearing masks.

In our scripture passage this morning, Jesus is again reminding his disciples, as he does three times in the Gospel of Mark, that they are on the way to Jerusalem, and once he will be arrested, persecuted, and executed. Jesus is aware that as they were walking from the Mountain of Transfiguration back to Capernaum, the disciples had been discussing which among them was the greatest.  Jesus had just reminded them of what was awaiting him in Jerusalem (betrayal, persecution, and even death), and they respond by discussing who among them was the greatest.  When Jesus asked them what they had been talking about, they must be embarrassed because their awkward silence is deafening.  We also might have had the same response if caught red-handed, so to speak.  I am sure that each of us has been confronted with behavior on our part that caused us to be shameful.  Most likely, we too were silent.

The disciples seem to be suffering short-term memory loss regarding Jesus’ words about suffering and dying. They would rather think about glory, but then, who wouldn’t?  They’re human, just like us, and their sights are set much lower, on the high places of honor.

So Jesus sits down and tells them, “Whoever wants to be first must be last of all and servant of all.”  Then Jesus takes a little child, the lowest of the low on their social standing list, places him or her in the middle of the group, and says, “Whoever welcomes one such child in my name welcomes me, and whoever welcomes me welcomes not me but the one who sent me.”

At face value, it is hard for us today to truly grasp the meaning of Jesus’ words here because children hold far greater status in our culture than children did in Jesus’ day.  While most families loved and cared for children, they were still seen as tools for the family business. They were property to be bargained for as fathers often did for the marriage of their daughter.  She was oftentimes married off to the highest bidder rather than to someone who loved her.  The father of a son would want to see that his child was marrying up the social ladder so that he could expect some return for his investment.

But in God’s kingdom, the last are first, and the first are last.  It always has been, always will be.  But just as it was when the wolves were reintroduced into Yellowstone, many unexpected things began to happen.  So it is when we welcome children not as the church’s future but as a valued partner of the now.  This past summer, I spent a week at Laurel Ridge, providing the programming elements at one of the four mission camps sponsored there.  For the week that I was there, the youth groups from Friedberg and Estamos Unidos (We are One) Moravian congregations were there to work on the homes of those who live around the camp that need a little assistance. 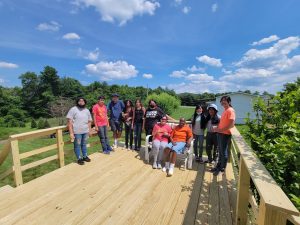 These young people were most definitely the hands and feet of Christ to those whom they served, which is what the church is all about. The picture above is of one of these projects at the beginning of the week and here you see the finished product.  They not only did a great job on the deck but also in building relationships with each other, and the woman who owns the house.

As we think about the mission of our congregations, how are we welcoming children and youth to be a part of it?

When you have eaten and are satisfied, praise the Lord your God. Deuteronomy 8:10 NIV

So, whether you eat or drink, or whatever you do, do everything for the glory of God. 1 Corinthians 10:31

Chief Chef, thank you for food and drink that nourish. Praise the Lord our God. May the actions of our hands and mouths reflect your glory. Amen.