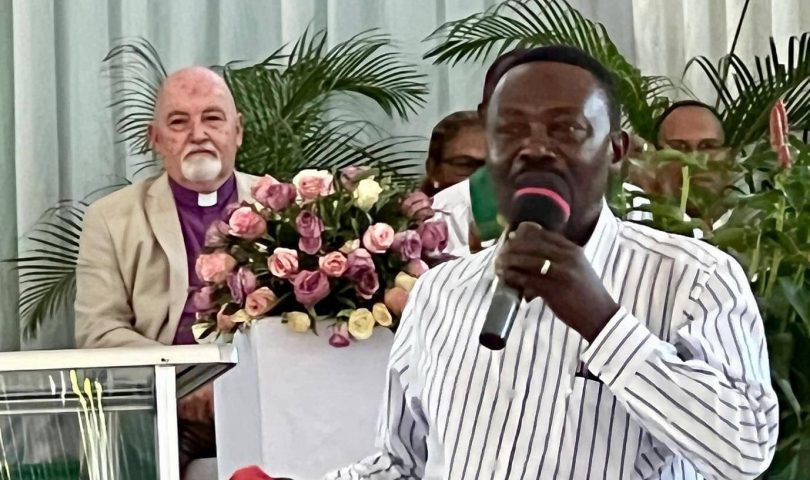 Setting Prejudice Aside
By the Rt. Rev. Chris Giesler

What is the first thing that pops into your head when you hear the word “Pharisee?” Chances are you are thinking of the string of accusations that Jesus throws on them as recorded in Matthew chapter 23, where Jesus repeatedly says, “Woe to you scribes, Pharisees, hypocrites.” Time and time again, Pharisees are called out for their pretentious show of piety while seeking earthly praise and seats of honor at banquets. We must be mindful here, however, that while there certainly was a group of Pharisees who wanted nothing more than to silence Jesus and his teachings, this did not reflect the good intentions of other Pharisees.

In our text from Luke’s gospel this week, we see an example of Pharisees who reached out to Jesus to help save his life. Unexpectedly, this group came to Jesus while he was still in the region of the Galilee to warn him that he had been placed on Herod’s hit list. This is the same Herod that had beheaded John the Baptist, so Jesus had good reason to be mindful of this man’s power and hatred. Nonetheless, Jesus presses on unfazed by this threat insisting that he will carry out his present mission and not rush off to save his own life. Jesus even throws a descriptive insult towards the king, calling him a “Fox .”Foxes in those days were known for killing sheep and chickens, much to a village’s dismay. They were hated. Even as evidenced today, you never want to disparage a dictator for fear of your own life. But Jesus says what he says and does what he does, knowing that he served a greater cause than this earthly kingdom and its evil empire.

But we notice once again that a group of Pharisees comes to Jesus and warns him of this imminent threat and encourages him to flee for his life. Not what we would have expected from this assembly. But such is the way that prejudice plays with our vision of reality. It was prejudice that sent Brandon Jackson to 25 years in prison in Louisiana after being convicted by a non-unanimous jury. He pledged his innocence during the trial, and the only witness who accused him of the crime was another prisoner who was granted leniency for his testimony. He later recanted his words. The Louisiana law, which is now be determined to be unconstitutional practice, allowed for non-unanimous convictions to help discount the votes of black jurors. This is racism at its worse, with prejudice to be found at the root of it.

My father was a missionary in Nicaragua when I was born. I lived there for almost ten years, mainly on Nicaragua’s east coast, which is Afro-Caribbean in culture. So people with dark-colored skin were my classmates and friends. They were the leaders in the congregations that served alongside my father. Imagine my shock to move to Winston-Salem, NC in 1969 and hear black people disparaged, with the “N-word” spoken often and without shame, by active members of the Moravian Church where we were now placed. Years later, my father told us that while being toured around the church property soon after arriving, one of the board members took him to the adjacent God’s Acre (cemetery) and proudly declared that there were no “N’s” buried here.

I, too, must confess my own prejudices about people who support political candidates that I find reprehensive; or those who, these days, don’t share my views of mask-wearing and vaccination status. None of us are free from this notion, but we must confess it and seek to follow Jesus’ command to love all people.

Why does this matter? Prejudice can short-circuit mission! It reduces our capacity to work with others that share the same love of Jesus. It keeps us from providing a witness to the world that all people are children of God who deserve our respect and compassion.

What’s the first thing that comes to mind when you hear the word “Pharisee?” Perhaps this week, you can add “friend of Jesus” to your impression. Think of the groups of people that you find hardest to love. What can you do to step across the prejudicial boundaries you have set up to learn something new.

Getting back to Brandon Jackson, who spent 25 years in prison, wrongly convicted. Today he holds no malice in his heart toward anyone and is simply enjoying morning coffee and prayer time with his mother every morning. He enjoys stepping out in his backyard to feel the rainfall on his head and call the raindrops God’s tears. You can listen to his testimony at https://www.npr.org/2022/03/07/1084870790/brandon-jackson-aims-to-help-others-who-were-convicted-with-split-decisions .