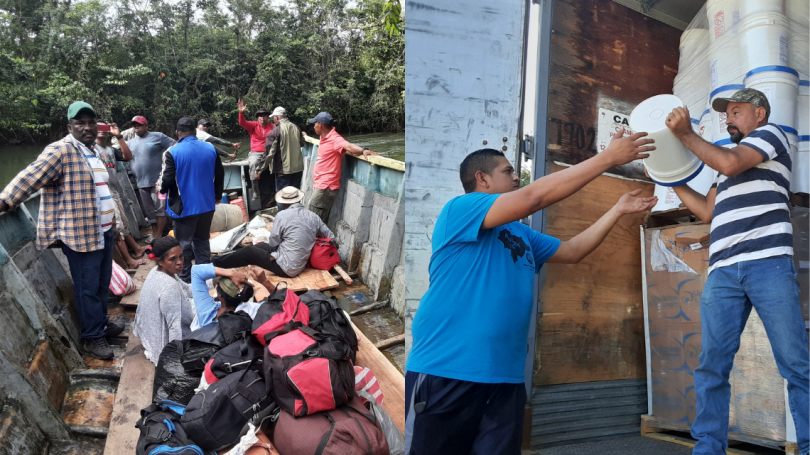 Relief supplies being delivered to flooding victims in Honduras.  Light is being shone into the darkness.

While the Gospels of Matthew and Luke give us different versions of what happened on the day Jesus was born, Mark’s Gospel has no birth narrative.  The Gospel of John contains no birth narrative, but John gives us the “why” of Jesus’ arrival in human form.  Simply put, Jesus is to be a light shining in the darkness.  To bring meaning into meaninglessness. To provide belonging where there has been division.

I ask the question “why” about many things in life. Maybe that is the 3-year-old child, still alive and well deep in my soul.  Why didn’t Noah swat those two mosquitoes or leave the skunks at the door? Why?

Why, when I’m hungry and open the refrigerator door and don’t find anything I want to eat, I’ll return to the refrigerator five minutes later with hopes that something new has materialized?

Why is it called rush hour when cars usually move a lot slower in the middle of it?  Why?

But the why of Christmas is that in the gift of Jesus the Christ, the light of God’s love is set free in human form, and to this day, that light has never been extinguished.  Jesus’ life was most importantly about inclusion.  Many people in those days were made to feel unworthy or unfit to be part of God’s kingdom because they were condemned and considered unclean.  Lepers, tax collectors, Samaritans, and prostitutes were just some of the folks who had no standing when judged by the religious elite.  But these of the folks that Jesus gravitated to.

I recently was privileged to officiate at the wedding of my niece.  Her fiancé has had cystic fibrosis since his earliest days on earth, and at one point several years ago, it appeared that his lungs could no longer function, and he was given months to live.  Thankfully he was put on the lung transplant list, and miraculously a suitable set of lungs became available for him, and the surgery was a complete success.  Today he is a healthy young man with a normally functioning pair of lungs. The gift of life for him, however, came at the expense of another family who had lost a loved one.  It turns out it was a 42-year-old woman who was a mother of two children.  But in their grief, they agreed to allow her healthy lungs to be shared with someone who had not taken an unlaboured breath for decades. That gift gave life and the possibility of health to somebody with almost no hope.  I am not about to say that God caused one death so that life be given to someone else.  I am saying that one family was willing to give, even in their darkest hour, so that someone else might live. That is the power of redemption.  From tragedy, something miraculous happens.  From darkness came light.  The amazing part of this story is that the parents of the woman who gave her lungs to allow for this wedding to happen were invited and came to the wedding.  When they were given recognition at the reception, they received a standing ovation from all of the guests.  I was thrilled to be able to get to know them.

The truth is that these gifts are all around us all the time, and we don’t even know it.  It is sort of like old Jed Clampett.  Many of my generation will remember Jed from the TV show “The Beverly Hillbillies.”  The story goes that he was a poor mountaineer who barely kept his family fed.  But then one day, when he was shootin’ at some food, up from the ground come a bubblin’ crude.  Oil that is, black gold, Texas tea.

I’ll spare you the rest of the ballad, but Jed got rich and moved his country bumpkin family from the hills of Tennesee to the Hills of Beverly.  But you see, the assumption here is that Jed had been walking across this land for all of his life, not knowing the riches beneath his feet.

I believe an abiding faith is an untapped resource for most of us today. I believe that each of us has walked by the face of God and not even known it.  We have come face to face with the divine and paid more attention to our busy lives.

There is a true story about one of the world’s most famous violinists by the name of Joshua Bell. Very early one morning he decided to play his violin in a subway station in Washington DC.  That evening he was scheduled to play to a sold-out crowd that night at the Kennedy Center, where patrons had paid over $100 a ticket to watch him play.

But at 8:00 a.m. on a Friday, in the middle of the morning rush hour, he showed up in jeans, a t-shirt, and a baseball cap, and for the next 43 minutes, he performed six classical pieces; as he did so, 1,097 people passed by. Almost all of them were on the way to work. In the three-quarters of an hour that he played, only seven people stopped what they were doing to hang around and take in the performance. Twenty-seven gave money, most of them on the run, for a total of $32 and a few coins. That leaves the 1,070 people who hurried by, oblivious, many only three feet away, too busy even to turn and look.

If you have not already made a resolution for the new year, perhaps you might want to promise yourself to take 5 minutes or so each day to reflect on where you see the light of Christ shining in your life and how you might be able to reflect that light into the world.