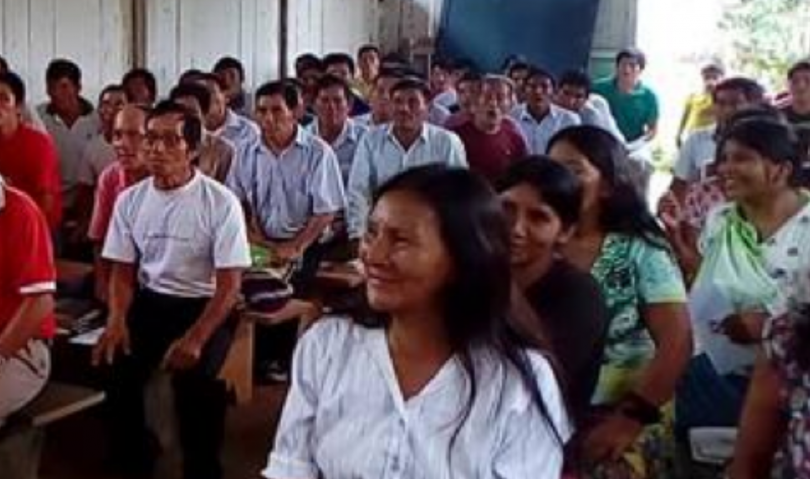 Moravians in the Amazon region of Peru attending worship.

The season of Epiphany will give us a series of texts that each give us an appearance or an Epiphany of Jesus to the world.  Today’s epiphany comes from the assigned Gospel lesson from John’s Gospel.

This account comes early in the Gospel as John has been Baptizing people in the waters of the Jordan River.  Here John the Baptist is talking to his disciples as he sees Jesus walking by.  To them, he makes the statement: “Here is the lamb of God who takes away the sin of the world.”  He then describes the baptism scene which had occurred the previous day.

The next day, as John is talking with two of his disciples, they see Jesus walking by again.  To them, John again makes the statement: “Look, here is the Lamb of God!” I guess curiosity got the best of them, and they leave to follow Jesus, apparently at a distance, to see what they could learn about him. But Jesus became aware that they were following, and he turned and looked at them. I can imagine a smile on Jesus’ face when he asked, “What are you looking for?” I can only imagine this surprised the disciples. So scrambling for something to say, they asked, “Rabbi, where are you staying?” What a silly thing to ask, and I doubt that wasn’t what they wanted to know. It was just the first thing they could think of.

Obviously, with John having twice identified Jesus as the Lamb of God, they wanted to know what that meant. I imagine that Jesus waved a hand as he said, “Come and see.” One of those two disciples was Andrew, who ran home after spending most of the day with Jesus to get his brother, Peter.  Bursting with enthusiasm, Andrew says, “We have found the Messiah (which means the anointed one).  Andrew takes Peter to Jesus, and these two become the first two of Jesus’ disciples.

It is hard to learn anything from Jesus if we are following from a distance.  More often than we know, Jesus turns and looks at us, asking: What are you looking for?  Perhaps that is the most profound question we must ask ourselves at the beginning of this new year.  What are you looking for? What are we seeking out of this new year?  How is our relationship with Jesus informing our priorities and our focus?

And Jesus begs us to come closer and see!  Come and see!

If these last three years with the Covid Pandemic, political upheaval at home and abroad, and increasing racial tensions have taught us anything, we need to stick close to Jesus.

Something very odd happened on Monday, January 2, 2023.  Football fans in much of the United States had settled in to watch what was to be a clash between two of the best teams in the league who are seeking to have the top seed in the upcoming playoffs.  The winner of  this particular game would not have to play in the opening round of the playoffs and they would home-field advantage for the playoffs. That means a lot! This game featured some of the best players in the league and would be a very entertaining evening even if you were not a big fan of either team.  It had all the build-up of being a great game to watch, with a lot on the line.  Both teams scored on their first possessions, but then things got very interesting.  On what appeared to be a relatively routine play, a defensive player tackled the person who was running the ball, and both men fell to the field.  This happens dozens of times in a game and thousands of times in a season.  After the play, the defensive player stood up but then collapsed to the field.  As the team trainers got to him, they quickly realized that the young man’s heart had stopped.

Doctors were summoned, the ambulance came out, and they did CPR, including using a defibrillator to get his heart going, all of this unfolding in front of a packed stadium and a national TV audience.  As they worked on this young man, players were visibly distressed with players from both teams comforting each other.  They loaded the young man into the ambulance and rushed him to the hospital.  As this happened, his coach huddled his teammates together for a prayer.  An ESPN network analyst stopped his reporting minutes later and said a prayer.

Suddenly, in the middle of an NFL football game, a holy moment brought the presence of Jesus near.  The truth is, he was there all the time.

Life is fragile and unpredictable – yet we often find ourselves following Jesus at a distance, perhaps only catching sight of him now and then just before he goes around a corner.  Life is too short and unpredictable not to heed Jesus’ invitation to come and see.

Let’s be very honest with ourselves here:

In her commentary on workingpreacher.com, Dr. Audrey West, who taught New Testament courses at Moravian Seminary for several years, has written the following.

Why don’t we do it together!  AMEN.