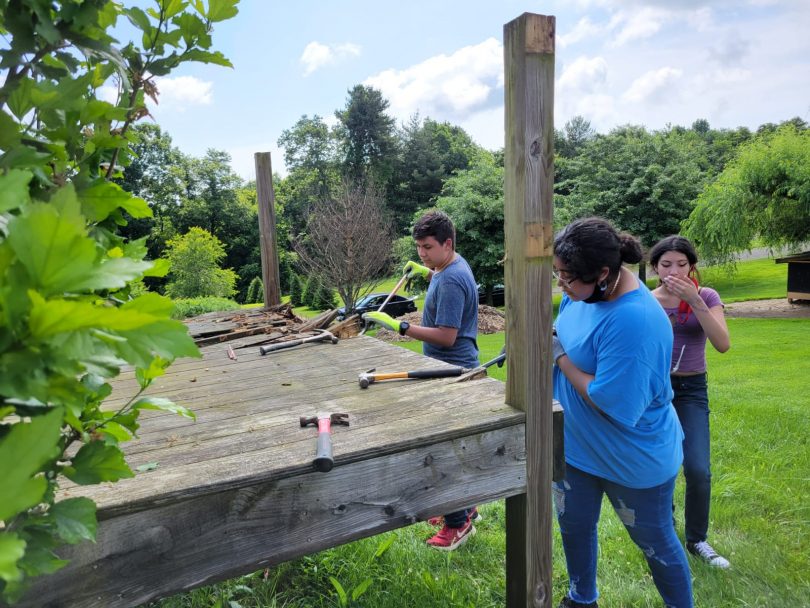 Even as small as I was back in my Junior High School years, I played football in the 7th grade at Wiley Mr. High in Winston-Salem.  Mr. Sprinkle was the school’s PE teacher and the head football coach.  I will never forget his pre-game pep talk in our first game of the season.  It went something like this:

“All right, men!” (He called us men, even though we were mostly 11 and 12-year-olds)  “Men, I know that winning is not everything, but it sure beats losing.  I know you want to get out there and win today, so here is what you need to do.  On the first play of the game, I want you to show the other team that you are going to dominate this game.  You have to hit the person across the line of scrimmage extra hard on the first play.  You show him who is going to be in control of this game. You hit him hard, and don’t let up until the end of the play.”

So after a few more inspirational thoughts, we ran out onto the field.  After the opening kickoff, we had the ball first, and I was one of the wide receivers, and the play was going to be a run around my side of the line, so I was supposed to block the defensive back that was lined up right across from me.  Following the coach’s instructions,  I was looking at the guy that was supposed to knock into submission, and I gave him a scowl.  He then audibly growled back at me.  And just before the play, I heard many of his teammates do the same thing. They were growling at us.  And in a flash, it dawned on me that their coach had pretty much given them the same speech about hitting hard on the first play; but he had added this growl thing to intimidate us even more.  So with the snap of the ball, I ran at this guy with all the speed I could muster up. You have to know that because I was such a small kid, I was wearing a uniform that was about two sizes too large.  I remember spending as much time pulling up my pants as doing anything that would resemble a football move.  But here I am running at this kid, and I throw all of my 60 pounds at him, and he reaches out grabs my face mask, and throws me to the ground.  And right then and there, I knew it would be a long day.

Isn’t that how we are taught to take life on in our society? You take control, you intimidate, you don’t show any weakness, and you exude confidence.

A couple of years ago, I watched a bit of the Women’s Championship of the Australian Open Tennis tournament between China’s Li Na and Kim Cluisters from Denmark.  I was amazed at how good these professionals were and wondered how they develop such talent. I’ve always wondered what the secret is, and I found out during that tennis match while watching an advertisement between sets.  The secret is confidence, which can only come from having a face clear of blemishes.  True, it was an advertisement for Proactive skin treatment and featured the #1 Women’s tennis player in the world at the time, Caroline Wozniacki. She says that she gains that confidence by getting out on the court and not having to worry about blemishes on her face.   Amazing!

Not long ago, the Raleigh News and Observer published research on how society measures success for men.  And here is the list:

The poor in spirit – not the ones all puffed up
Those who mourn – the broken-hearted. Those who know they are held in God’s gracious arms when they are most in need.
The meek – the servants, not the ones throwing their weight around
The merciful – not the ones keeping score – those who look for the best in others
The pure in heart – those who look out not for their own good but for the benefit of the greater good and the kingdom of God.
The peacemakers – there is no more challenging job than to be in the middle of folks who are angry at each other.
When you are reviled and persecuted – especially if that persecution came because you stood up for someone who was powerless.

There would appear to be a wide gulf between the world’s popular image of a successful person and what the kingdom of God is all about.

Here is what is happening in our Gospel lesson for today.  Jesus had just started his ministry and was gaining in popularity. He had just selected his disciples, and large crowds were beginning to gather to hear him preach. This particular sermon is known as the Sermon on the Mount, and many scholars think that it actually represents the core of Jesus’ teaching.  It was a sermon that he undoubtedly preached repeatedly as he traveled from town to town.  Matthew chose this setting to cast Jesus as something of a new Moses, setting down a new set of commandments, what we know as the Beatitudes. It forms the introduction to the whole sermon, which runs from Chapters 5 through 7 of Matthew’s Gospel.

The problem is that we don’t grasp the true nature of happiness, and because of that, it eludes us. You see, we think that happiness deals with our outer circumstances. We believe that the truly happy person is one who has checked off the list we talked about just a few moments ago. Thus, the world’s beatitudes might read: Blessed is the person who makes a fortune. Blessed are the pretty and handsome ones. Blessed is the one who has won the applause of their peers. Blessed is the one who is recognized as a darling of society.

Belle Beth Cooper, co-founder of Hello Code, a guide that provides insights for living life, gives us 11 science-based ways to be happier.

As Jesus speaks to his disciples today, these enduring Beatitudes help us define a mission for our lives that finds its meaning in serving others.  God’s kingdom is very different from the world.  Thanks be to God.