Origin of the medical program

Though Moravian missionaries informally practiced medicine as an important aspect of their ministries, it was not until 1934 that the church established a medical clinic in Nicaragua. A remarkably gifted and determined theologian and physician, Dr. A. David Thaeler, Jr., built a small 900 square foot clinic that year at Bilwaskarma, on a budget of $625.

A year later, Dr. Thaeler sent out an appeal for a nurse. Margaret Heidenreich, daughter of Moravian missionaries in Bluefields, responded. Three days after her arrival in Bilwaskarma, she and Dr. Thaeler were engaged and were married one month later. That same year she opened a nurses’ training school. Within another year the first wing of the Ruth Thaeler Hospital, named for Dr. Thaeler’s mother, had been built and dedicated.

For many years the Moravian hospital at Bilwaskarma was the only medical facility in the region. It served a wide variety of medical needs, including surgery, preventative medicine and public health. Dr. and Mrs. Thaeler continued to direct the hospital and nursing school until their retirement in 1964. For his outstanding contributions to the people of Nicaragua, Dr. Thaeler received the nation’s highest civilian award.

Prior to concluding his service in Nicaragua, Dr. Thaeler was instrumental in the establishing of the Pauline Bahnson Gray Hospital in Puerto Cabezas. Dividing his time between Bilwaskarma and Puerto Cabezas, Dr. Thaeler supervised and administered at both hospitals.

The 1980’s brought terrible sadness to the Rio Coco area. Miskitu villages were destroyed during the warfare between the contras and the Sandinista government of Nicaragua. Bilwaskarma was not spared. The Thaeler Hospital was destroyed in 1983.

Rebuilding and a new vision

With the election of a new government in 1990, Moravians went about the task of rebuilding their villages and restoring community and church life. By 1995 a new medical facility had been rebuilt on the site of the Thaeler Hospital in Bilwaskarma. In 1997 the Nicaraguan Ministry of Health and the Moravian Church together implemented a primary health care program at the clinic.

Dr. Florence Levy, whose mother was for many years Nursing Director of the hospital in Puerto Cabezas and who is an M.D. with special graduate training in public health in England, was appointed Coordinator of the Moravian health care program and became responsible for oversight of the clinic. Dr. Peter Haupert, who served as director of the Thaeler Hospital following the retirement of Dr. Thaeler, worked closely with Dr. Levy in organizing the program. Dr. Robert Bach and Partners in Health have also assisted Dr. Levy in many ways during the past few years.

Currently, the Bilwaskarma clinic serves about 10,000 people in ten communities in the planning, supervision and evaluation of preventative and curative care and in the promotion of healthy life styles.

Between 1997 and 1999 clinic personnel saw over 11,000 patients on an outpatient basis. During these same years 225 patients were admitted, 26 major surgeries were performed, and 58 women gave birth at the clinic.

Dr. Levy resigned as Coordinator of the Moravian health program in August 2000 due to her increasingly demanding responsibilities in public health on a national level with the Ministry of Public Health.

Something exciting is happening in this remote, disadvantaged corner of Nicaragua.  As a result of an intensive ten-year program in community medicine, 10,000 Miskito Indians in ten villages surrounding the Bilwaskarma clinic have experienced a dramatic improvement in their health and well being.

What is Bilwaskarma?  It is one of the Miskito villages on the banks of the Rio Coco, the largest river in Central America, separating Nicaragua and Honduras on the East Coast.

(Bilwaskarma in Red, Managua in Green) 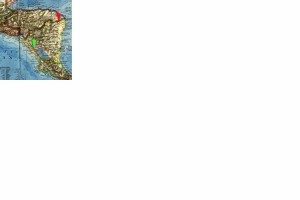 Here’s the story in a nutshell.  Bilwaskarma was selected by Moravian mission DoctorDavid Thaeler to begin his medical work in 1935, establishing the Thaeler Memorial Hospital, for a long time the only source of surgical care in the region.  Among the accomplishments of Dr. and Mrs. Thaeler R.N. was the establishment of Nicaragua’s first nursing school.

The Thaelers served into the ‘60’s, followed by Drs. John Gilliland and then Sam Marx.

Pete and Joan Haupert followed in their footsteps and carried on the work from ’68-’74.

Tragically the hospital got caught in the crossfire of the Contra War and was destroyed in the early ‘80’s.

From then until the mid-nineties it remained a silent ruin. 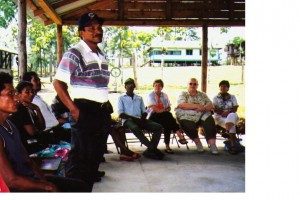 (A Remnant, with the Bilwaskarma Moravian Church in the Background)

In 1996, the people of Bilwaskarma issued a startling invitation to come see the new 12-room Clinic they had constructed, and help them re-establish it as a source of medical care. And that’s what happened.  The Clinic program was staffed completely by local Nicaraguan professionals, and supported financially and guided by an international team. Something was missing though, and that’s where the Outreach Program comes in. Here was the problem.  Although Bilwaskarma was the source of care for all who could get there over the previous seventy-five years, the situation in the villages was unaffected, and until 2000 the child mortality stayed fixed at a horrific 1:3 deaths before the age of 5. The Outreach Program was instituted in about 2000, and continues today to provide a comprehensive, intensive program of education, promotion, village leadership organization, and statistical analysis.  Monthly, a team from the Clinic visits each of the 10 villages and helps the villagers carry out endeavors that they chose themselves as their “felt-need” priorities. 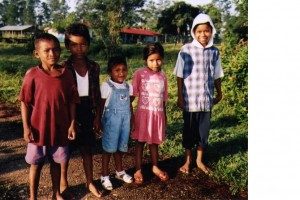 And guess what—it’s working, statistically documented, and dramatically.  That tragic child mortality figure mentioned earlier had been relegated to history.  For example, in 2010, the preventable infant mortality was zero for the entire 10-village population.   So, the program is truly making a difference.

Bilwaskarma Kids – That’s What It Is All About! 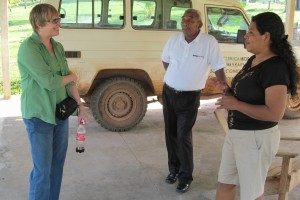 Watchword for the week — It is good to give thanks to the Lord, to sing praises to your name, O Most High. Psalm 92:1

I will sing to the Lord, because he has dealt bountifully with me. Psalm 13:6

Are any among you suffering? They should pray. Are any cheerful? They should sing songs of praise. James 5:13

Divine Muse, attune our ears to the song of praise to you that lasts eternally. May we always lend our voices to this song, regardless of our circumstances, for all our noises are joyful to your ears. Amen.