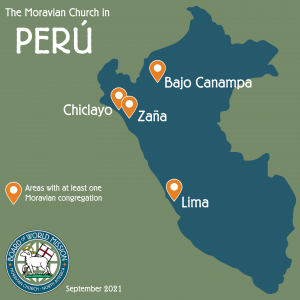 Perú is a mission area of the Worldwide Moravian Unity under the supervision of the Northern Province and a new work area of the BWM. The Moravian Church in Perú was founded in August of 2011 in the city of Chiclayo. In the short time since then, the church has grown to include congregations in Chiclayo, Lima, Zaña and Bajo Canampa as well as a number of other ministries. The church has held two national conferences, the most recent being in 2019.

The Breakdown of the Current Moravian Church in Peru:

Other issues and challenges

Teams that have traveled to Peru:

Looking for information on Peru to share with your congregation? 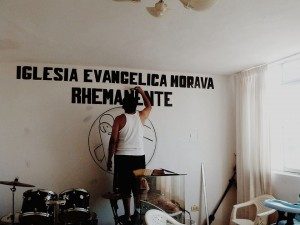 A small team of Northern Province Moravians will travel to Peru in March 2016 to build relationships with new Moravians there. We will visit four relatively new churches that are becoming established in two cities, Lima and Chiclayo. The congregations have been house churches and are transitioning to rented facilities. We will worship with them, foster personal relationships, and do other work according to the team’s gifting and the local need. That may include construction-related projects and/or programming. Team members should be flexible, open, and willing to be used by God in unexpected ways.

For more information contact Justin Rabbach with the Board of World Mission ([email protected]).

Leaders and young adults traveled to Peru from July 25, 2014 to August 2, 2014 to participate in a mission experience.  Below is a reflection from one of the young adults about her time there:

Before our team left for Peru, Mrs. (Señora?) Hilda Regalado offered us a number of good pieces of advice (including “bring a roll of toilet paper”- a recommendation I echo!), but she especially emphasized that we would need to open our hearts. This applies in the case of any mission trip, but it was particularly necessary for us to “go to ground” (phrase credit to Col. Dave Gignac) in a place like Peru.

I cannot underscore enough how warm and loving our reception in Peru was.  I felt like we were constantly eating because the pastoral families kept giving us snacks even though resources for their churches were limited.  Further, at every gathering, each person would greet every other person in the room with a snug embrace (and a kiss on the cheek for the women).  This created a loving atmosphere right from the get go! That’s how the Peruvians we met were about everything. With open hearts, they live by “in all things love,” and that was evident from the moment they met us at the airport with big smiles on their faces.

I have always been a shy, reserved person– an introvert to Myers-Briggs, or a timid sheep as I described myself to the Peruvians. My faith journey has matched my personality, as I have rationally thought about and evaluated what I have learned about God, liking and accepting what I have learned along the way.  I have felt overwhelmed by my awareness of God a few times– mostly in moments of great mercy or at times spent looking up at the night sky on a certain mountaintop in North Carolina.  But even in these more intense moments, my relationship with God was still largely restricted to what was in my own head.

Peru showed me another dimension of God, which gave a new depth to my faith.  One of the things that really struck me is that some Peruvian Christians do not dance outside of church. When I first heard this, I thought that it was an unnecessarily puritanical rule.  Let the people dance!  After further consideration though, I have a newfound appreciation for the concept.  Dance is an expression of joy, and these Peruvians choose to live their most joyful moments when they are worshipping!  How awesome!  They bring their best, the fullest version of themselves before God in worship.  For so long, I have reserved worship as serious time for respectful and peaceful thought about God.  I still believe there is a place for this, and I value this type of worship and truly benefit from it.  However, there is also a place for an overwhelming, expressive, unrestrained, exuberant type of worship! The Good News is GREAT News, and the worship services we took part in in Peru really channeled this message. The churches where we worshipped in Lima and Chiclayo have such a focused, genuine faith, and participating in their worship was a privilege.

One song particularly encapsulated my experience in Peru.  We sang “Open the Eyes of My Heart” a few times, and it was really neat because the Peruvians would first sing it in Spanish, and then we would sing it in English, and it created this really cool blend in the end. The meeting of differences made the song special in one way, but the lyrics also hold significance for me. For so long, I have seen God with my mind, as I discussed already.  But, the mind is the last on the list of places where we are supposed to love God! (And he answering said, Thou shalt love the Lord thy God with all thy heart, and with all thy soul, and with all thy strength, and with all thy mind… (Luke 10:27a ASV)).  So Peru blessed me by opening the eyes of my heart so I could see more of God.  It is difficult to describe how a heart is changed.  Words are much more useful for describing changes in the mind, so I apologize for leaving unsaid the things I do not know how to say.

But I do want to say that Peru captured my heart and, just after I came back to the US, it felt like I was only left with a big hole and the hope of return.  But thankfully that is not true!  I am left with countless memories and new connections (hooray for Facebook) and a newfound internal passion for God because the eyes of my heart were opened. Te amo, Perú! Gracias!

I also want to mention a couple of other memories that struck me though:

* We evangelized the morning of EBDV (which took place in the afternoon) at both Cruz de la Esperanza and Rhemanente, and we had about 65 and 75 kids attend each, respectively.  We thought that was amazing, especially compared with how far in advance VBS in America is usually planned in order to draw in that many kids.

* I was in an evangelizing group with Pastor Walter and Monica’s one day, and it was really cool to be able to watch them reach out to their neighbors by inviting them to EBDV.  I had never participated in door-to-door evangelizing before this, so they were a great example.  I also appreciated how they found a way to let Thor and me help, even though we didn’t speak much Spanish.

* Pastor Christopher from Iglesia Rhemanente told us about how he was drawn to the Moravian faith because of its historical roots and the Reformation.

* About a week after the trip, I was chatting with Tomy Lee on Facebook, and he was speaking to me in English because he is trying to learn it.  At one point, he said, “I am Moravian heart”— I thought that was just perfect!

I had asked the pastors in Chiclayo to meet with Jirina and plan out her time for the next few weeks. (Jirina Cancikova is currently serving in Peru as an Antioch Servant until February 2014). Last night I received this report from Pastor Christopher Valencia Alcantara (pastor of the new Rhemanente Moravian Congregation in Chiclayo, that will have its opening service this Saturday – some of the municipal authorities will attend the service and there will be lots of music, etc.).  Here is what he reports:

Dear Servant, I want to communicate to you that we met with Pastor Walter, his wife, and Jirina, and agreed to the following:

Jirina will help us this week with evangelism and outreach in the Urbanizacion Latina neighborhood of Chiclayo and will be with us on Saturday for our inaugural Service of Celebration.  Next week she will help Walter in Cruz de la Esperanza, Chiclayo.  Jirina will spend Christmas with Teresa and her family (owners of the restaurant where she is staying) and also be with them for New Years.

Starting in January she will alternate each week between the two ministries.  Her presence is very important, especially due to the idiosyncrasies present in this culture (he is referring to the way people would receive her when she knocks on the door since she is from another country – kind of her ticket in the door, so to speak).  Today we were evangelizing from house to house and doing personal evangelism.  We had a total of 5 conversions and 6 people who expressed interest and openness to visits from us.  We will send you photos of the service on Saturday.

Director of Intercultural Ministries and Communication

Board of World Mission of the Moravian Church in North America

In 2007, at the request of the Board of World Mission, the Unity Board designated the San Juan de Lurigancho area of Lima, Peru, as a Mission Area of the Moravian Church.  Exploratory visits were made by several teams from the Southern Province and the BWM (in 2007 and 2009) and in 2011 an organizational meeting was held with the participation of representatives from five ministries in Lima, Chiclayo and Lambayeque.  They formed the “Unity of Brothers and Sisters in Peru: A Ministry of the Worldwide Moravian Church” under the supervision of the Board of World Mission.

At present, the following ministries continue to grow and flourish with minimal outside support:

A team from Friedberg Moravian, led by Sister Hilda Regalado and Antioch partner Luís Regalado, visited these ministries in August, 2012.  This visit had a positive impact on all who were involved.

2nd Mile projects for the area have been prioritized and are being publicized.

The Unity of Brothers and Sisters in Peru is working on legal standing with the government (Personería Jurídica) and is being supported by BWM in this process.

Board of World Mission support focuses on mission as opposed to maintenance, providing funds to make it possible for more outreach work to be done by the existing ministries.

A young man from Chiclayo, Alex Ramirez, works with the “Jóvenes de Valor” (Young People of Valor) ministry, but has a vision for working with unreached people groups in the Amazon jungle.  The BWM is excited about future opportunities for partnering in this mission! 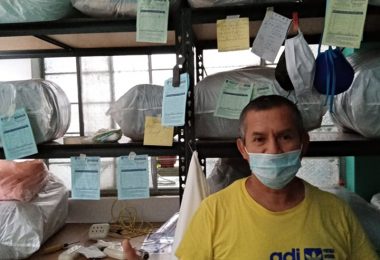 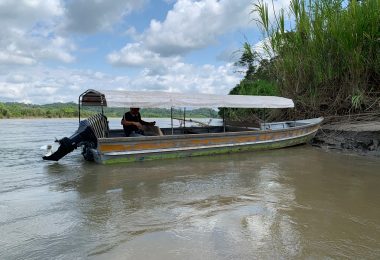 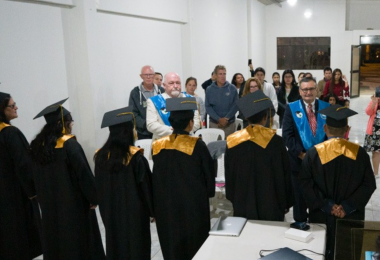 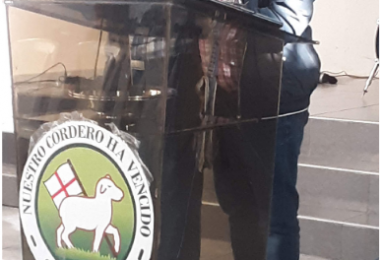