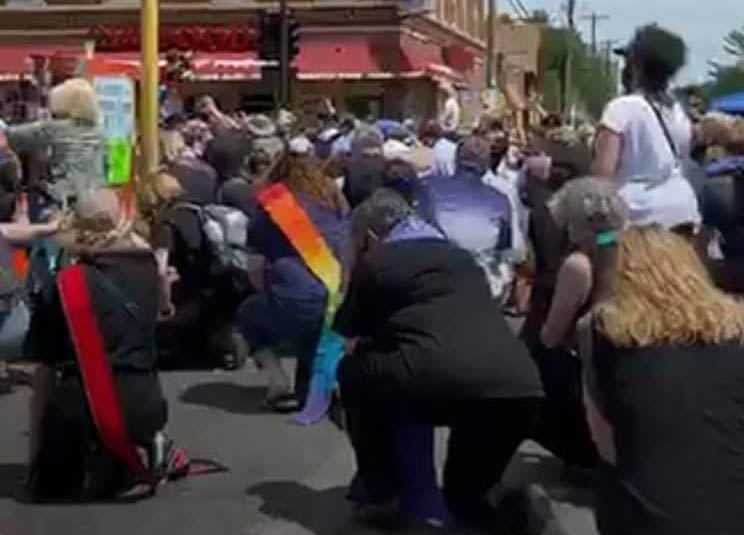 I have found that ecumenical contacts constantly remind us of the racial divisions of our culture. This month I share reflections of Brother Greg Behrend, pastor of Our Savior’s Moravian Church in Altura, Minnesota, about two hours’ drive from Minneapolis. Greg attended a gathering of clergy to pray at the site of the killing of George Floyd by Minneapolis police on May 25, an event that has brought the United States to a new confrontation with the racial inequities of the nation.

On June 2nd I found myself standing amidst a great cloud of witnesses in Minneapolis, Minnesota. Clergy from across the state gathered to stand, walk, and kneel in prayer as an act and a call for peace and justice. I had never done anything like this. The night before, I turned to my wife after wrestling all day with whether or not to go, and I said to her, “This feels right.” With that statement my path was clear. My calling was strong, and I felt a page turn in my life story that would lead to a divine newness in my life.

I have always felt that my heart is open and loving toward all of God’s children. I have always worked to be approachable and hospitable to all people. But on June 2nd, my eyes were opened to the understanding that being loving, approachable, and hospitable is not enough for what Christ is calling me to do right now. I am called to a Christlike love that actively pursues those in need.

As I drove to Minneapolis, I listened to the final sermon of our Brother Martin Luther King Jr. and held onto his words, “Make America the truly great America that it was called to be.” Now I’ll be honest, I’ve wrestled with what it means to be an American in recent years. I have had moments where I question the true heart of our country and have found myself wanting so much more. The divisiveness in our nation that I had seen in the days prior left me heartbroken and holding onto a hope that had been battered and bruised. There is much of my American heritage that I wish were different, that I wish were better, that I wish held more love for one another as children of God. Nevertheless, today I stand and can say I am proud to be an American, but I have a dream of a much better America that is far greater than what I have witnessed in recent history. With the words of Brother King resting in my heart I began walking up 38th Street, knowing I cannot change yesterday’s shortcomings, but I can work today for a better tomorrow.

I walked among a group of 800-1,000 clergy from a variety of both Christian and other religious backgrounds. We were encouraged to walk in silence and pray in our own tradition. As we gathered at the intersection of 38th street and Chicago Avenue, we as one body knelt down and prayed together our Lord’s Prayer. I felt the heaviness of a breaking world press down on me. I also felt joy, as I finally understood what was mine to do in all of this. I was humbled in a way that brought tears pouring out from deep within me. Tears of pain and tears of joy, for God’s presence became clearer to me in that moment then perhaps it ever had before.

The sun was hot, and the pavement burned against my knee, but I didn’t readjust. I could feel the presence of my beloved brother George Floyd who a week earlier breathed his last breath steps away from my burning knee. The pain I felt, in my knee and in my heart, helped me understand that just being loving and approachable wasn’t enough; I am called to a Christlike love that pursues those who are in need, and I intend to live with that love in my heart.