The full communion agreement, which was initially approved by the UMC at their General Conference in Portland, Ore., in May 2016, recognizes each other’s ministries, and encourages witness and mission work together. The agreement was also approved by the Moravian Church Southern Province at its 2018 Synod in April.

The full communion agreement was the result of several years work by the Moravian United Methodist Dialogue team. The team was co-chaired by the Rev. Gary Harke of the Moravian Church and New England Area  Bishop Sudarshana Devadhar of the UMC. Other members of the team included the Rev. Dr. M. Lynnette Delbridge and the Rt. Rev. J. Christian Giesler representing the Moravian Church (Northern and Southern Provinces), and Prof. Dr. Ulrike Schuler and the Rev. Dr. Robert Williams representing the UMC.

“Serving on the dialog team representing the Moravian Church gave me a chance to form relationships with folks that I had never met before, but yet had known for a long time,” said Bishop Gielser. “This came because my new United Methodist friends represented the legacy born out of the relationship of John Wesley and the Moravians that he had met. Formalizing this full communion agreement was simply making official what has been a reality for many years because we share so very much in common.

“Entering into this agreement calls both Moravians and United Methodists to look at each other as dear sisters and brothers in Christ, to work together to meet the needs of a world that needs God’s grace and mercy, and worship together with the aim of building up the body of Christ.” 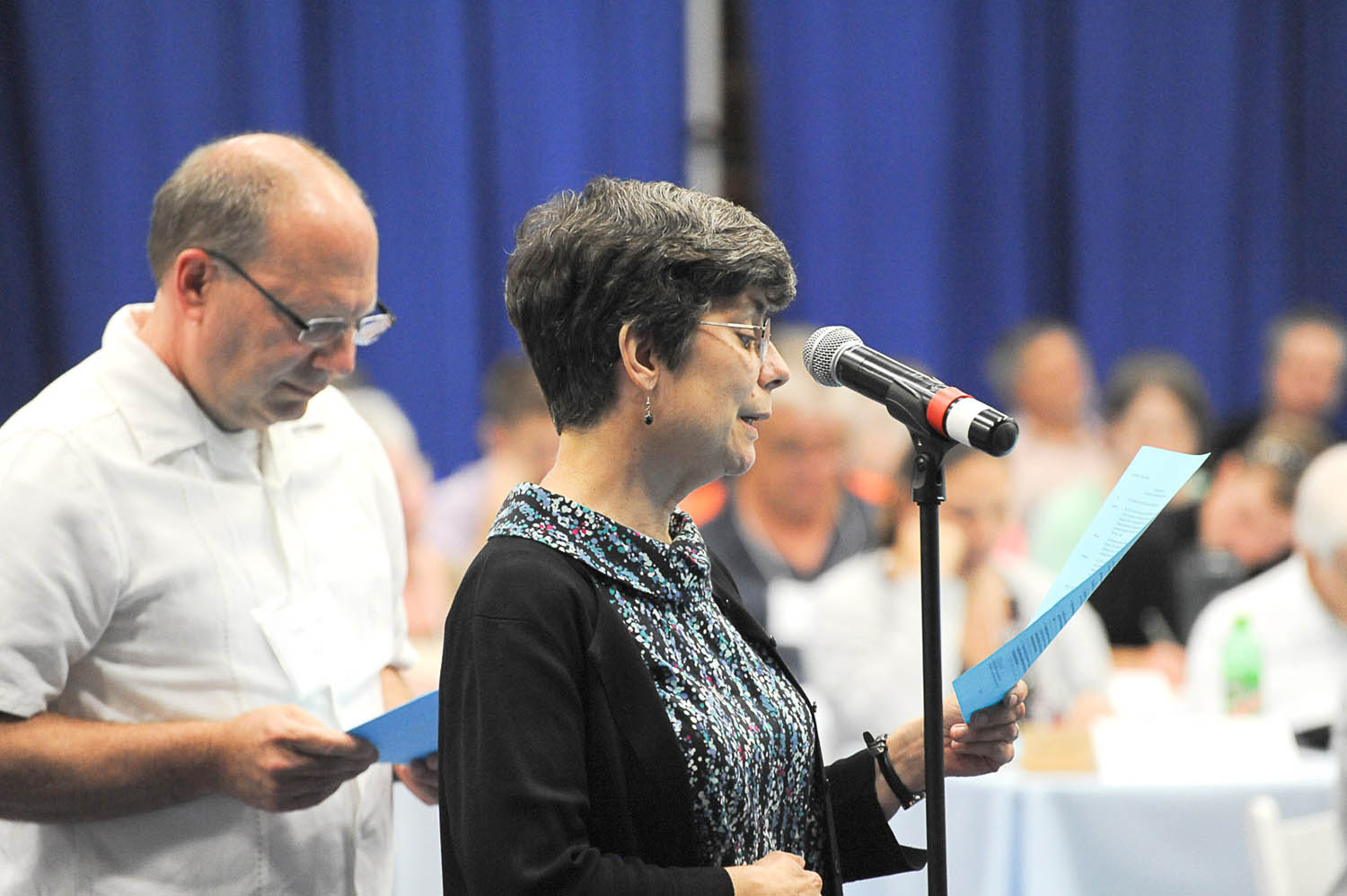 The Rt. Rev. Chris Giesler and the Rev. Dr. Lynette Delbridge present the resolution to join in full communion with the United Methodist Church. The Resolution was approved on Friday, June 22/.

“This agreement demonstrates that we are not alone in the joys, nor are we alone in the challenges of being the Good News to the world,” said Rev. Dr. Delbridge. “God doesn’t want us to do it ourselves; working together with our United Methodist sisters and brothers can help us facilitate our work at all levels.”

Following the passage of the full communion agreement, Bishop Michael Watson, UMC Ecumenical Officer, shared, “We need to make disciples of Jesus Christ for the transformation and redemption of the world. We do it better when we do it together, when we hold hands together, when we answer the prayer our Lord prayed that we might be unified, that we might come together so the world might believe that Jesus is the Christ. We are seeking to do that with you. So thank you again my sisters and brothers in Christ. We are together in the Lord who takes away the sins of the world.”

To be in full communion with our United Methodist brothers and sisters means that we mutually recognize and value the diverse gifts present in each church; respect each other as part of the body of Christ in the world today; commit each church to cooperate in common ministries of evangelism, witness and service; recognize the validity of each other’s sacramental life and ministerial orders, allowing for the transfer of membership and the orderly exchange of clergy (subject to the regulations of church order and practice of each church); and commit each church to continuing to work for the visible unity of the church, recognizing that this relationship of full communion is but a step toward the unity to which we are called.

With the ratification of the full communion agreement, the Moravian Church, Northern and Southern Provinces, is now in full communion with the Evangelical Lutheran Church in America (ELCA), the Episcopal Church, the Presbyterian Church (U.S.A) and the United Methodist Church.

Do not be exceedingly angry, O Lord, and do not remember iniquity forever. Now consider we are all your people. Isaiah 64:9

My little children, I am writing these things to you so that you may not sin. But if anyone does sin, we have an advocate with the Father, Jesus Christ the righteous. 1 John 2:1

Savior Jesus, we try so hard to follow your teachings, but we so often fall short of your commands. We pray to you for forgiveness, so that we may regain our close relationship with you. We thank you for the Holy Spirit who advocates for us sinners. Amen.