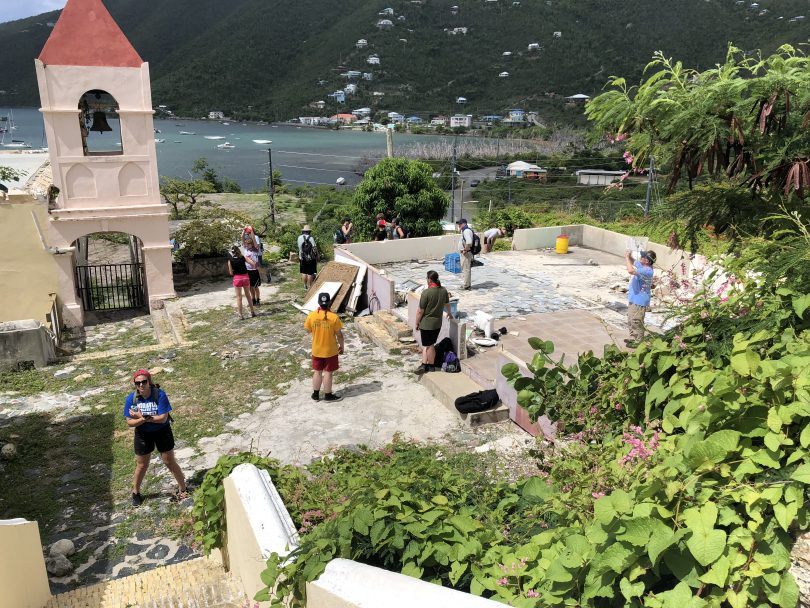 Convocation: the act or process of calling an assembly of persons to a meeting. In late June of 2019, young adults from all over the North American continent were called to meet in the U.S. Virgin Islands for the 2019 Moravian Young Adult Convo. And answer the call, they did.

St. Thomas was the site of the earliest Moravian missionaries and has a strong Moravian presence to this day. With the theme “Exploring our Moravian Mission Roots,” our hope was that by retracing the steps of our early missionaries and walking a few steps in mission ourselves, we might catch a vision of our future.

A group of 15 youth and five adults, hailing from across the Northern and Southern Provinces, gathered in Charlotte Amalie, St. Thomas. Some were old friends, others were new acquaintances. Being a small group, we bonded quickly and soon realized we were all brought together as a part of God’s calling. Our leader, the Rev. Cynthia Rader Geyer, welcomed us and advised us to be prepared for a week of walking in the steps of our Moravian foremothers and fathers and to be aware of where the spirit might be leading us to make new paths.

Our first evening together, we gathered at Nisky Moravian Church. We enjoyed the hospitality of the Nisky congregation. Bishop Chris Giesler introduced us to our program, telling stories which illustrate that small decisions have long-range impacts. While we look back in history and see decisions such as sending German-speaking missionaries to serve slaves in St. Thomas in 1732 as something big, it came about through a series of much smaller conversations, encounters, prayers and God’s spirit at work. 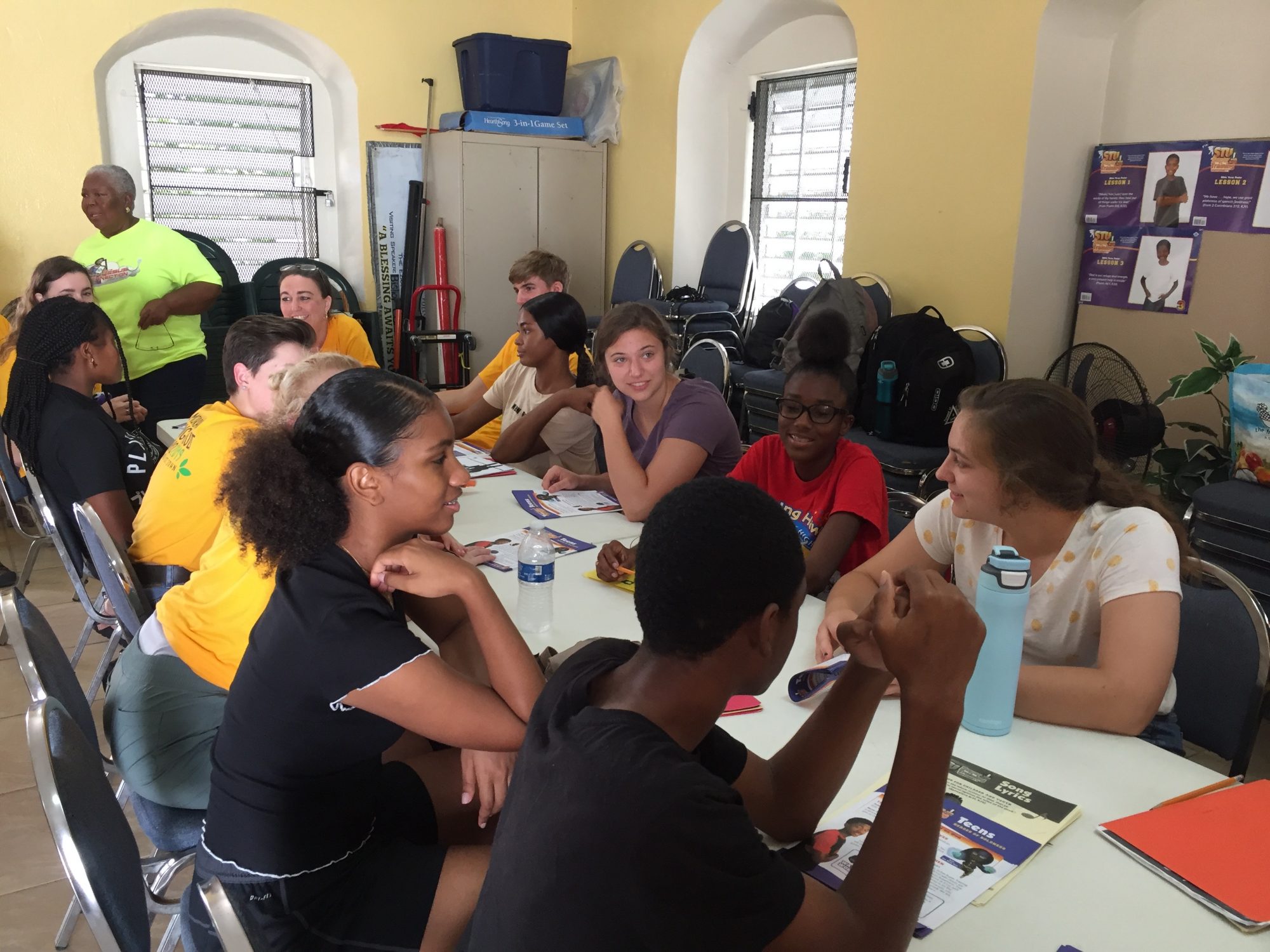 The following day we traveled to the Memorial Moravian Church, where we learned more about the impact of both missionaries and slaves on our early Moravian church in the western hemisphere. After an exciting tour of the island (including a stop for steel drums and some breathtaking views) we were greeted by Senator Myron Jackson, a son of the Memorial Moravian Church. He shared a personal view into the history of the island and explained some of the current challenges of being a US citizen in a US territory. We finished our day with vespers on the beach led by Pastor John Wallace. Under the stars, with the sound of crashing waves, it was hard not to feel the presence of our Lord. We were encouraged to reflect on the Lord’s impact in the lives of those before us as well as our lives today.

On Thursday, we made our way to New Herrnhut Moravian Church, the oldest Moravian church in the western hemisphere. This beautiful but simple structure was built by slaves on an old sugar cane plantation on land that was purchased by the Moravians from the Dutch government in 1737, over 282 years ago! While there is no denying the keeping of slaves by Moravians on the island, the intent was that they be brought to live on the Moravian land to profit themselves. Soon after, they built a sanctuary for themselves, not for the  Dutch landowners. Nestled on a picturesque hill, it is not hard to see why this spot was chosen.

At New Herrnhut, we assisted with their Vacation Bible School. A few highlights were a game of volleyball with the kids and the sharing of some of our favorite camp songs. We were overjoyed when they joined in and even recreated some of the familiar actions that go along with many of our camp songs. We visited the Rock of Remembrance and God’s Acre and could feel the spirit alive and well. Our day ended with an enlightening lesson in the art of island storytelling. 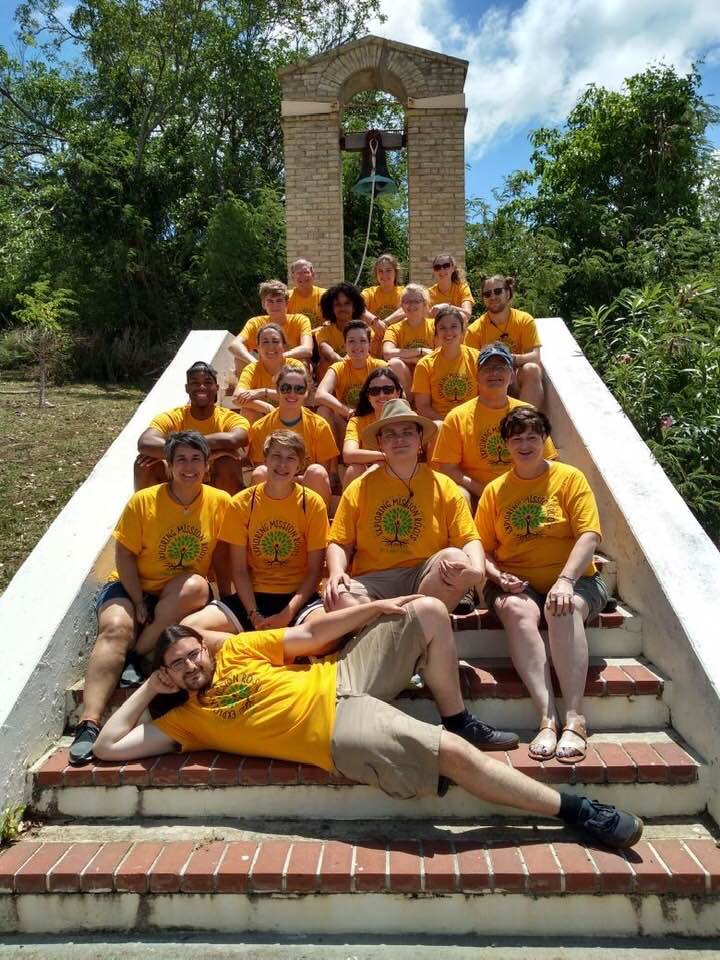 As Friday dawned, we journeyed via ferry boat to the island of St. John. As we prepared ourselves for a day of hard work at the Emmaus Church, Pastor John encouraged us to be flexible yet safe. We were greeted by Emmaus’ pastor, Vankys Isaac. While we were struck by the charm of the Emmaus church and it’s gorgeous setting, we were stunned at the sheer force of a storm that could rip the roof off of a structure. We were given a tour of the devastation of their grounds and were told of the impact of Hurricanes Irma and Maria that is still being felt today.

We stood in the sanctuary marveling at the tents the congregation had erected for shelter from the intense sun so that they could gather for worship. It touched our hearts that this flock loved their church home so much that they would refuse to worship in another, more comfortable or convenient space, but were then not surprised that Pastor Isaac was resolute in his faith that God would put a roof back over their heads. Work gloves were slipped on, hats positioned and we set to work cleaning out the basement. Years of treasures that had been tucked away were sorted and cleaned out. It was dusty, sweaty work and numerous water breaks were needed but we succeeded in clearing and organizing a space so that future work crews could move forward.

The next day was also a physical labor day. This time we arrived at the Nisky Moravian Church with paintbrushes and rollers in hand. Scraping and sanding was completed before a fresh coat of paint was applied to several high visibility exterior walls. Not a very glamorous job, but we hope that the congregation’s spirits would be lifted when they arrive for worship or school to see fresh, clean walls.

Our reward for our hard work was spending the afternoon at Megan’s Bay, one of the most beautiful beaches in the world. Our group played ball, built sandcastles, floated in the crystal-clear water and enjoyed each other’s company. 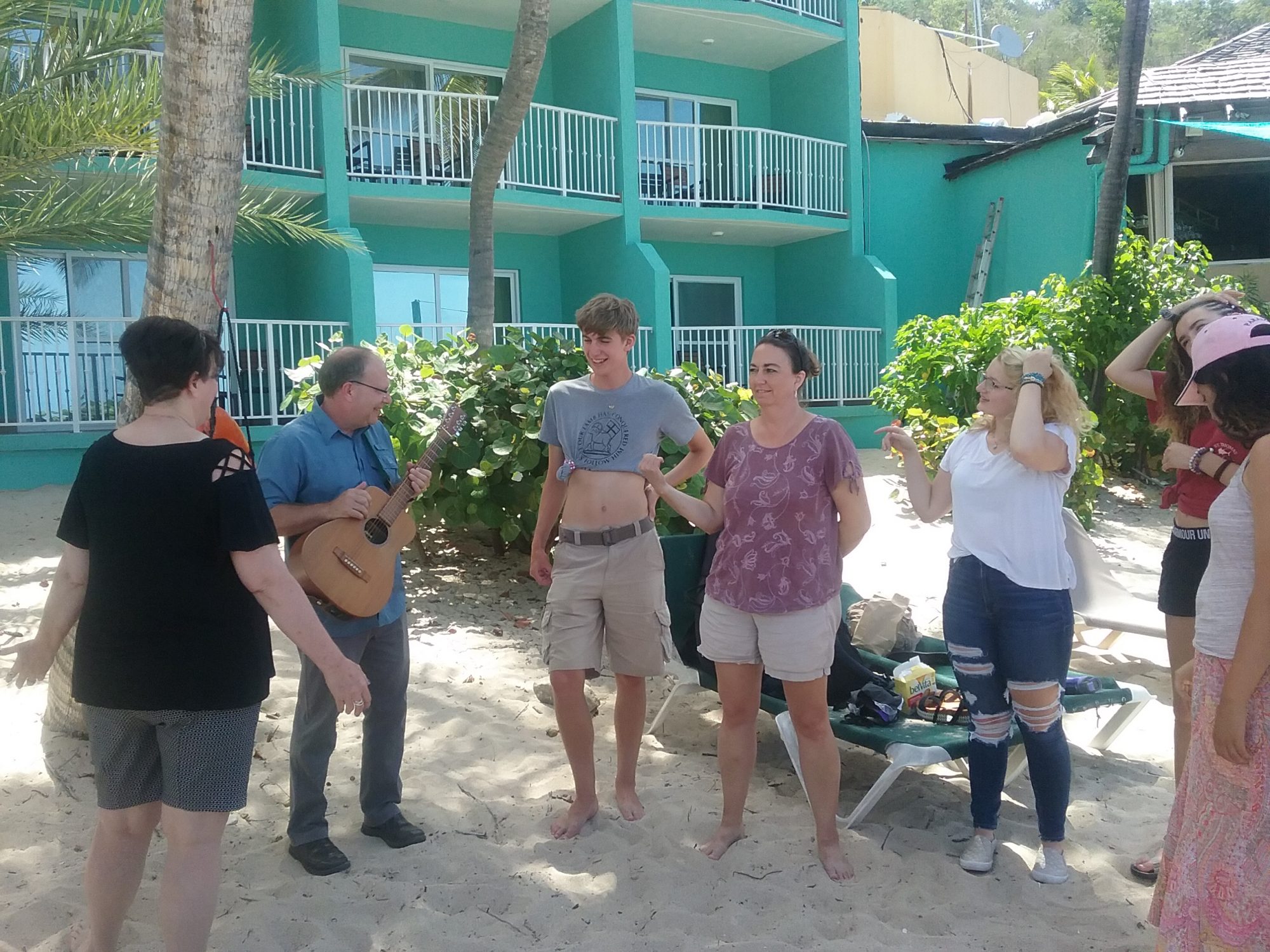 On Sunday, we traveled back to St. John to worship at the Bethany Moravian Church. Set in the hills of the lush island, we appreciated God’s glory in both the message and faces of the congregation that welcomed us. Once again, we were treated to island hospitality and good food! After lunch Bishop Giesler led us in an exercise of recognizing our spiritual gifts as well as a very impactful exercise of learning the gifts others see in us. We knew our time together was coming to a close and it was time to prepare for returning to our lives back home.

Our last day was spent on our own to explore the islands. As we divided into smaller groups to experience new adventures of parasailing, zip-lining, snorkeling, shopping and more, our connections were deepened and strengthened. At the end of the day we were excited to share our stories as we gathered back at Nisky Moravian for a closing worship. We reflected on our fellowship of Convo 2019. So many brothers and sisters in Christ had welcomed us and shown us love. We were inspired by our new-found spiritual connections and a renewal of a call to service.

Later, in the moonlight on the beach of Lindbergh Bay, we raised our voices to sing the Jude Benediction one last time. We felt we had stood in the presence in sacred places and gave thanks to the only God our Savior and felt the potential of all glory, majesty, dominion and power from before times and forever.

Carmen Gesinger is a member of Waconia Moravian Church in Waconia, Minnesota. She was one of the adult leaders on the 2019 Young Adult Convo trip to the US Virgin Islands.  Thanks to the Convo participants for their photos!