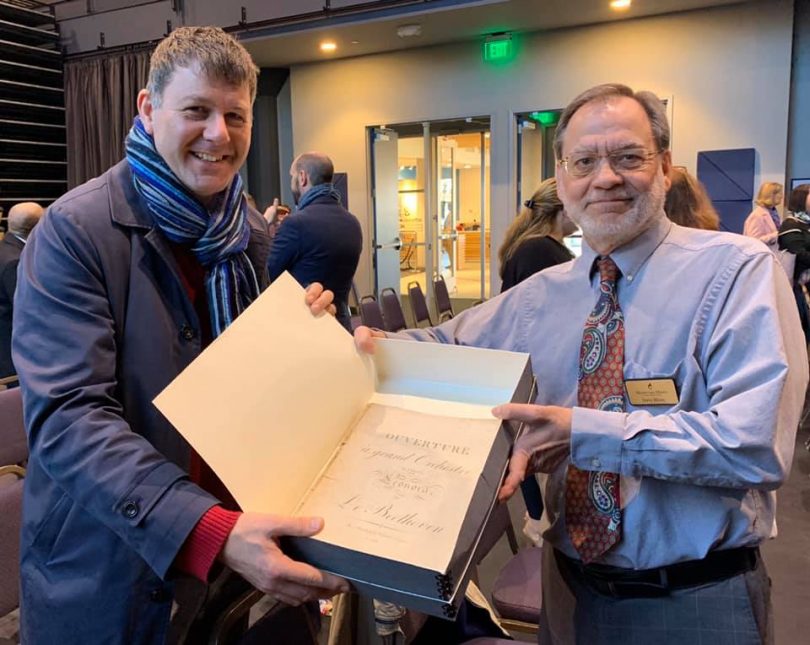 Since 1953, the Peanuts character Schroeder has always reminded us that December 16th is Beethoven’s birthday. Although Lucy doesn’t really care about Beethoven, she feigns her interest because she’s sweet on Schroeder. In the weeks before Beethoven’s birthday in 2019, local arts organizations and educational institutions in Winston-Salem met to coordinate and collaborate events throughout 2020 to commemorate the 250th anniversary of the birth of Ludwig van 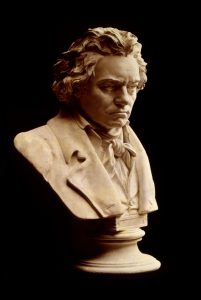 While preparing for these meetings, Moravian Music Foundation Research Librarian David Blum made some fascinating discoveries. Actually, we should probably call them realizations. We knew we held the music of Beethoven in various collections in Winston-Salem and Bethlehem. What we didn’t know was that we hold a number of first editions of Beethoven’s music!

The first such realization was a first edition of Beethoven’s 6th Symphony (known as the “Pastoral Symphony”) in an 1809 edition by Breitkopf & Härtel (Leipzig) based on printing plate numbers found on the publication. David contacted a local Beethoven expert, Dr. David Levy at Wake Forest University, who put him in touch with a colleague at the Beethoven Haus in Bonn, Germany (a museum and research center at the birthplace of the composer).

Searching online catalogs OCLC (part of WorldCat) and RISM (Répertoire International des Sources Musicales) (on which we share the MMF’s holdings) we found that only a few dozen libraries and archives around the world own copies of the original edition of Beethoven’s Sixth. Besides the Beethoven-Haus, other copies reside at institutions such as the National Library of Poland, Oxford University, the British Library, Gesellschaft der Musikfreunde, and the National Library of Austria (Vienna); and in the U.S.: The Free Library of Philadelphia, and the Ira F. Brilliant Center for Beethoven Studies, San José State University. 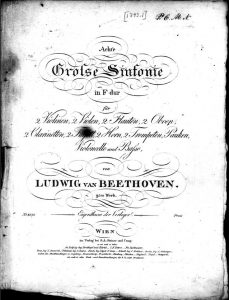 Since that first realization, David examined other Beethoven scores to find that the Moravian Music Foundation holds as many as five first editions: the 8th (1817) and 9th (1826) Symphonies, “Weihe des Hauses” (The Consecration of the House Overture, 1825), and the overture now known as the Leonora #3 (1810), which was one of Beethoven’s several attempts to compose an overture to his only opera, “Fidelio.” These last four are part of the Philharmonic Society of Bethlehem Collection in the Bethlehem archives.

The Moravian Music Foundation is planning to host several chamber music concerts featuring Beethoven’s music from its collections during 2020. These will highlight arrangements of Beethoven’s music by his contemporaries during his lifetime which Moravians brought to America.  Concerts will be announced through the MMF website (www.MoravianMusic.org), the MMF’s social media outlets and our newsletter.

David Blum is research librarian for the Moravian Music Foundation based in Winston-Salem, N.C.

The featured image above is Tim Redmond (left), music director of the Winston-Salem Symphony with David Blub at the press conference kick-off to BTHVN-RocksWS, displaying the 1810 Lenora #3 Overture in its first edition.