Even in communities that were once settled by Moravians, but where today no Moravian church any longer exists, Moravian traditions and customs remain a powerful connection to the past. One such community is the small town of Moravia, Iowa, located in southeastern Appanoose County, which features a Moravian star on its newly designed website.

With a population of about 655 residents, Moravia was settled by four Moravian families who left Salem, North Carolina, in 1849 and made it as far as Fairfield, Iowa, before winter set in. On June 27, 1850, four Moravian brethren, Joseph Stauber, Edward Reich, Ephraim Conrad, and Theophilus Vierling, who had brought their families to Iowa by covered wagon, laid out the town of Moravia with a pocket compass and tapeline on forty acres of land, purchased with funds provided by two single Moravian women from Salem. The two benefactors, Lucinda Frederica Bagge, the daughter and last member of a wealthy Salem family, and Anna Catherine Stauber, the sister of Joseph Stauber, directed that the money from the sale of lots be used to build a church.

The pioneers named their town Moravia after their religious faith and officially incorporated the city on July 15, 1851. That same year the settlers built and dedicated a church. However, for three years they were without a pastor until Hiram Meyers from Gnadenhütten, Ohio, came in 1854 to minister to them and to carry out mission work in Richland, Iowa.

When farm families needed more land, they often moved farther west. As membership declined, many small frontier congregations were forced to close, and this was also the fate of the Moravian Church in Moravia, Iowa. In 1878, the congregation was disbanded and the church building was sold to a local farmer, who moved the structure to his farm and converted it into a barn for his animals. The few remaining Moravian families joined either the Presbyterian or Methodist churches in Cumberland, Iowa, or the Salem United Brethren congregation. 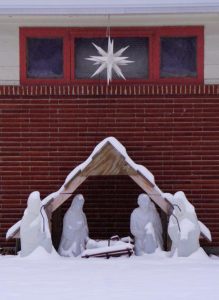 However, the residents of Moravia continue to commemorate their Moravian heritage, especially at Christmas. For example, they still celebrate the season of Advent by decorating their homes and displaying the Moravian star until Epiphany. On the first Sunday of Advent towns people visit four or five homes on the “Moravia Tour of Homes,” to view their Christmas decorations, thus carrying on the old German custom of the “Wandelabend” or “evening walking tour.”

Just as the original founders of Moravia set up a nativity scene or “Putz,” as it is called in German, in their church at Christmas, residents today construct elaborate manger scenes with hand-painted or carved figurines of Mary, Joseph and the baby Jesus, the angels, the shepherds with their sheep, the three Wise Men, and a hidden wild animal to represent King Herod.

After horse and wagon rides through Moravia to see the Christmas lights and decorations, the tour usually ends with a traditional Moravian love feast or “Liebesmahl.” As i 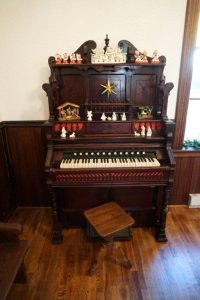 n love feasts in many Moravian Churches around the world, the residents of Moravia sing Christmas carols to the accompaniment of a trombone choir or other local musical talent as they are served sweet Moravian buns and coffee.

The city of Moravia, Iowa, is currently commemorating its Moravian roots by building a large Moravian star of stepping stones in its town square, at the center of which is the Community Building and the library. Each stone can be purchased in memory of a family member or loved one.

Dr. William E. Petig is a lifelong member of the Ebenezer Moravian Church, Watertown, WI. He recently retired from Stanford University, where he taught German for more than four decades.