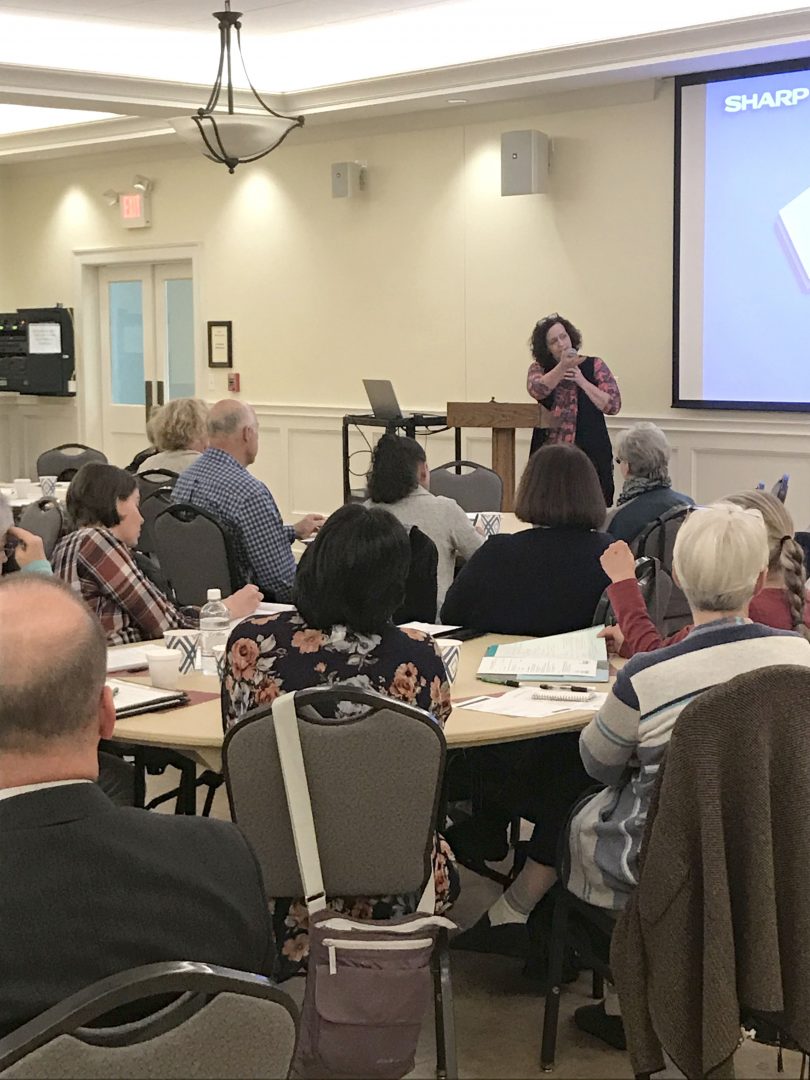 Church isn’t about the building Christians gather together in to worship the Lord. In fact, the word church in the Bible was translated from the Greek word ekklesia, which means “assembly”, “congregation” or “meeting.” It is the act of gathering with one another that makes church what it is, not the four walls.

But those “four walls” are an important part of many congregations’ identities. In January, the Southern Province Board of Cooperative Ministries sponsored “Facilities Stewardship,” a workshop designed to answer questions like, “How can we better use our church building?” “What do we do with our aging building but shrinking budget?” and “How can we reimagine the use of our church facility?”

Held at Calvary Moravian Church in Winston-Salem, the event featured presentations from three Southern Province Moravian churches – Calvary, Union Cross and Peace. Each church shared how they began to look at their buildings differently and use their assets in different ways.

In opening the session, Ruth Cole Burcaw, executive director of the Board of Cooperative Ministries reminded attendees that, “Churches are tools for facilitating faith. We want to integrate our buildings so that they are not just serving God’s people now, but they can position us for whatever there is to come.”

Calvary and the community

Calvary Moravian church was the first of the three to present. Bishop Lane Sapp, senior pastor of Calvary, reminded attendees of the workshop that Jesus demonstrates how to be neighborly, that we, as Christians, need to welcome and include our neighbors by our words and actions.

Amanda Moody-Schumpert, director of music and congregational ministries at Calvary, spoke about how the church wants to become a shelter for the community without regard as to whether or not the people would join the church.

In 2015, a new independent bookstore, Bookmarks, opened up across the street from Calvary. With the size of the building and space for people to meet, Bookmarks partnered with Calvary, where they began to use the church space for author and book talks. Calvary also became a significant venue for the annual Bookmarks Festival.

Around the same time, Piedmont Opera opened offices down the street from Calvary. The congregation invited them to use the space at the church for concerts and rehearsals. The church is compensated both financially and by in-kind donations. Sometimes guest musicians will come and perform on a Sunday morning while the financial contributions help with upkeep and building needs.

Calvary is not viewed as a fortress in the community but is an open and welcoming space. “The building is alive all the time, not just Sundays and Wednesdays,” said Amanda. “There are more issues with the space being used all the time, but the Board of Trustees has been open-minded and stepped out of their comfort zones to allow this change to happen.”

“The economy of the “church” is changing,” said the Rev. Chaz Snider, associate pastor at Calvary. “Right now, giving comes from a percentage of money a person gives. The church needs to look at ways to fund itself differently than it used to. Sunday mornings may not give enough money to sustain a church.”

Dan Johnson, chair of the Board of Trustees of Union Cross Moravian Church, discussed the challenges with their campus, which includes 10 buildings. His church is steeped in history dating back to the 1860’s and has gone through many additions and revisions over the years.

According to Dan, in the past, if something needed to be fixed and the church couldn’t afford it, they would wait and save money until they were able. This meant that when there was a leak in the basement, it took three years to come up with the $38,000 to repair the problem.

“Union Cross looked nice from the outside, but like an onion, once you begin to peel back the layers, the church began to see what was really wrong,” said Dan. To rectify this, Union Cross undertook a future spend analysis, with building audits of the entire campus, including each building on the property, from the rooftops to the plumbing and everything in between.

They saw that it would cost $1.8 million to replace and/or fix everything on the list. After some discernment, Union Cross decided to put together a 30-year plan to put a percentage of money aside every year for the items necessary.

“How do we pay for this?” asked Dan. “We change the way we think about our assets, what we have and how we use them. We needed to think about change management; If you don’t have a sense of urgency, things won’t change.” In sharing their vision with the congregation and empowering members to get involved, Union Cross’s board came up with short-term wins/goals so that people could see change was happening.

Union Cross also recognized a need to lower expenses and increase income.  On the expense side, they are installing solar panels to help reduce their energy bill while partnering with a local energy company who did an energy audit and installed devices to help monitor energy the church uses. For revenue, Union Cross opened a seasonal store for Dewey’s Bakery, where a percentage of sales benefits the building fund, and a thrift store, which helps bring in money that is used to improve the church facility.

Peace: a congregation on the move

The third church to present at the workshop was Peace Moravian Church in Charlotte, N.C., with Pastor Rusty Rushing. In 2015, in part due to unsustainable revenue, Peace sold their church building to Hope Community Church (Presbyterian), with an agreement that Peace could continue to stay in the property for two years as they discerned their next steps.

During his presentation, Rusty discussed his mission to help the congregation move the church into the future. Peace members explored the book, Shift: Three Big Moves for the 21st Century Church, by Mark E. Tidsworth, and through their study, learned what God had in store for Peace Moravian Church.

The congregation needed to move from “member-identity” to “disciple-identity.” They looked at their assets (who the people are, what are their trades, etc.) and discovered more than a third of their members had healthcare related backgrounds. This revelation brought them to Brightmore, a retirement community, as a place where they worship twice a month, inviting residents to join them. The success of this new ministry has brought them to another retirement community for the other two Sundays a month.

According to Rusty, it was a difficult journey, grieving the dreams they had for their building. They are now looking at church in a new way: they no longer see church as a building, the see themselves as the church-—a missional church that has created sacred partnerships following the leading of God.

Thanks to Sue Kiefner, communications assistant, for this summary of the event.  The Board of Cooperative Ministries recorded the presentations and will post them to their YouTube channel in the near future.