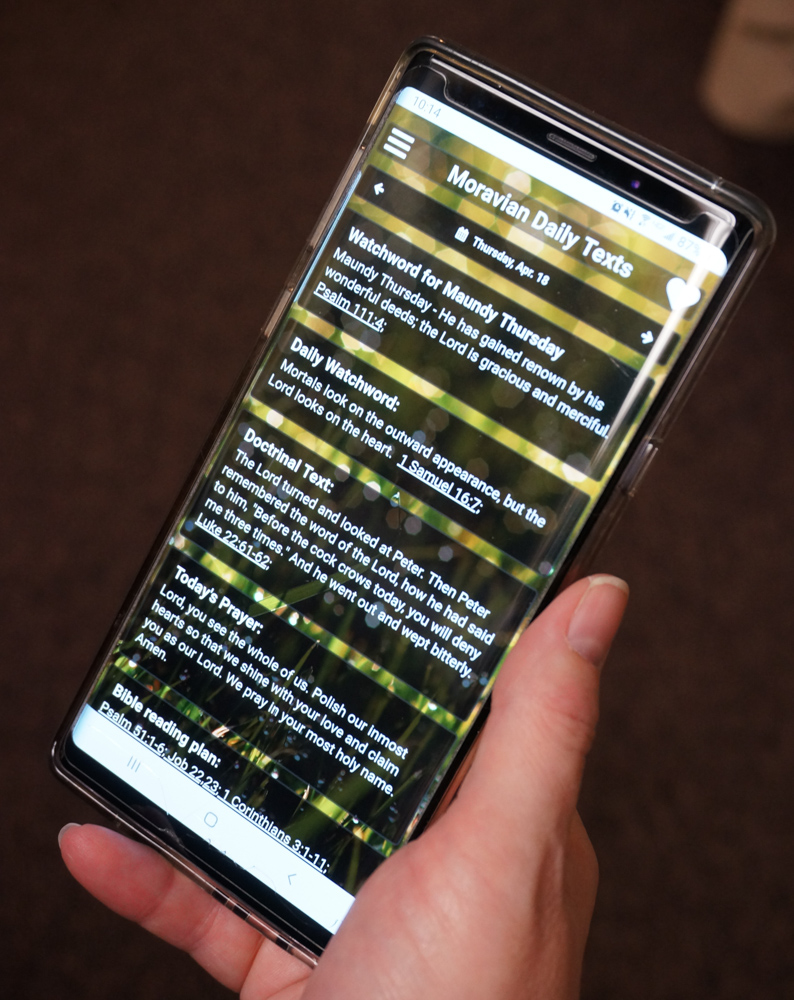 Developed by Stephen Kish, a member of Edgeboro Moravian Church, in cooperation with our team at the Interprovincial Board of Communication (IBOC), this mobile app offers a new way to interact with the Moravian Daily Texts on your smartphone or tablet.

We had considered an app for the Daily Texts for several years; however, for funding and expertise reasons, and given the fact that the Daily Texts are available in a wide variety of digital forms (eBooks, e-mail, website, etc.), we had set the idea aside.

But one afternoon in 2017, Steve, whose day job is as a programmer for a local engineering firm, came to me with a proposal to develop an app as a programming exercise. I jumped at the chance to see what he could create and provided him a year’s worth of Daily Texts to work with.

Several weeks later, he returned with the first prototype. Over the next several months, we worked on the interface, adding features, working out bugs and trying new ideas. Along the way, we learned a lot, especially the process of getting apps approved through the two main distribution channels for such a product: Google Play and Apple iTunes.

This spring, after several attempts at bringing the app to fruition, Steve’s efforts helped us finally get it approved. It launched in late April and has been building a following ever since.

Thanks to Steve’s perseverance and programming skills, the Moravian Daily Texts App is now available on the App Store for Apple iOS devices and Google Play for Android devices for $1.99.  (Search “Moravian Daily Texts 2019” to find it on each store.)

So whether you prefer a printed Daily Texts, an eBook version, a daily e-mail or now an app on your smartphone, you can receive the “daily message from God that is new every morning!”